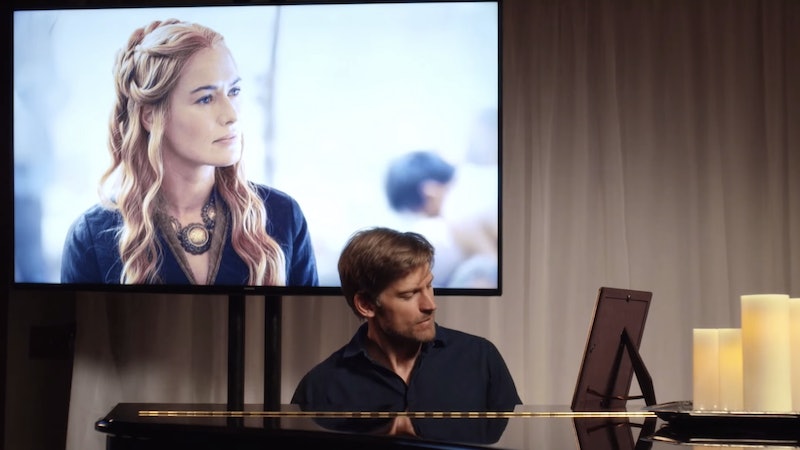 As a diehard Game Of Thrones fan, I know I'm still reeling from the awesomeness of Peter Dinklage's upbeat song about dead Game Of Thrones characters — but this will certainly grab your attention away from that, at least for the time being. In collaboration with Coldplay for NBC's upcoming Red Nose Day (a charity event dedicated to raising money for kids and teens in poverty), Nikolaj Coster-Waldau, sang a Game Of Thrones -themed song about his character Jaime Lannister — specifically, a ballad directed at Cersei Lannister... about Jaime's long-lost hand.

As Game Of Thrones fans know, Jaime Lannister's right hand was cut off midway through Season 3. As he was previously commended for his skill in sword-fighting — with that very hand — Jaime's obviously had a pretty difficult time since the loss of his hand. While this lovely ballad directed at Cersei, with its lyrics like, "could you lend me a hand, 'cause I've only got one," and "I miss my fingers like you miss your son," sadly isn't canon, it does such a great job of delving into Jaime Lannister's psyche that it should be. I mean, I know Game Of Thrones isn't the most musical of shows, but the cast clearly has the talent! Utilize it, HBO!

Check out Coster-Waldau's video below:

And for after, in case you missed it, here's Peter Dinklage's:

The performances — in addition to others — will included in Game Of Thrones: The Musical, which will feature cast members performing alongside Coldplay as part of Red Nose Day on Thursday.