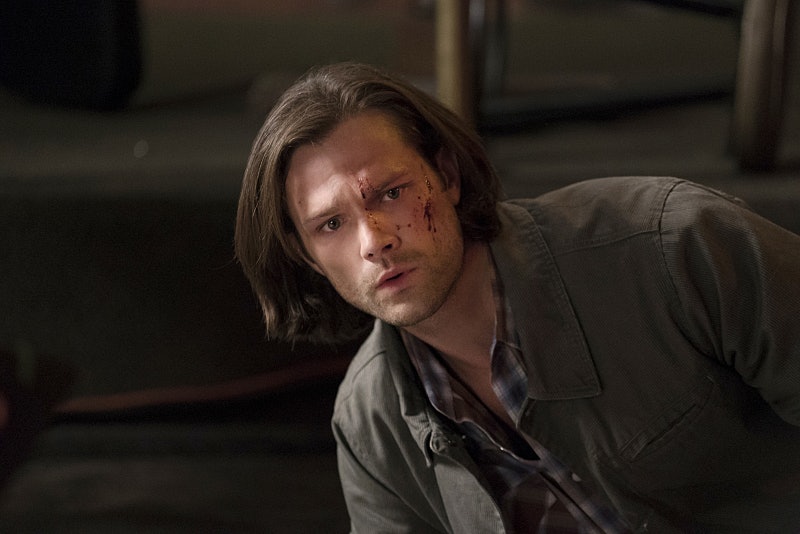 Hello darkness, my old friend. Alright, now that that joke is out of the way, let's get to the real emotions I'm feeling about this Supernatural Season 10 finale, shall we? WTF guys?! Is the world basically ending right now? Because it sure does feel that way. I don't know if things have ever been so ominous for the entire planet in a Supernatural season finale before, and yes I am taking into consideration the Season 8 finale when the angels fell from Heaven, as well as the Season 4 finale when Lucifer was sprung from cage (sadly thanks to the help of both Sam and Dean). Now that the Mark of Cain has been lifted from Dean's arm (hooray!), it has been expelled into the universe, causing the Darkness to rise up and start to devour the land. So what is this terrifying darkness and what will its arrival mean for the show and the Winchester brothers? And what's going to happen with Castiel, Rowena and Crowley? As current Supernatural showrunner Jeremy Carver said himself after the Season 10 finale, things are going from bad to worse in Season 11.

First some backstory about the Darkness that we learned from the finale. No it's not the band responsible for the song "I Believe In A Thing Called Love." Dean summons Death to ask Death to kill him or to help him get rid of the Mark. Death says he refuses to do it because it will release the Mark into the universe and cause the Darkness. So what is it? Death explains that before God created the Earth and people, there was a darkness, an evil that spread all over and needed to be contained. So God gave Lucifer the job of containing the Darkness and he passed it on to Cain who passed it on to Dean. Unfortunately if that Darkness were to get out, Death explains, it would basically be catastrophic. Great.

While Dean and Sam work out some familial issues (as per usual), Crowley and Castiel are hard at work finding the ingredients necessary for the spell Rowena can use to get the Mark off of Dean's arm. Why Sam doesn't bother to call this whole process off after hearing about the foreboding "Darkness" is beyond me but obviously all he can think about freeing Dean from his horrible struggle with the Mark. Rowena succeeds at getting the Mark off of Dean (at some personal cost to her, but whatever), and at first it looks as though everything is ok. But this is Supernatural and we're not stupid. Immediately after the Winchester boys step outside, they notice that the sky is changing creepy colors and red lightning shoots down in different areas of the land. Out of the land comes dark mists — it looked a lot like demon mist actually — and it formed together and began spreading out into the world with Dean and Sam getting trapped in it.

Here's what I think will happen next: The worst evil imaginable. Considering what the Mark did to Dean, what it made him become, could the Darkness spread across the world and turn people into the same kind of monster Dean became the more and more he had the Mark? Or perhaps the world will turn into chaos as people become evil and try to kill each other but can't because Dean killed Death. That turn of events would certainly be good news for Crowley who ended the season with his mother using witchcraft to bend Castiel to her will to kill Crowley. All I know is that things are about to get worse than they've ever been. And nothing is going to stop me from tuning in next season.