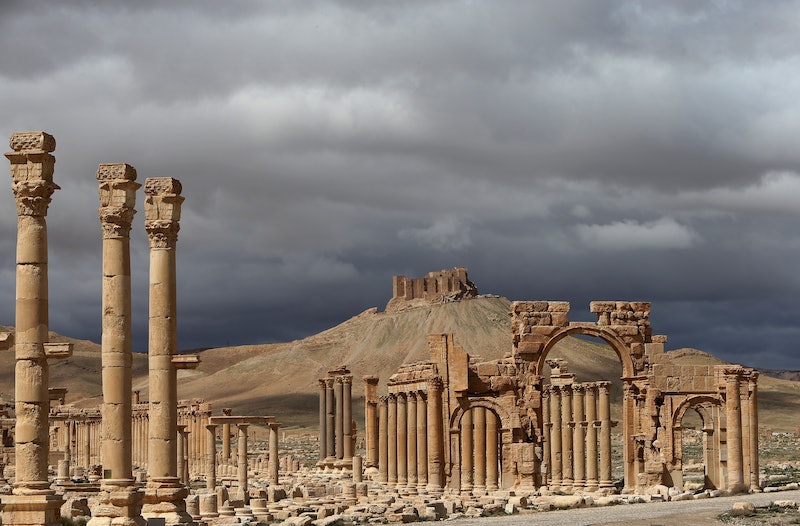 After their most recent victory, ISIS now controls half of Syria’s territory. The militant extremist group, calling itself Islamic State and also known as ISIL or Daesh, seized control of the historic Syrian city of Palmyra on Wednesday, after a week long siege that ended with the breakdown of forces loyal to Syrian president Bashar al-Assad. The strategically important victory comes just five days after ISIS captured Ramadi, the capital of Iraq’s Anbar province, and has left ISIS in charge of vast swathes of Syria; their control now stretches from Palmyra to Raqqa and Deir ez-Zor in the west.

The Syrian Observatory for Human Rights estimates the extent of Syrian territory under ISIS control to be approximately 95,000 sq. km, according to The Guardian. This area is more than half of Syria’s landmass. The desert city of Palmyra, home to a population of 50,000, is of strategic value due to its location: it sits squarely amongst key gas fields, and at the juncture of several major highways. The push for Palmyra has secured ISIS the nearby Arak and al Hail gas fields — which power many of the Syrian regime’s outposts to the west — meaning that the extremists now control much of Syria’s electricity supply.

The capture of Palmyra takes on an extra layer of significance, given that the modern city is adjacent to the UNESCO World Heritage site of ancient Palmyra. ISIS has previously destroyed, with apparent relish, ancient pre-Islamic sites and artifacts across the territories it has captured. Now, observers fear the same fate awaits Palmyra — a city that was once one of the most important cultural hubs of the ancient world, and a caravan stop on the Silk Road. Maamoun Abdulkarim, Syria’s antiquities chief, had previously described the fight for Palmyra as a “battle between civilization and barbarism,” according to BBC News. Now, this particular battle has been lost.

“There are no forces to stop them [entering the ruins],” Rami Abdul Rahman, director of the Syrian Observatory for Human Rights monitoring group, told The Guardian. Local activists reported to the newspaper that militants had already imposed a curfew by Thursday, and were searching the city for any remaining Assad loyalists. The militants had reportedly also killed many members of the Shaitat tribe, a group that had previously rebelled against ISIS control.

The potentially sacking of ancient Palmyra has more than simply historic resonance. ISIS has also been known to make a hefty profit from looted, priceless antiquities — using the cash to finance its activities. “The fighting is putting at risk one of the most significant sites in the Middle East,” Irina Bokova, director general of UNESCO, warned in a Wednesday statement.

The ISIS surge into Ramadi and Palmyra is testament to the group’s resilience; less than two months ago, Islamic State militants were forced out of Tikrit, in Iraq. Last weekend, ISIS fighters rolled into Ramadi — only 110 miles south of Tikrit, and the victory has been hailed as a bitter blow to the Iraqi government. Dexter Filkins, writing in The New Yorker, argues that Ramadi's capture also highlights the flaws in the U.S. campaign against ISIS, the limitations of their air campaign. “What happened in Ramadi over the weekend revealed just how misplaced any optimism about Iraq really is,” Filkins writes.

Anbar province, of which Ramadi is the capital, is the largest governorate in Iraq and the only Sunni-dominated one. Filkins points out that with the capital’s capture, most of the populated areas of Anbar are under ISIS control. Ramadi is only 70 miles north of Baghdad, bringing ISIS unnervingly close to the Iraqi capital.

Meanwhile, in neighboring Syria, ISIS controls most of Raqqa province, the main city of which is the proclaimed capital of the Islamic State. Their influence also extends through most of Deir ez-Zor, segments of Hassakeh and areas around Aleppo, the majority of the Syrian desert, some of the Homs countryside, and the Yarmouk refugee camp in Damascus. Palmyra is the ideal location from which to launch a hypothetical assault on Homs, The Daily Beast reported. Homs was a hotbed of revolutionaries early on in the country’s civil war, and is now largely controlled by Assad's forces. From there, Damascus is a mere 100 miles south.

The loss of Palmyra throws the capability of Syria’s government troops and allied militia groups into doubt, given their surprisingly rapid collapse. But, as The New York Times reported, the capture of Palmyra also places the U.S. in a tricky position — conducting air strikes against the militants in that region (previously government-controlled) could be seen as directly aiding Assad, a leader whom Obama has previously said should step down.