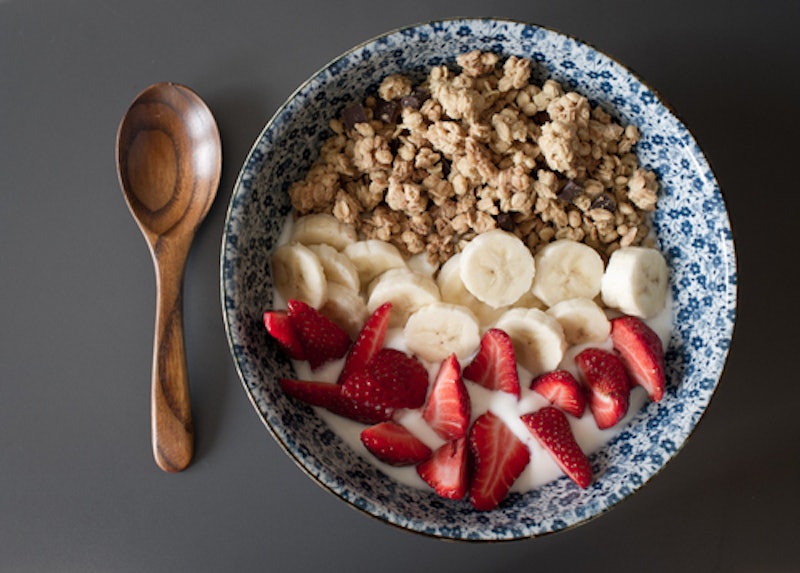 If you’re a picky eater — or even if you’ve just heard a lot about the merits of food you hate, like mushrooms or spinach, and want to know what all the fuss is about — there’s good news: it’s perfectly possible to hack your taste buds and grow to love the foods that you currently loathe. Picky eating habits often emerge in childhood, when many children go through a phase called the neophobic period, where they hate anything new. During this period, introducing new foods to a kid will garner a very upset response — and if parents don’t push the issue, neophobic kids can grow into fussy eaters. But if that's you, brace yourself, because your uptight tongue is absolutely ready to be rocked. You just need a little strategy.

The science of taste buds is still developing — but the existing research supports the idea that most people can change our taste preferences. There are really only two factors that could stand in the way of you rewiring your palate: genetics, and whether you're a supertaster. A small subsection of the population (possibly up to 25 percent) are "supertasters" — meaning that they have taste buds that are exceptionally sensitive to bitter tastes, including green vegetables and coffee. Little research has been done on whether it’s possible to change a supertaster’s taste buds, but it looks unlikely. But even if you're not a superaster, genetics can play a role in your food preferences: certain taste preferences are thought to have been formed in the womb (according to some studies, infants who've been "fed" carrot juice via their mothers in the womb showed a liking for carrot-flavored food once they were born).

So whether you want to learn to like vegetables, or just adjust to your mother-in-law's weirdly sour desserts, this is your five-step plan for hacking your palate. Soup's on!

If you want to learn to like a new food, at first, you're just going to have to eat it. While there are ways to make off-putting foods more palatable (we'll get to those techniques in a minute), exposure is the only surefire way to make yourself like something — because humans are creatures of habit and will learn to like whatever they're repeatedly given (because otherwise, existence would be miserable).

This line of thinking has been backed up by numerous studies. Children need to be exposed to a new food at least 15 times before they start to adjust to it, according to Psychology Today, and adults forced onto low-sodium diets for medical reasons have reported that lower-salt foods taste different and less bland after several weeks of exposure. So if you want to do this, you're just going to have to stick with it for a while. However, there are ways to mediate the experience.

If you really hate a food, there is one fairly simple and reliable trick for making you like it more: combine it with a nice taste, and you will eventually begin to appreciate the hated food on its own. Science magazine reported in 2013 that children who were introduced to sweetened broccoli gradually began to like the actual taste of broccoli itself better.

But, of course, not everything can be covered in sugar. Find other tastes and seasonings that you like — soy, cinnamon, garlic, anything strong but not totally overwhelming — and pair it with your hated food. Then gradually, over time, lessen the amount of "sweetener".

A primary piece of information you'll need to actually change your palate is: what is it specifically about the food(s) that you don't like that makes you not like it? This may seem like a stupid question — "the taste, dummy," you may be saying — but it's actually more complicated than that. It may actually be its smell, its appearance (humans are highly influenced by the appearance of food), how it feels between your teeth, even its resemblance to another food you don't like. Humans are also highly prone to making emotional judgements about food: if you once had a horrible experience with a food, even if it wasn't related to the actual taste, chances are high you won't like it any more.

This information will help you adjust your exposure to fit the problem. If it's the appearance you don't like, fiddle around with the plating; if it's the smell, focus on strong-smelling "sweeteners;" if it's the texture, look for recipes that can change it. And what about the taste don't you like? Is it too bitter, too sweet – and how do you think you could counter-balance that?

This seems like an impossible challenge: how could you cook a food you don't like in a way that excites you? The key is taking all the tips above, and fusing them into a series of recipe experiments that might tickle your taste buds. If you're seriously invested, see if you can make it work by cooking the hated food in diverse ways that target exactly what you don't like about it.

The good news about the internet is that it can connect you with a wide variety of people who once hated eating the chosen food as much as you do. (Unless it's caviar or roast hummingbird, in which case the common man cannot help you.) Scour the web for recipes by converts and see what might please your own palate.

In an article about food tasting for British newspaper The Guardian, "food developer" Barb Stuckey advised us to do the direct opposite of avoiding the foods that we loathe: instead, she suggested that we try to become an expert on the flavors and nuances of the food we hate. Become that dude who tastes a glug of wine and pronounces tastes of blueberry, maple and a hint of angry musk ox — except with food. Obviously, this can't happen until you've got over the initial disgust threshold and begun to do targeted work on introducing this food into your life. But learning as much as you can about the taste, texture and origins of the object of hatred might begin to replace your disgust for the food with a grudging fascination with its complex taste. We hope.