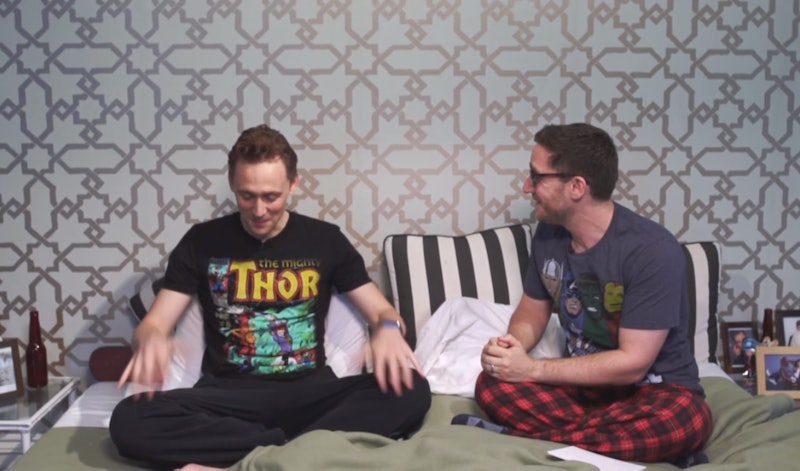 Gangly Shakespearean Brit and generally pleasant human Tom Hiddleston is on a press tour for Thor: The Dark World right now, which means that we see new things that he's said and/or done every day, which subsequently means that we spend much of our day sobbing into our pillows because he's so damn cute. Hiddleston (or Hiddles, as he known on tumblr and in our hearts) sat down with MTV's Josh Horowitz this week for a sort of pseudo-sleepover that we're not entirely convinced wasn't created entirely from our fantasies. In it, Hiddles plays F***/Marry/Kill and Truth or Dare, dances (snake hips!!!), and reveals that he, Tom Hiddleston, saw Thor co-star Chris Hemsworth naked.

Wait, what? Did I stumble onto Archive of Our Own??

The nakedness was apparently in the context of a photo Hemsworth's wife took of Hemsworth and their baby daughter to illustrate how small the baby was. They showed it to Hiddleston, and hence the witnessing of the naked. Still, Hiddles, you can't just toy with the Internet like that, we've got feelings, too.

Meanwhile, I'm pretty sure witnessing Tom Hiddleston have a pillow fight that I am not a part of has triggered some kind of dissolution of my mental facilities.