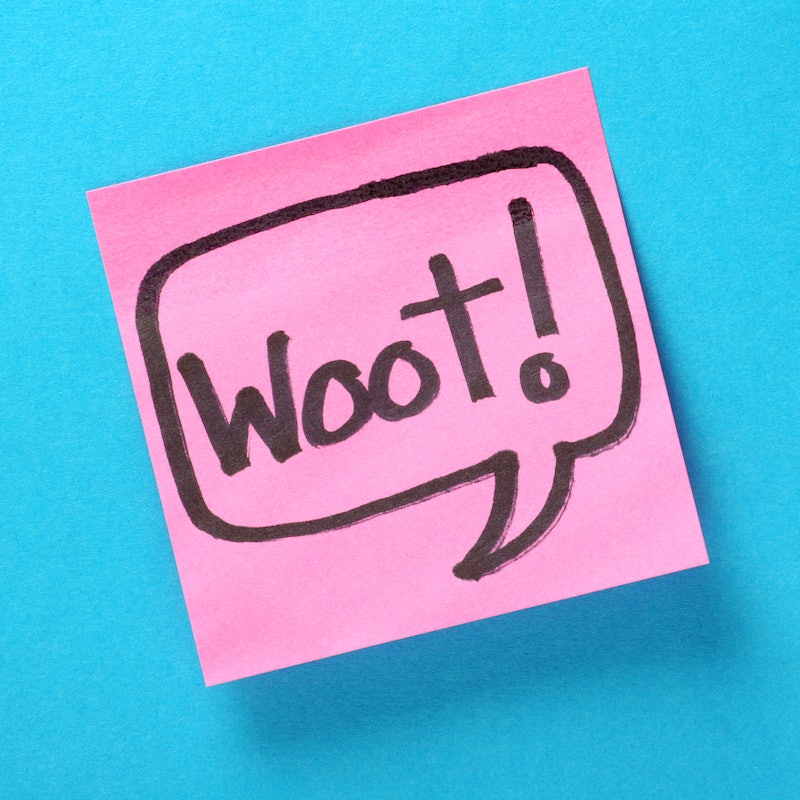 We've been looking at a lot of modern slang terms recently, so for Throwback Thursday, let's delve into the past a little. We all know what “woot” or "w00t" means — it expresses excitement or happiness, functioning both on the Internet and in real life as a variation on “yay!” — but where does “woot” come from? (And yes, there's a reason I'm spelling it with actual letters, as opposed to numbers — more on that later). The short answer is also somewhat unsatisfying: We have some ideas, but we don't know for sure. But hey, at least we can theorize, right? Here's a look at some of the highlights and an assessment of where we are with the term now. W00t, w00t!

In a post on his website titled “The Real History and Origin of Woot and w00t,” lexicographer and journalist Grant Barrett writes that “whoot” and “woot” occasionally popped up as “onomatopoeic representation of video game sounds” in news stories during the early '80s; however, according to Barrett, the earliest “clear-cut use of the word” appeared courtesy of an entertainment publication titled Whoot! Based out of Atlantic City, NJ, Whoot! was begun in 1974 by Lewis B. Steiner and his parents, Herb and Marcia — and somewhat amazingly, it's still around today, although in a slightly different form. Whoot! changed hands in 2003, with its name subsequently being changed to Atlantic City Weekly. I haven't been able to find the original source for this quote, but Barrett writes that Atlantic City Weekly editor Michael Epifanio once revealed the origins of the paper's name as being coined by Lew Steiner: Whoot! came from a description of the staff as “night owls who would pull all-nighters to scout out the bars, clubs, and restaurants and then send the publication out to print.”

“Woot's” most familiar form, “w00t,” comes to us as a part of “l337 speak.” “L337” (or “l33t,” or “leet”) itself is a bastardization of “elite”; having “elite” status on a Bulletin Board System, or BBS (remember those?) gave users access to files, folders, and special chat rooms. L337 speak is characterized by a lot of different things, including the use of suffixes like “-xor” — but generally it's most identifiable by the way it substitutes numbers and symbols for letters. “W00t,” used in the way we know and love, is an expression of triumph, victory, or delight with the O's swapped out for zeros. While l337 speak dates back to the '80s, there's no definitive word on when “w00t” first entered the vernacular.

Know Your Meme is a good place to go for a quick, digestible primer on l337 speak, although be aware that what's there is just the tip of the proverbial ice berg. And if you want to see it in action? Just watch that video up there. You might remember it from the early 2000s. It is still one of my favorite things ever. Just sayin'.

In March of 1993, 95 South's track “Whoot, There It Is” was released; then, a little over a month later, Tag Team's “Whoomp! There It Is” also dropped. These two tracks popularized both “whoot” and “whoomp,” with the latter being an accepted variation on the former.

I have no way verify this one, so take it with a grain of salt; it's interesting all the same, though, so I still feel it's worth a look. According to an Urban Dictionary definition submitted in 2004, “w00t” was “originally an trunicated [sic — I assume the phrase was meant to be “a truncated”] expression common among players of Dungeons and Dragons tabletop role-playing game for 'Wow, loot!'” The definition goes on to say that the term passed from there into “net-culture”; although it fails to specify exactly how that happened, it does note that once it arrived there, its original meaning was lost, rendering it simply “a term of excitement.”

Grant Barrett notes that this particular definition stems from an AdAge article published in 2004 discussing the online retailer Woot.com; however, he also points out that this article is “the only source so far found that connects the word to the term in more than 30 years of the game's existence.” This makes it an unlikely origin story — as Barrett puts it, “Given the popularity of D&D in the '80s, it should have, by all rights, showed up in connection with the term woot long before 2004.”

Some believe “woot” to be a gaming acronym standing for “we own the other team”; and yet others believe it to come from “root,” either used after successfully breaking into a computer system (“woot, I have root!”) or in reference to the administrator user name in Unix-based operating systems. There aren't any reliable sources that support these theories, though, so do with them what you will. Lucille is skeptical, obviously.

Where We Are Now:

Merriam-Webster named “w00t” their Word of the Year in 2007; then, in 2011, it entered the Concise Oxford English Dictionaries, where it is officially written as “woot" (and that's why I've mostly been referring to it as "woot" throughout this post). It has fallen somewhat out of favor these days — personally, I haven't used it regularly for upwards of 10 or 15 years — but many still remember it fondly. Oh, and the aforementioned Woot.com? Check it out. They've got deals on everything from furniture to t-shirts and electronics to wine.

More like this
This Tarot Card Means It's Time To Reach Your Magical Potential
By Brittany Beringer
10 Ways To Be More Empathetic To Your Partner
By Raven Ishak and Lexi Inks
Your Horoscope For October 2022
By Alexandria Lettman
Think Your Partner Is Cheating? These Tarot Cards May Confirm Your Suspicions
By Kristine Fellizar
Get Even More From Bustle — Sign Up For The Newsletter