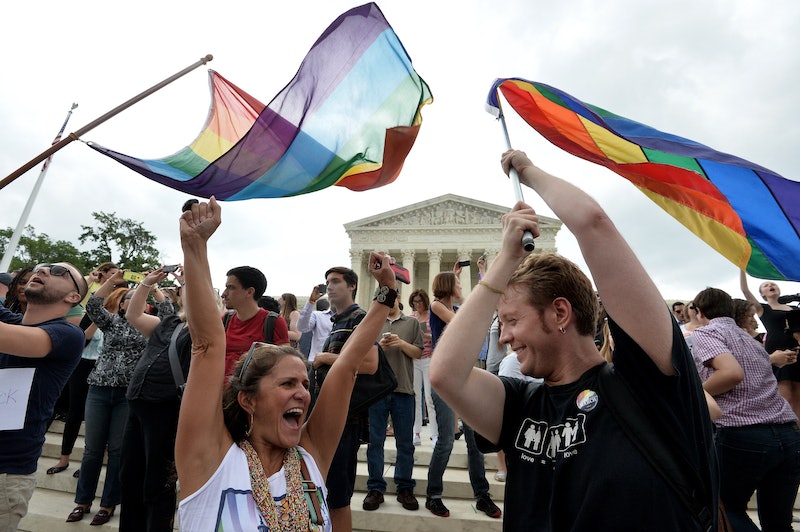 This is truly a day to celebrate in this country. After hearing the case Obergefell v. Hodges at the end of April, the Supreme Court has ruled gay marriage a constitutional right in all 50 states of the good ol' US of A after a 5 to 4 vote. (Justices Anthony Kennedy, Ruth Bader Ginsburg, Stephen Breyer, Sonia Sotomayor, and Elena Kagan made up the five votes; Justices Antonin Scalia, Clarence Thomas, Samuel Alito, and John Roberts made up the four dissenters.) On a societal level, this is a major tide change that puts the country on the right side of history. But perhaps even more importantly, on an individual level, now any couple, no matter where they live, will be able to make their union legally official.

In the ruling, the Court made repeated mentions to the case's link to the Fourteenth Amendment, and its "guarantee of equal protection," as well as a shift in public opinion as times have changed. As it reads:

Continued Justice Anthony Kennedy in the opinion, which told the stories of same-sex couples struggling with their families' finances, health, and child care thanks to an inability to get married:

The history of marriage is one of both continuity and change. That institution—even as confined to opposite-sex relations—has evolved over time ... The nature of marriage is that, through its enduring bond, two persons together can find other freedoms, such as expression, intimacy, and spirituality. This is true for all persons, whatever their sexual orientation.

On April 28, the Supreme Court heard oral arguments for Obergefell v. Hodges , which consolidated four cases on gay marriage from Ohio, Tennessee, Michigan, and Kentucky. Each case challenged the state's refusal to issue marriage licenses to same-sex couples, its refusal to recognize same-sex marriages performed in other states, or both. The Supreme Court agreed to hear the arguments knowing that its ultimate decision would be a sweeping one and change the entire landscape for gay marriage nationwide, not just in the states in question.

The specific effects of its landmark ruling will be seen in the 13 states that still had gay marriage bans in place at the time of its decision. These states, including the four in Obergefell v. Hodges, will now be required to issue marriage licenses to all couples, regardless of sexual orientation, and recognize same-sex marriages performed in other states.

Even before the official ruling, Ginsburg dropped a clever hint about the high court's decision when she officiated the wedding of Shakespeare Theatre Company artistic director Michael Kahn and architect Charles Mitchem. According to The New York Times' Maureen Dowd, who was a guest at the wedding, Ginsburg pronounced Kahn and Mitchem married by the powers vested in her "by the Constitution of the United States." Dowd recounted that she seemed to place particular emphasis on that phrase while giving a "sly look," almost short of a wink.

While some argued that it wasn't so much a hint as it was a show of her own support for gay marriage as a constitutional right, it was clearly a sentiment shared by everyone in attendance, and many more elsewhere. Judging by nationwide polls, the Supreme Court didn't exactly brace for much opposition when ruling in favor of same-sex marriage. According to a Gallup poll published on May 19, 60 percent of Americans support gay marriage, which is a record high since the question was first asked in 1996, when only 27 percent of the country supported it. Gallup's graph, which tracks America's attitude toward gay marriage, is also a pretty astute representation of the country's progress.

Even if not everyone in the Supreme Court agrees. As Justice Scalia wrote in his dissent:

With each decision of ours that takes from the People a question properly left to them — with each decision that is unabashedly based not on law, but on the “reasoned judgment” of a bare majority of this Court — we move one step closer to being reminded of our impotence.

Still, in the last decade, the momentum behind marriage equality has been able to trump any opposition from individual states and legislators, and that momentum has culminated in the Supreme Court's ruling. To most Americans, it was merely the natural — if not overdue — step to take. And the Court realized just that. As Justice Kennedy's Opinion wrapped up:

No union is more profound than marriage, for it embodies the highest ideals of love, fidelity, devotion, sacrifice, and family. In forming a marital union, two people become something greater than once they were ... [The petitioners'] hope is not to be condemned to live in loneliness, excluded from one of civilization’s oldest institutions. They ask for equal dignity in the eyes of the law. The Constitution grants them that right. The judgment of the Court of Appeals for the Sixth Circuit is reversed. It is so ordered.