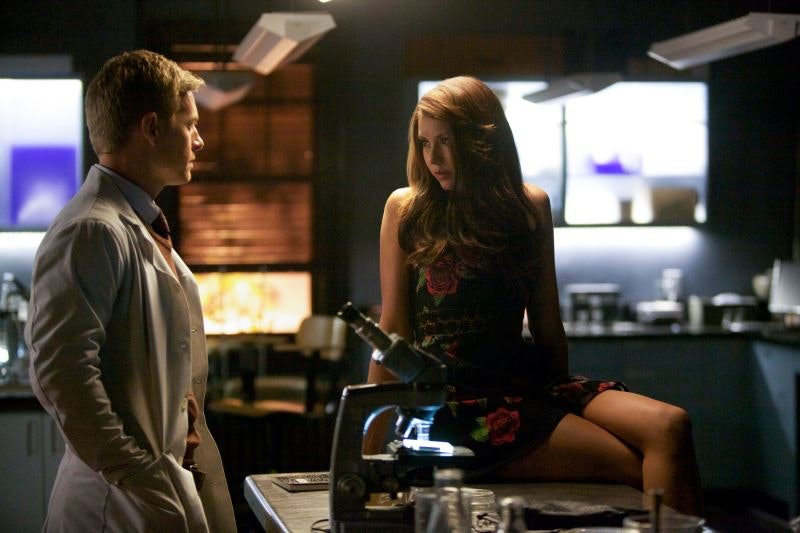 Finally, something incredible is happening on the CW's The Vampire Diaries: Katherine is better at being Elena than Elena is. In lieu of everyone's attention being focused elsewhere (on bringing Bonnie back, killing Silas, Elena and Stefan's destiny), Katherine's carved out a pretty sweet deal for herself. Now that no one's watching her or caring about her well-being, her fighting spirit has finally returned and she's getting everything she needs. What does she need? A warm bed in Elena's old college dorm room and food with Elena's old meal swipe card. I guess being alive for thousands of years teaches one to be incredibly resourceful. Basically, Katherine is pretending to be Elena and, now that she's not complaining so much, she's better at being Elena than the real Elena has been in a long time.

While Elena was busy throwing the ultimate wrench into the plan to bring Bonnie back to life by proving that she's still in love with Stefan, Katherine was getting shit done on the Whitmore College campus by pretending to be Elena. Thus proving that she's better at being Elena than Elena herself could ever be, even though she's human and slowly decomposing while her body catches up to her actual age. So, basically, she should be Elena permanently. Why? Let us count the ways:

1. Katherine Knows Who You Are And She Won't Let You Forget It

After seemingly flying under the radar for a short amount of time by pretending to Elena, Katherine blows her cover in front of Caroline. Obviously, Katherine has no idea that the reason Caroline is packing up the dorm room is that Dr. Maxfield knows that her and Elena are vampires and is threatening to expose them. So when she asks why they have to move out, Caroline figures her out. But she's too smart to let that be the end of her comfortable living arrangement. She knows Caroline (having tormented her time and time again) and she knows that she doesn't give up so easily. Katherine convinces her not to let creepy vampire witch-doctor Maxfield drive her out of college because they can totally take him and he never has to know that she's not really Elena and not really a vampire.

2. She Knows How To Get Things Done

She motivates Caroline to take whatever measures to get Dr. Maxfield on their side. (Elena did try to do this earlier in the season, when she signed them up for his advanced science class in an attempt to spy on him, but it didn't work and he publicly shamed them and threw them out. So she was ultimately unsuccessful.) Again, Katherine's just smarter— she enlists Caroline's help to drug Maxfield, tie him up (of course), and get him all set up to drain his vervain-laced blood. That is, until they're able to get what they need out of him. Simple, easily executed, and ultimately very, very effective. I guess that's what thousands of years' worth of practice will do for your skills.

Well, maybe that's an exaggeration. But the girl definitely knew her way around Maxfield's veins and the necessary equipment for drawing blood samples, telling Caroline, "This isn't my first time at the rodeo." I mean, obviously, she's a vampire. But still, that's a skill that comes in handy when you need to quickly set someone up for the modern-day version of Victorian bloodletting.

Everyone on campus already thinks that Elena's a vampire (thanks to big-mouthed Dr. Maxfield), including the college's secret society, "Augustine." So when "Elena" shows up at their annual gathering and is able to waltz right through the open door without being invited in, no one knows what the hell to do. This might not be a fair reason to say that Katherine is better at being Elena because, well, Elena's not human anymore and there isn't really anything she can do about that, but it's definitely coming in handy with figuring out what the hell is going on on the Whitmore campus. Apparently, the aforementioned "secret society" has its own vampire, aptly named "the Augustine vampire," who Katherine and perhaps all of us should believe is actually Aaron (who's still a super-weirdo, btw).

5. She's Not Afraid To Blackmail You To Get What She Wants

Unlike Elena, who tries and fails miserably to execute even the simplest of plans, Katherine knows exactly what she's doing and she's not afraid to do it. She has absolutely no fear that Dr. Maxfield will find out that she's not actually Elena before she gets to telling him herself. Thus, she has zero trouble blackmailing him into agreeing to help her. When she does finally reveal that she's actually a centuries-old ex-vampire whose now-human body is catching up with her age and she needs Maxfield to help save her life, he's already scared out of his wits that she's going to rip his throat out that he can't do anything but agree to help her. I would say that's a successful scheme if I've ever seen one. Simple and executed perfectly to benefit Katherine while acquiring enough knowledge for Caroline that she isn't deemed selfish. Ten out of 10 goes to Katherine.

Here's to hoping there's more Katherine as Elena and less Elena as Elena when it comes to sorting out the whacky nonsense going on at Whitmore, because that little college girl just can't handle it.

(Also, epic props to Nina Dobrev for not only playing three different characters, but playing one character pretending to be another one. You're nuts, girl.)