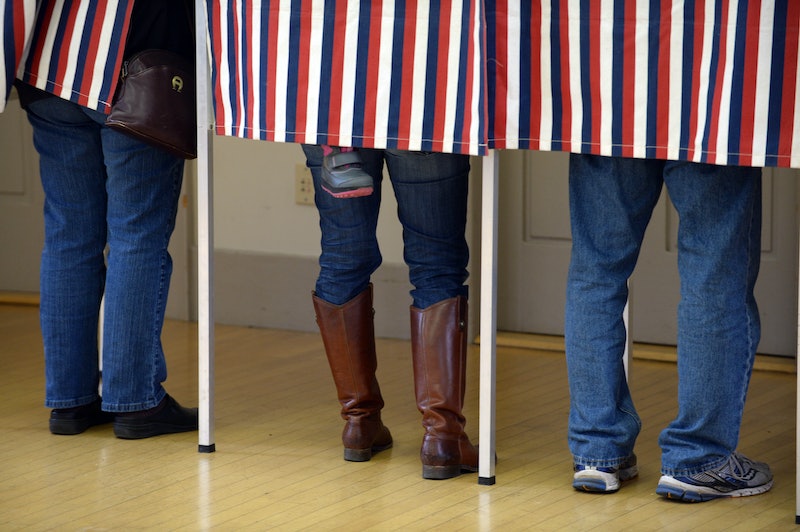 The 2013 study concluded that women's political opinions shift during ovulation depending on our "reproductive goals." Single women, the researchers found, who are presumably not looking to procreate any time soon became more likely to vote for Obama during ovulation. Women in committed relationships, however, became more likely to vote for Romney during the ovulation phase of their menstrual cycle. Either way, the consensus was that where you are on your menstrual cycle does indeed have an impact on your political leanings.

But that was then; this is now. A new study, which surveyed over 2,000 women, concluded based on their findings there is no correlation between ovulation and shifts in political opinions. "We found no evidence of a relationship between estimated cyclical fertility changes and conservatism, and no evidence of an interaction between relationship status and cyclical fertility in determining political attitudes," the study explained. The authors added, "In summary, the relationship between cycle-linked reproductive parameters and conservatism may be weaker or less reliable than previously thought."

Which is weird, because we all know that women are all inherently irrational creatures led around by our hormones. Silly scientists, thinking otherwise!

So how do we reconcile these two very different findings? Well, the second study, conducted by two researchers at Brunel University London, did use a slightly different methodology than the 2013 study, which was done by two researchers from the University of Texas. The new study focused more on deeper political views rather than opinions about contemporary politicians. But it's still a little surprising that one study would show a definite correlation while the other wouldn't find one at all. So what gives?

Well, part of it can probably be chalked up to the fact that scientific findings are not really the same thing as "truth," no matter how much we all like to believe it is. Findings often vary from one study to another, no matter how rigorous your methodology is.

Something you can take away from the whole thing, though, is that the claim of women's politics being affected by our periods is probably overstated. Does your menstrual cycle change how you feel, politically? I mean, I'm sure it's theoretically possible — you do go through subtle hormonal shifts throughout the month, and that can have an impact on how you feel at any given time. But does it cause major changes in the way you think about the issues, or the opinions and political allegiances you have? No. Probably not.

Overall, I'm just kind of exasperated that we have to do experiments about this kind of stuff. I mean, I am in full support of scientists studying whatever they want, especially since important breakthroughs in science often start from asking seemingly random questions. I'm just also very tired of the old, misogynistic cliche of questioning women's judgement and mental stability because of our hormones. Women's brains work just fine, I promise. We aren't somehow more irrational or fickle or whatever else because of our ability to make human life.

So let's maybe just focus our attention on some other fascinating topic, shall we?