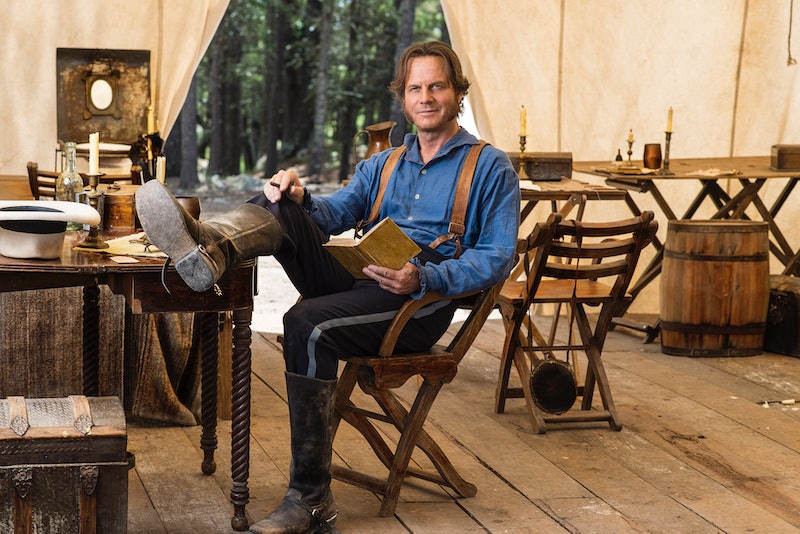 You know what they say about Texas: It never does anything small. So when the History Channel sets out to premiere a miniseries based on a slice of Texas history, well, let's just say you're going to need some endurance. The miniseries in question is Texas Rising, and, to be fair, there's a lot of material there. It's the story of the 1836 Texas Revolution and the beginning of the Texas Rangers. But how much time is needed to watch it all? How many episodes will Texas Rising be?

Here's the schedule: It's going to be a 10-hour event, starting Memorial Day (that's Monday, May 25 for those of you who don't have the day off and therefore don't have it circled in think red marker on your calendars). The total will air in five, two-hour chunks. Like I said, Texas never does anything small. In fact, the story was so oversized that they had to add two hours: It was originally supposed to be an eight-hour series, but History expanded it to 10 when they liked what they saw. “We’re ecstatic with what we’ve seen so far from production,” said Dirk Hoogstra, Executive Vice President and General Manager of HISTORY & H2, said in a press release. “I can’t think of a better way to kick off summer than with a big television event that’s sure to resonate with our fans.” So, what other oversize pleasures can you expect to find in Texas Rising?

Quite literally. If you're into film-techie stuff, Texas Rising was filmed in a 235:1 shooting ratio (or CinemaScope), and shot in 6k digital for a deeper, sharper focus. If that sounds like gibberish to you, just know that it means that the picture will be shot it the same format it would if was a movie being shown in the theater. "Westerns are romances about people in a landscape,” director Roland Joffé said in a press release. “By shooting Texas Rising in CinemaScope, we will be bringing this rich and exciting cinema experience right into your living room."

Another way Texas Rising is more like a theatrical movie than a TV movie is that it's releasing a soundtrack album — something a lot of movies aren't even doing anymore. The big song they're going to be flogging is the series' theme, "Take Me To Texas,” performed by George Strait and written by Brandy Clark. But I'm secretly more excited to hear new songs from José Feliciano (aka the "Feliz Navidad" guy). There will also be a cover of Tom Petty's "Won't Back Down" by Kris Kristofferson, who's in the movie (as Andrew Jackson!).

Seriously, there are a ton of people in this thing — this photo doesn't capture them all — and they're mostly dudes. And they come from everywhere. There are movie action/thriller stars like Bill Paxton, Ray Liotta, Thomas Jane, and Jeffrey Dean Morgan. There's Brendan Fraser and Christopher McDonald, who I most often associate with comedies, and Jeremy Davies, who I missed seeing as Dickie Bennett on Justified. There's one-time-teen-hearthrob-turned-Agent-Carter-foil Chad Michael Murray. But my favorite of all the cast is Crispin Glover — aka Marty's dad from Back to the Future ("you are my density") — who is kind of choosy about his movies and always picks weird roles, so I can't wait to see what he does.

...Plus One Big Coincidence

Bill Paxton is playing the heroic Sam Houston, who, in one giant coincidence, happens to be an ancestor. "When I was growing up, my dad said Sam Houston's mother was a Paxton and that I was related somehow," Paxton told FOX. "I never really found out precisely how I was related until I was researching the role and I came to find out that Sam Houston and I shared common grandparents going back six generations on my dad's side." If that's not a sign you should take a role, I don't know what is.

That's where the whole Texas Revolution starts. Does anything loom larger in a Texas historian's imagination? No word on whether or not they try to find the basement like Pee-Wee Herman did.