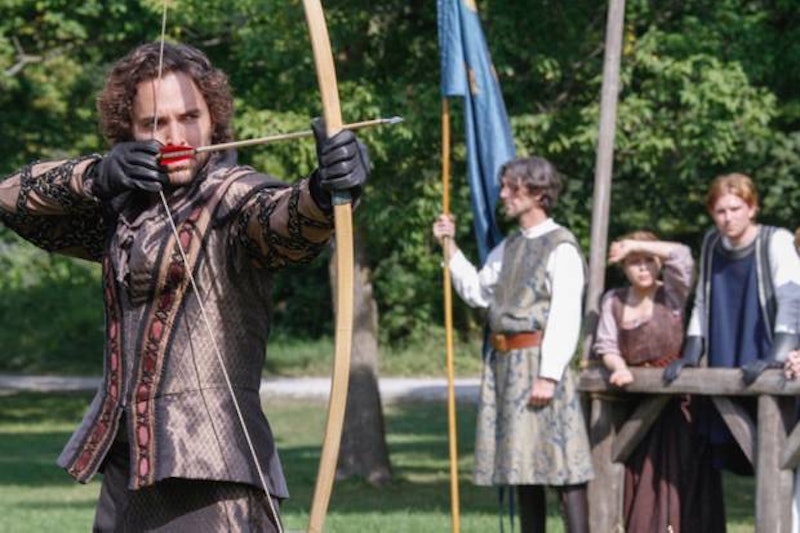 This week's episode of Reign was called "Hearts and Minds," but it should have been called something like, "How Not to Get Out of an Abusive Relationship." Even though Mary does eventually get out of said relationship (or, you know, marriage treaty, since this isn't actually high school), it takes so much scheming and plotting to make it happen. Not that I'm complaining. I love scheming. And I love plotting. And I love how trashtastic Reign is. In the modern day, this episode would have ended with a police report, so I decided to write one up for it.

Charge: Attempted murder, conspiracy to cover up crimes, treason against ally France and major douchery toward all servants and future wife, Mary, Queen of Scots.

Victim: France, Bash, Mary, every servant he comes in contact with, but especially poor Miguel.

Report of Events: Even though Tomas turned his charm lasers to stun last week when he was wooing Mary and offering to send his army to defend her country, that all turned out to be an act. As soon as Mary said yes, and negotiations to change her marriage treaty from France and Francis to Portugal and Tomas, he changed and went into domestic abuse mode. He threatened Mary when he spotted a sweet (albeit vaguely inappropriate, given her new treaty negotiations) moment between her and Francis. He assigned his servant Miguel as her whipping boy, beat him in front of her for her "crimes," and only scowled, all the time. He declared that he owned her and would treat her as such. It was just bad all around.

Bash: "It was totally bad. He was a monster when he stormed into my room and threatened my legitimate brother Francis over their fight for Mary. I was on my death bed, for crying out loud! Oh and we figured out, like, a day later that it was totally his fault I was there, too. Yeah, Francis and I are pretty much super sleuths and we realized that it was really Tomas who had the motivation to leak information to the English about France's plan to help Scotland. He was trying to be declared legitimate so he could rule Portugal and a marriage treaty with a bonafide queen was just the thing he needed to seal the deal. Francis and I are so smart."

Miguel: "He was such a d-bag. He made me help him orchestrate this whole horrible crime, then how does he repay my loyalty? By making me Mary's whipping boy and then taking me into the woods on a 'hunt' and trying to kill me so I couldn't tell any of his dark secrets. He was the worst boss ever and I'm so glad Francis killed him… I mean that he died nobly defending… wait, what was the lie France made up about that again?"

Prostitute: "Yeah, Tomas beat me and paid me off to lie and say Simon, that English ambassador guy, was the spy who got Bash hurt. Obviously, it was really Tomas and Mary stopped me just when I was on my way out of town to get away from this crazy mess. I'll probably end up in prison for lying, but at least the popular kids got their way. It's annoying since they could have just let me go with my money if they were going to kill him anyway. Ow. I mean, if Tomas were going to die nobly in the woods anyway."

Mary: "I'm so glad I don't have to marry that Tomas guy anymore! He was, like, super sweet when he was asking me to go steady forever and give him partial control of my kingdom and stuff, but then it's like, the second I said yes, he just changed. He got super scary and started hitting that commoner whose name I can't remember and of course I was not looking forward to having that as a husband. I mean, can you say 'selfish lover'? But I'm a queen and that makes me really important and selfless, so I was definitely prepared to marry him for the good of my country and all. Thankfully, Francis has succumb to my charms and he and Bash totally saved the day. Ugh, I'm getting so tired of this nonsense. If I had a penis, I'd run this town. I'm clearly a stronger leader than Francis. Whatever, at least I used the opportunity to speak about my revamped marriage treaty with France at court to announce that I'll be handling my own negotiations from now on. I love my uncle, but really, I'm so smart and awesome, I just want my own say. #feminism #girlpower #youregonnahearmeROAR "

What did you think of this week's Reign?