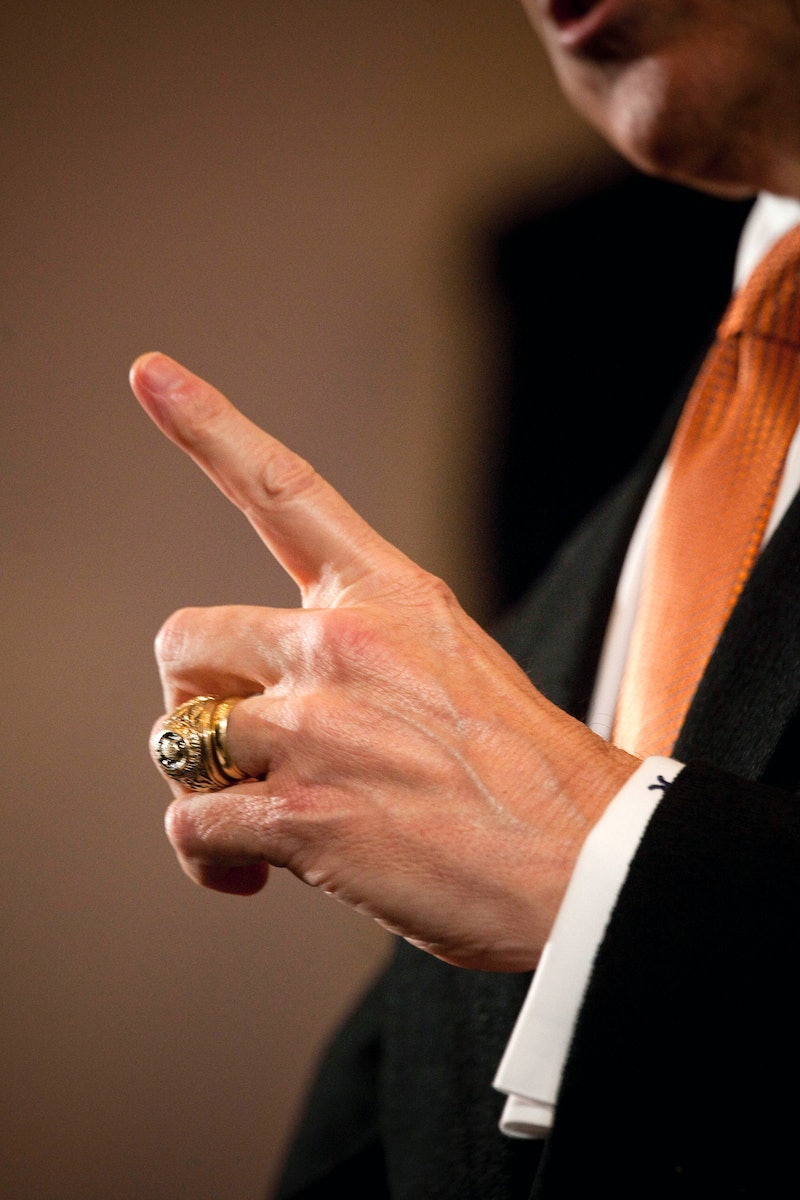 Why are we often so eager to blame other people for things? Well, according to an animated short of a talk by Dr. Brené Brown, there's actually a sensible psychological reason why we like to blame others when things go wrong — even when our actual targets of blame make no sense at all. It's also a pretty good argument for why we should stop blaming others, so let's all take notes on this one.

According to Brown, blaming other people — or even blaming ourselves — essentially gives us a sense of control. Bad things don't happen to us because of the unpredictable random happenstance of the universe or the unknowable decisions of God Almighty or the whims of a capricious warlock flinging curses about the world will-nilly. No, if we can blame someone — anyone — it means that bad things happen because someone caused them to happen. And that's a much less scary possibility to deal with than the alternative.

The problem, as Brown points out, is that blaming other people gets in the way of relationships, as well as in the way of holding people truly accountable for things that really are their fault. Telling someone that they screwed up and this horrible thing is totally their fault is a lot easier than sitting down and really talking about what happened and why you're upset. The second way is still way more productive, though, so... just bear that in mind the next time you feel like flying off the handle at someone.

Personally, I already know that I'm guilty of blaming people for things that are not actually their fault. Most of the time I'm self-aware enough to realize that's what's going on and to not be too serious about it, but my mind still makes those associations none-the-less. Here are just a few things I have blamed on totally innocent people; scroll down to watch the full video.

There was one time, while stranded at the airport due to a massive snowstorm, that I called my sister and began the conversation with "This is all your fault!" My logic was that her plane had managed to take off and mine hadn't, so therefore...

...Actually that was as far as the logic went, but I was very insistent that she was to blame.

I once spent a decent chunk of a car ride through stop-and-go traffic one afternoon arguing with one of my fellow passengers that the traffic jam was all their fault because they'd said there wouldn't be any traffic. They maintained that the traffic was caused by the car accident up ahead blocking three lanes, while I knew for a fact that it was because they went and taunted the universe.

As a kid, I had a great singing voice... until my mother made one innocent, offhand comment that for some reason made me super self-conscious about my singing for years. Later in life, my mother also came to all of my choir concerts and encouraged me and even paid for me to have some voice lessons when I asked, but I of course still blame her for stunting my artistic growth and ensuring I will never be Taylor Swift.

I once got a seriously bad grade on a paper, took one look at it, and thought to myself, "Stupid Benedict Cumberbatch, this is all his fault!" And why, you ask, was I blaming a movie star for my grades? Because my roommate was in love with him at the time and had insisted that I watch Sherlock with her and so then I got hooked on Sherlock and stayed up half the night watching the first season instead of writing my essay. So you see? All his fault.

Anyway, for some advice about how to be healthier about blame, you can check out this video, which is great.

More like this
The Best Time To Date After A Breakup, According To Experts
By Bustle Editors
20 Things You Should Never Tolerate In A Relationship
By Rachel Sanoff and Kathleen Ferraro
12 Ways You're Sabotaging Your Love Life
By Teresa Newsome and Lexi Inks
How To Use Instagram Story Highlights So Everyone Sees Your Fave Stories
By Brandi Neal and Emma Carey
Get Even More From Bustle — Sign Up For The Newsletter