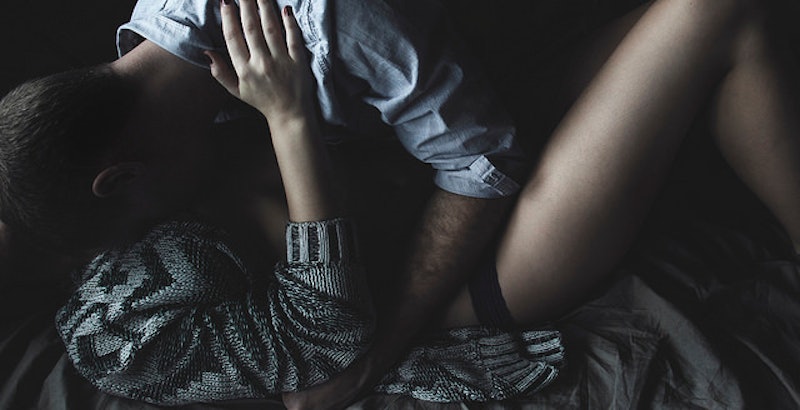 Men like sex. Women like sex. And with experience, sex only gets better. It’s kind of like wine in that sense (if you equate age with experience, that is), but you can’t technically have sex with wine – well, I guess you could, but then you run the risk of broken glass and, well, I feel like I don’t have to complete this sentence for graphic purposes. However, regardless of your fondness for the juice, I assure you that a grown-ass man’s sexual effort could beat even the girthiest of wine bottles for many reasons.

You see, a grown-ass man uses his past sexual experiences (those from his awkward teen years to his slightly less awkward college years and beyond) to learn from and improve his game between those same sheets that he probably refused to wash during those hygienically questionable years in his dorm. He understands that, like men, everybody is turned on by different things, but also has the ability to read a woman’s body to understand what he’s doing right, and how he can further improve. He knows how to communicate in and outside of the bedroom, so sexually speaking, he rarely does things wrong. If you’re hoping to find yourself such a man, here are 10 ways to identify him during your sexual encounters.

A grown-ass man understands that if you’re going down on him, it’s his duty to go down on you. Because sex isn’t charity. Despite the fact that you’ll never know whether a guy enjoys doing the deed or not (seriously: some guys just hate doing it while other feel the opposite; a man rarely resides in the middle), a grown-ass man would never turn down a request made by the woman he’s interested in. A grown-ass man should also know what he’s doing down there— if he doesn’t, he’s just generous and is not quite the grown-ass man you want him to be. But, obviously, with a willingness to learn, and with teachings from yourself, he can be.

When feelings are involved, no sex is better than passionate sex — though I do enjoy the odd bout of angry sex for different reasons. Passionate sex is easy to detect; it looks similar to those dimly-lit sex scenes in your favorite romance movies, except not quite because nothing is like the movies and our bodies aren’t strategically positioned for optimal lighting purposes. Kissing is paramount to building intimacy, and a grown-ass man knows to never kiss his lady after he’s gone down on her – unless she’s into that kind of thing.

3. But Also Knows When To Get Dirty

Just because you two have feelings for one another doesn’t mean he’s going to opt for tender sex each time you go at it, because, like him, sometimes you just want rough, dirty sex – usually after a night of drinking. He might not have read Fifty Shades, but can certainly trigger Mr. Grey’s charm through spanking, dirty talk, and, if you’re into it, a hidden library of vibrating toys. (I’ll admit that last one probably won’t happen, but that’s not to say it can’t!)

4. He Reads Your Body

Whether you clearly communicate what you like and don’t during intercourse (which is certainly beneficial for a first-time partner), a grown-ass man will know – or at least have an inkling – regardless. He just will. As I stated earlier, he’s used his previous sexual experiences to learn these things, and with this talent, wants nothing more than for you to enjoy yourself. Some guys will need a little more communication than others, but as long as he’s considering your enjoyment in this passionate act, he can’t be all bad, right?

5. He Cares About Your Orgasm

To a grown-ass man, sex isn’t over until your orgasm announces itself like the obnoxious friend who pre-drank a little too much and shows up at your place. Your orgasm communicates to him that his job as a – considerate – man is done, and he can now climax himself. A man who doesn’t consider his partner's orgasm is still a selfish young lad, or still doesn’t know what your special little turn-ons are yet.

A grown-ass man understands the importance of the post-coital cuddle. He lets you choose the cuddle position, where the two of you will then either have a chat, go immediately to bed, or stream something online (or more likely, on Netflix) to watch together.

7. He Doesn’t Usher You Out Of His Door

After you have sex, a grown-ass man won’t morph into Mr. Hyde and hand you less than half of the cab fare required to make it home. Instead, he will cuddle (see above) and make you feel special, not like some random chick he banged and will brag about to his friends. If he does, take the aforementioned cab.

You know where I’m going with this one. Whether he politely asks where he can shoot or chooses the area he knows you’re most OK with, a grown-ass man will always have a towel or tissue on hand to clean up whatever mess he has left on your body.

9. He Doesn’t Talk About How Great He Was

A guy who talks about how great he was in bed is a child (I’m not talking literally here, what you did was still legal). He feeds his ego by telling you how you reacted when he did this and that, and ultimately makes you feel incredibly awkward to where you want to usher him out the door – even if it’s his own place.

Unless the two of you are in a trusting, long-term relationship and have agreed to stop using condoms, a grown-ass man will always use protection. If condoms aren’t in the nightstand, he’ll either go out and grab some, or opt for something that won't get you pregnant. Of course, if you’re trying to get pregnant or are using other preventative means, a condom won’t be necessary.

More like this
12 Aphrodisiac Desserts To Spice Up Your Valentine’s Day
By Kaitlyn Wylde
12 Active Date Ideas That'll Get You & Your Boo Outside
By Lexi Inks
30 Sweet Valentine's Day Caption Ideas For Long-Distance Relationships
By Syeda Khaula Saad and Carolyn Steber
18 Hinge Prompt Answers To Try If You’re Looking For Something Casual
By Lexi Inks
Get Even More From Bustle — Sign Up For The Newsletter
From hair trends to relationship advice, our daily newsletter has everything you need to sound like a person who’s on TikTok, even if you aren’t.