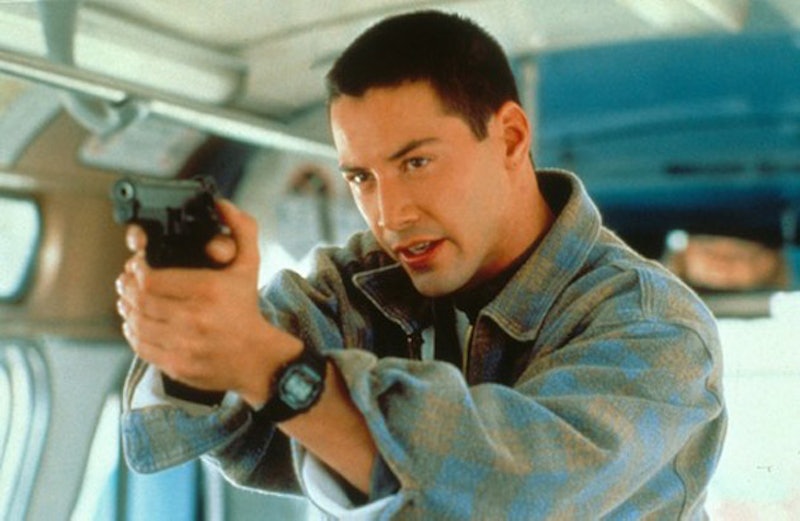 I have a deep, abiding love for Speed, the 1994 action classic that paired three of my favorite things: Keanu Reeves, Sandra Bullock, and high-speed bus chases. Given the movie’s schlocky premise—This bus will BLOW UP if it goes below 50 mph!!—it works much better than it really has any right to, due in large part to fun performances Reeves and Bullock and the script’s snappy dialogue. So imagine my surprise when I discovered today that Joss Whedon wrote Speed. Why isn’t this better known? Given Whedon’s talent for creating smart action shows and films that share marked sense of humor, Speed’s success suddenly makes perfect sense.

In an interview with the Huffington Post, the Avengers director explains why he didn’t get a writing credit for the film, even though the script’s original writer, Graham Yost, has been open about the fact that Whedon contributed significantly to the dialogue. Whedon says,

I did not get a credit on [Speed]. The studio gave me one, but then the Writers Guild of America took it away, and I was pretty devastated. … It has to do with WGA bylaws. You can come in and rewrite all of the dialogue, and still not get credit. They didn't think I made big enough changes to the plot. I actually did a lot of overhaul, but much of it was to a later draft, so it went back to what Graham originally had.

One of Whedon's major contributions to previous drafts of the Speed script was to make the dialogue and characterization more realistic. He had a major role, for example, in reconceptualizing Keanu Reeves’ role as Jack Traven. According to Whedon, the original version of the character was a “cop on the edge, who plays by his own rules” type (I’m imagining Mel Gibson in 1987’s Lethal Weapon here). Whedon instead imagined Jack as a good cop actually trying to do his job and save everyone. He tells Huffington Post,

You know, even on the bus, his energy is very kind and giving, and supports the choices he’s trying to make. So, I think that was a huge scene change, getting him from being a rootin’-tootin’ maverick, to being a guy who has a problem he must solve.

Whedon also discusses Speed within the context of other action movies of the 1980s and early ‘90s, particularly in regard to 1988’s Die Hard (which we all know is one of the best movies ever). He suggests that Speed was part of a broader turn toward a more thoughtful warrior figure, saying,

You know, “Die Hard” is one of those movies that’s not only seminal, but also the best version of itself. Sometimes, directors put work out and wait for someone to do a good version of it, but “Die Hard” really was the best “Die Hard.” Although, I don’t think of “Speed” as a “Die Hard,” I do think it falls into the spectrum of updating the action movie so that the people in it aren’t immortal, gigantic, Schwarzenegger, Dirty Harry, above-the-law kind of titans. … I feel like “Speed” was part of our way out of that, into an action movie that understands that everybody matters. … I look to the progression to films like "The Matrix," and I think there's the idea of the peaceful warrior germinating in ["Speed"], and I think that's important.