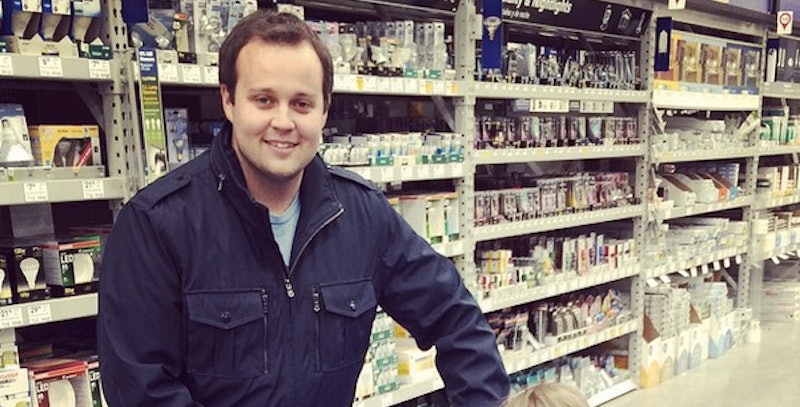 On Thursday, InTouch published a report from the Springdale, Ark. Police Department that brought past sexual abuse accusations against 19 Kids and Counting star Josh Duggar to the public's attention. The next natural question is: will the eldest son of the conservative Christian family face consequences for his actions? Can he be arrested? Could Josh Duggar go to jail?

The now 27-year-old married father of three, whose wife, Anna, is pregnant with their fourth child, has been accused in the 2006 police report of fondling the breasts and genitalia of several female minors — some of whom were allegedly sleeping at the time of the abuse — when he was also a minor. As the publication reports, the first alleged incident of abuse in the police report took place in 2002. Josh responded to the accusations by issuing a statement to People magazine on Thursday in which he said, "Twelve years ago, as a young teenager, I acted inexcusably for which I am extremely sorry and deeply regret."

InTouch reports that when one of the female minors told Josh's father, Jim Bob Duggar, about one of the incidents in 2002, the patriarch of the family didn't go straight to the police. Jim Bob reportedly opted instead to send his son, who had allegedly confessed to his father that the girl's claim was true, to a "Christian program" that consisted of counseling and physical work. Reportedly, the police became involved in 2003 once Josh returned from the program, and the case was handled by an Arkansas State Trooper named Jim Hutchens, an alleged family friend who InTouch says didn't take any legal action. Hutchens was later convicted for child pornography and is serving a 56-year prison sentence, according to the Daily Mail.

As for what type of consequences Josh could face now that the allegations are public, Hollywoodlife.com spoke with criminal defense attorneys in the Duggars' Arkansas hometown, who explained that Josh may never face legal consequences. Criminal Defense Attorney Jason Files told the website,

It is likely that the statute of limitations have expired for any offenses that might have been committed. The allegations against Josh would most likely have been prosecuted as sexual assault in the second degree (A.C.A. section 5-14-125), defined as sexual conduct with a person less than fourteen years old by a person who is under the age of eighteen. This is a class B felony. The statute of limitations for a class B felony is three years. The statute of limitations is extended if the offense is committed against a minor. In that case, the three years does not begin until the victim turns eighteen. However, this exception only applies if the offense was not previously reported to a law enforcement agency. From what we know, these alleged offenses occurred thirteen years ago and were reported at least twelve years ago.

Lawyers also told the website that, even if all of Josh's victims who originally reported the abuse in 2006 came forward today, it would have no effect because of the statute of limitations. The only possible exception would be if a new victim — one who hadn't previously reported a crime — came forward. As Files explained, "If there were other cases involving minors that were not reported previously, they could potentially fall into the exception to the statute of limitations."

If you're wondering whether Jim Bob can be held accountable for, according to InTouch, not immediately reporting the abuse, Files said, "Nothing in that facts as reported would indicate that Josh's father was a mandatory reporter, meaning that he was under no legal obligation to report a suspected crime."

Members of the clergy, whom InTouch reports Jim Bob consulted, are also excused from having to report to police. And, as Hollywoodlife.com's interviews explain, Josh is not considered a sex offender, nor will his name be added to the sex offender registry, because he wasn't convicted of sex crimes as an adult.

According to TMZ, a judge made the decision on Thursday to destroy molestation investigation documents after one of Josh's alleged victims came forward and asked a judge to protect her identity. TMZ claims the report contains the names of all of the victims, as well as the details of the sexual assaults.

Even though legal action against Josh is unlikely, his life has drastically changed in just a few days. He resigned his position as a lobbyist for the Family Research Council. The FRC posted the following statement on its website:

Today Josh Duggar made the decision to resign his position as a result of previously unknown information become public concerning events that occurred during his teenage years. Josh believes that the situation will make it difficult for him to be effective in his current work. We believe this is the best decision for Josh and his family at this time. We will be praying for everyone involved.

TLC tells Bustle they have "no comment" in regard to the allegations surrounding Josh Duggar, what the fate of the show is, and whether or not Josh will continue on 19 Kids and Counting.