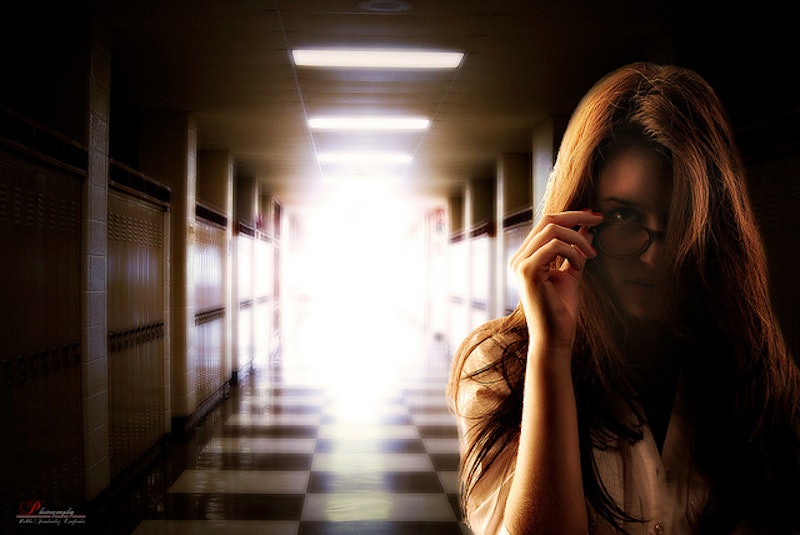 Thanks in part to the wonder of the Internet, I'd thought we'd come close to seeing all the dress code debacles that could possibly rear their patriarchal little heads. I stand corrected. This is a wild one. An Indianapolis school is mandating that their 6th grade girls wear a "non-white t-shirt" (of course) over their swimsuits should they want to attend their end-of-school-year pool party. Let's pretend for a moment that the difference in attire-related expectations between genders isn't concern enough and focus on the fact that these pre-teen girls are being forced to disguise their femininity as a whole, and in a somewhat humiliating fashion. What the school, Rhoades Elementary, is communicating to these young women is that their growing bodies are objects to be hidden, effectively demonizing them for the way that others may or may not sexualize them. As referenced above, occurrences such as this one have been rampant this year, shedding light on the fact that commonplace sexist adult mentalities are indoctrinating our young people to accept these pernicious instances of body shaming as a matter of course. Given that the average 6th grader ranges in age from 11 to 13, this is especially concerning. Here's the letter that reminded us all that white t-shirts are the devil.

The announcement was brought to media attention by the mother of a male member of the class named Jennifer Smith. Smith immediately saw the terms as encouraging girls to be "ashamed of their bodies." What's more is that the party's mission was to provide a fun outlet for students who had demonstrated "good citizenship," meaning that not all children were invited. Only the ones without white t-shirts in their closets, one would assume?

When Smith reached out to the school, admin responded in typical fashion by explaining the methods to their madness threefold. First citing economic fairness, in that not all students can afford to buy a one-piece swimsuit (as if there weren't other options), second that the school had a history of "inappropriate swimwear" being worn (subject to the existing and highly wanting dress code of which we've gotten a preview today), and third that students who are uncomfortable showing their bodies would be more comfortable if others were equally as covered (females only, of course).

While the school may have had good intentions, it is the ultimate sexist's defense trifecta and we've seen (and debunked) it all before. There's no excuse for imposing heavy rules of dress on the shoulders of young women. Let's hope we begin to see less and less of these occurrences, and more of the non-discriminatory body positivity we so vastly need.

No matter what the color of the t-shirt.