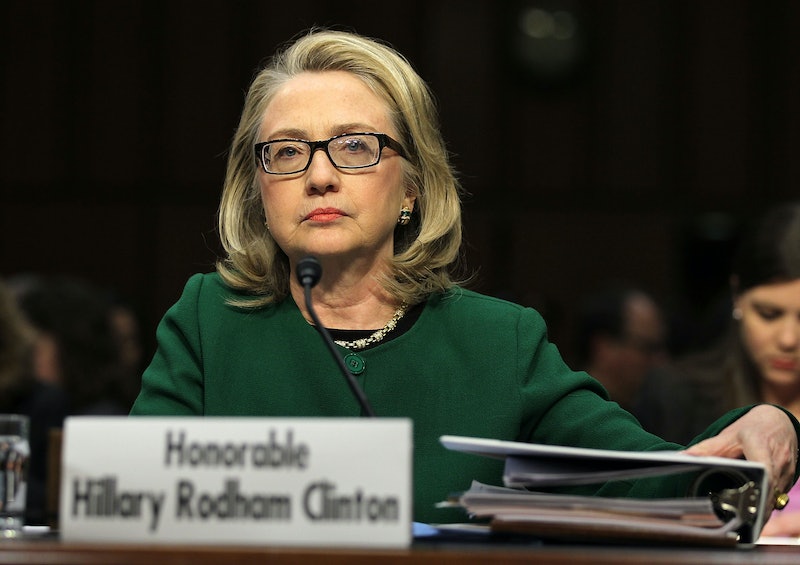 On Friday, the U.S. State Department released the first 300 emails from Hillary Clinton’s private server, allowing the public to dig deep into about 850 pages of archives of the 2016 candidate's tenure as secretary of state. Although the remaining 29,000-plus pages of communications have not yet been released, this initial round of emails has already given outsiders a glimpse at the tenuous workings of the State Department during a series of unfortunate incidents that triggered a media firestorm around the secretary and her staff in 2012. In one such email, Ambassador Melanne Verveer wrote to Clinton, reassuring her of her widespread positive influence and citing support for Clinton from the international community following the devastating attacks in Benghazi.

In an email dated September 18 of that year, following the tragic incursion on the U.S. consulate, Verveer, then the ambassador-at-large for global women’s issues, indicated that in her meetings with several foreign ambassadors and envoys at a NATO summit on women and peace that week, she had been astounded by the clear backing of U.S. security models and implementations.

“The new special rep — a seasoned diplomat who knows her way around NATO — wanted me to tell you how much you have inspired her,” wrote Verveer, adding, “[that’s] something I hear everywhere!”

Others pointed to Clinton’s own national action plans as the inspiration for those being implemented in their home countries, reported Verveer. Of the summit, she wrote:

My DOD colleague and I discussed [in front of the audience of foreign attachés] U.S. efforts both generally and in Afghanistan. We were followed by extensive remarks from the NATO ambassadors, all of whom touched on the importance of women's role in security and NATO's mission, as well as applauded US leadership. Many mentioned you in their interventions!

Verveer also added that U.S. representatives were working hard on “getting the engagement of Burmese women into the formal peace structures being put in place to end the ethnic conflicts” and that European Union member Vivian Redding had expressed “admiration” of Clinton’s leadership and work for the global community.

Verveer’s report starkly contrasted with the tense atmosphere in U.S. politics around that time: Allegations of misconduct and mishandling from many on the right painted Clinton in a vastly different light. In her 2015 autobiography, Hard Choices, Clinton dedicated an entire 34-page chapter to the debacle, recalling accusations that the State Department had handled the Benghazi attacks with kid-gloves to avoid a disturbance on the eve President Obama’s reelection bid.

Every step of the way, whenever something new was learned, it was quickly shared with Congress and the American people. There is a difference between getting something wrong, and committing wrong. A big difference that some have blurred to the point of casting those who made a mistake as intentionally deceitful.

In her newly released communiqués with the Secretary, Verveer reminded Clinton that Ambassador Chris Stevens, who had been killed in the consulate attacks, had shared her goals of furthering women’s roles on the global security stage. Verveer called his death an “awful loss.”

“In addition to everything that's been said about Chris Stevens, he really understood the important role the women in Libya were playing in peace and security,” she wrote in her email to Clinton. “Whenever I met with Libyan women at meetings in the region, they went out of their way to tell me how much he supported them and how much affection they had for him.”

In contrast, as Verveer lamented the loss of the State Department ambassador, outside critics weighed both Stevens’ and Clinton’s culpability in the devastating attacks against one another.

Whistleblower Gregory Hicks, the former Deputy Chief of Mission at the U.S. Embassy in Tripoli who testified in front of Congress and largely blamed Washington for the supposedly delayed response, maintained long after the fact that the ambassador had not been responsible for the gruesome pitfalls, but rather that the tragedy at the consulate had been the fault of Clinton and the entire Obama administration.

“Chris Stevens was not responsible for the reduction in security personnel,” wrote Hicks in an op-ed for The Wall Street Journal in January 2014, repeating his earlier allegations that Clinton and the rest of the State Department had “punished” him for speaking out. “His requests for additional security were denied or ignored.”

Despite vehement opposition to what Hicks and a scathing Senate intelligence report had concluded was a "preventable" tragedy, Verveer's email might have at least provided Clinton with a brief respite in the knowledge that her international diplomacy had not gone unnoticed.

"You've been magnificent throughout all this," wrote Verveer, "despite how wrenching it's been."

More like this
Why Eurovision 2023's Host City Won’t Be Revealed For A While Yet
By Sam Ramsden and Rachel Mantock
13 Photos Of Princess Charlotte Loving The Commonwealth Games
By Sam Rogers
Naomi Osaka & Emma Raducanu’s Experiences Have Inspired A New Amazon Show
By El Hunt
We’ve All Had Bad Sex. Nona Willis Aronowitz Is Talking About It.
By Sophia Benoit
Get Even More From Bustle — Sign Up For The Newsletter