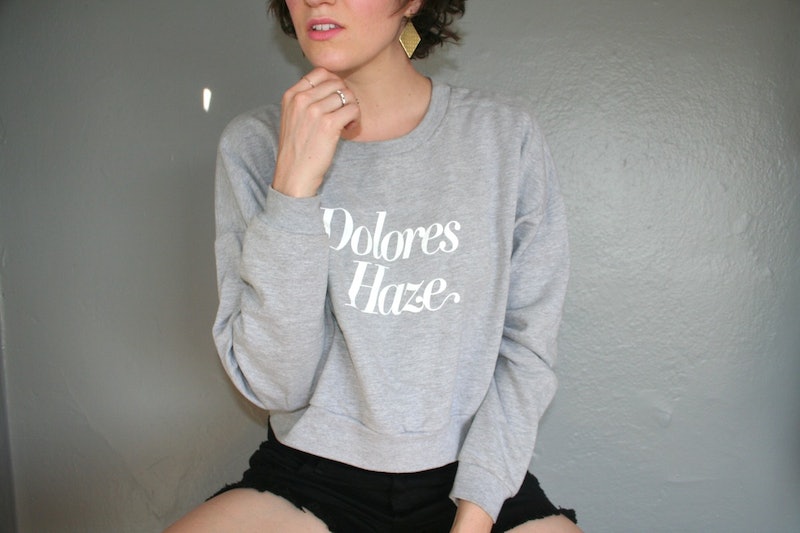 "Being pretentious" is often seen as a terrible thing, but I'm here to ask you, comrades: WHY??? Being pretentious is awesome! How else are you supposed to subtly imply that you've read more books than all your coworkers, huh? How else are you supposed to float around in a bubble of self-imposed superiority that no one but your closest friends will dare to breach? If we weren't able to hide our insecurities behind pompous eye rolls, elitist sighs, and highbrow coffee culture, HOW WOULD WE GET UP IN THE MORNING?

If you've ever wanted to alienate people by wearing obscure pieces of clothing that others just "don't get," here are a few ideas for you. As an homage to every phony intellectual who's come before me, I've compiled some of my favorite pieces of literary, esoteric, or unnecessarily grandiose articles of clothing, and photographed them on MYSELF — because nothing says pretentious like a good old-fashioned self-portrait or ten.

Intrigued? Absorbed? Captivated? Fascinated? Tired of my use of Thesaurus.com? Here's how to be the most annoying person at the lit mag launch party.

1. Wear a sweatshirt that tells the world you're too good for higher education

What's cooler than having a degree? Purposefully not having a degree because you believe you're way, way, way too cool for school! While wearing this in-your-face sweatshirt, make sure you make a lot of comments about how "the system is broken." If someone asks why, sniff, "Don't you ever read think pieces on the Internet?"

2. Comment on the self-referential nature of art with a simple white t-shirt

What happens when you emblazon modern slang onto a canonized piece of art? YOU GET A CONVERSATION PIECE ABOUT REPRESENTATIONS OF THE SELF, THAT'S WHAT. Use this hip tee to chat up anyone who strikes your fancy by saying something casual and off-the-cuff like, "Are selfies simply 21st-century self-portraits, or are they fundamentally different?"

3. Pin everything you think about literature onto a simple denim jacket

If your outerwear isn't conveying your thoughts on plot structure and stylistic narrative devices, you're wearing outerwear wrong. PS: What's better for your intellectual cred than dating a poet? Wearing a pin implying that you've dated TOO MANY poets.

4. Weird everyone out with a big German word emblazoned on your t-shirt

Doppelgänger, $28, Out of Print

This t-shirt implies that you might just have a double walking around out there, which is a terrifying thought when you're as pretentious as we are — right, guys?! When friends greet you, make subtle changes in your expression so that they're never sure if they're talking to you or your evil, evil twin.

5. Wear a sweatshirt that references the obscure real name of a very famous literary character

This sweatshirt is the ultimate in in-your-face literary obscurity. "Dolores Haze" is the given name of one of the most famous girls in literature, and yet I've worn this sweatshirt around numerous writers and no one can ever quite remember who she is. Can you guess without Googling it? Hint: "The tip of the tongue taking a trip of three steps down the palate to tap, at three, on the teeth...."

6. Pin a portrait of the artist to your lapel

Only the truly in-the-know will realize that this oversized, handmade pin that says "World's Best Recluse" is referencing Emily Dickinson, the weirdest of them all.

7. Own the word "pretentious" by wearing it on your wrist

Has anyone ever accused you of being "too artsy"? Of caring "too much" about your writing? Embrace — nay, embody — those insults with bracelets like these. "Pretentious" tells the world you just don't have time to listen to their side of the story (always a charming party trick!), while "ink-slinger" says that you spend way too much time online Googling "cool old names for writers."

8. Wear a shirt that describes the book you're reading — but, like, in an enigmatic way

A "bildungsroman" is a novel about the moral and psychological growth of the main character — DUHHHHHHHH — and so is The Brief Wondrous Life of Oscar Wao. If no one at the coffee shop notices how clever you're being, lightly tap them on the head with your novel while yelling, "NOTICE HOW SMART I AM!"

9. Pin something tiny and obscure to your Converse

Ugh of the Ancient Mariner" pin from Beanforest, $2, Etsy

LOL! The Ancient Mariner is totally bummed out here! Look, he's saying "Ugh!" Why isn't anyone else laughing with me?! Listen, if you manage to find someone nice enough to bend down and read the pin on your shoe and then allow you to hyperactively explain why it's so funny, you've probably found your soulmate.

10. Name everything, even your nail polish, after quotes from your favorite books

Want to really take this obscure-reference thing to the next level? Customize your manicure by selecting the shade and naming it yourself. I named mine after literary insults — "False face, false heart" is a Macbeth reference; "Lovely Corpse" is Dickens; "Headstrong Girl" is from Pride and Prejudice; "Poor & Obscure" is, of course, from Jane Eyre. HEY! IT'S NOT OBSESSIVE IF IT'S DONE IN A GLOSSY, CHIP-FREE FINISH.

More like this
Taylor Swift’s Glitzy Grammys Look Is Giving Midnights
By Alyssa Lapid
Twitter Memed Doja Cat's Red Schiaparelli Look & I Am Cackling
By Dominique Norman and Kelsey Stiegman
Hailey Bieber's Latest Look Is Giving Serious Margot Tenenbaum Vibes
By Allie Fasanella
Kylie Jenner Joins The Bondage Trend In At Paris Fashion Week
By El Hunt
Get Even More From Bustle — Sign Up For The Newsletter
From hair trends to relationship advice, our daily newsletter has everything you need to sound like a person who’s on TikTok, even if you aren’t.