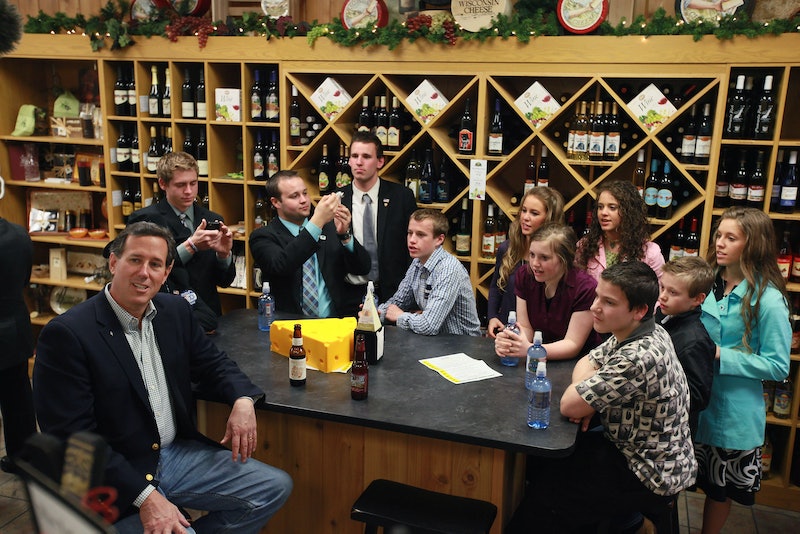 The #RapeCultureIsWhen hashtag has been around for a while, but it has received renewed attention in recent days in light of the widespread allegations that Josh Duggar, eldest child of 19 Kids and Counting fame, molested 5 young girls when he was a teenager. The reality star has since responded to the accusations, stating that he "acted inexcusably." Though at least two of his victims are said to be his own sisters, reports claim that his parents waited more than a year to file a report with law enforcement (opting, instead, to discuss the matter with church elders).

Since InTouch filed its initial report on Thursday, media and social media has been ablaze in two distinct and deeply problematic camps: those filled with schadenfreude, reveling in the disgrace of the Evangelical family who has been depicted as wholesome, pure, and saccharine for about a decade, and those defending Josh's actions as youthful indiscretion. Both of these groups forget the most important factor in this story: Josh Duggar's victims.

Just to be transparent about my personal bias in this story (honestly, how is it possible not to have one when dealing with an issue like this?), to say I've never been a fan of the Duggars is to put it mildly. Their politics are terrifying and discriminatory and their adherence to the Quiverfull movement, pedaled as cute and charming by TLC and their supporters is for all intents and purposes a cult built on the backs of oppressed women. But that certainly doesn't mean I'm celebrating their rapid fall from public favor; If the only way to get the public to fall out of love with them was for allegations like this to be true, I would wish them to remain on the air indefinitely. My heart breaks for what his victims went through, and what they must be going through now that their past trauma has resurfaced in an incredibly public way.

Yet amid all the bipartisan obliviousness, there are a few glimmering beacons of reason. People whose concern is for the victims and for the larger picture this incident and its coverage paints in the world at large. It's simultaneously hard and heartening to see some of these issues highlighted on Twitter.

We need to do better.