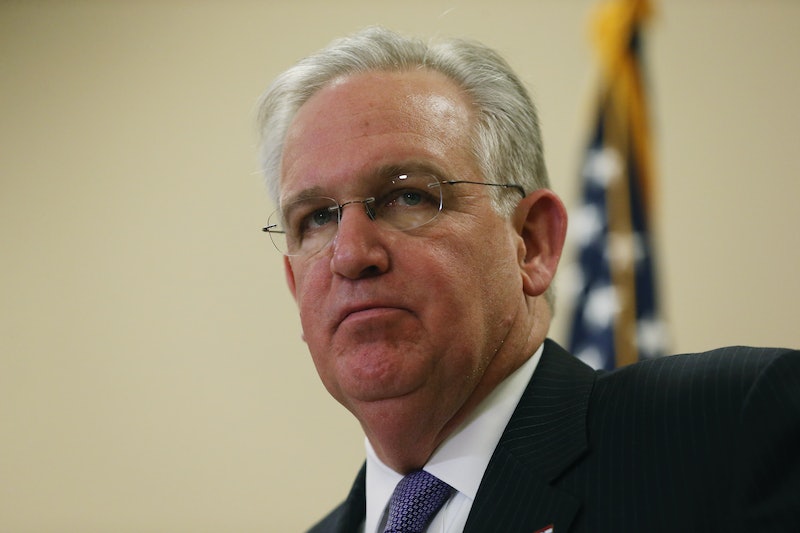 On Friday, Missouri Governor Jay Nixon decided to exercise some mercy, freeing a man from prison in the midst of a life sentence. Nixon commuted 61-year-old Jeff Mizanskey's marijuana life sentence, meaning he'll have the chance for parole, potentially bringing his decades-long prison stint to an end.

It's quite possible that you haven't heard of Mizanskey's case specifically, even though it's drawn an increased amount of attention over the last several months — it's gotten some coverage, and a Change.org effort launched by Mizanskey's son Chris garnered close to 400,000 signatures. The details, however, are quite shocking, although Mizanskey's hardly the first person to run into a draconian drug-related sentencing.

In 1993, he was caught in a sting operation that earned him his so-called "third strike." He'd already been convicted of two prior marijuana-related offenses occurring in 1984 and 1991, which under Missouri's system triggered a life sentence without any opportunity for parole, even though his offenses were entirely non-violent. Nixon's commutation doesn't mean Mizanskey will just be released from prison outright, to be clear — it just means that he'll be eligible for a parole hearing. A hearing which, in view of his 21 years already served, he could probably pretty feel confident about.

Nixon announced the commutation on Friday, as detailed by Huffington Post.

The executive power to grant clemency is one I take with a great deal of consideration and seriousness. In the case of the commutation, my action provides Jeff Mizanskey with the opportunity to demonstrate that he deserves parole.

Nixon's decision comes in the context of a much wider cultural acceptance of marijuana use — certainly moreso than the mid-'80s to early '90s era in which Mizanskey was charged and prosecuted. As of 2015, four U.S. states have voter-approved, fully legal marijuana (although it is still a federally banned substance), and a majority of Americans now support legalization.

This is wildly different than the prevailing climate in 1993, at the time of Mizanskey's third offense — public opinion against marijuana legalization was polling at over 60 percent all the way until 2006, according to Gallup. Basically, even though a conservative, southern state like Missouri might not be due for legalization just yet, the number of people who're likely to see Mizanskey's sentence as an inhumane act has been steadily increasing through the decades.

It's not as though Nixon did this unprompted, however — according to St. Louis' KTVI Fox 2, Mizanskey's cause was taken up by over 100 Missouri lawmakers who wrote to Nixon requesting clemency. The effort was led by Representative Shamed Dogan, who was happy with the news.

I am just glad the governor did the right things. Drug addicts, drug users need rehabilitation before they need incarceration.