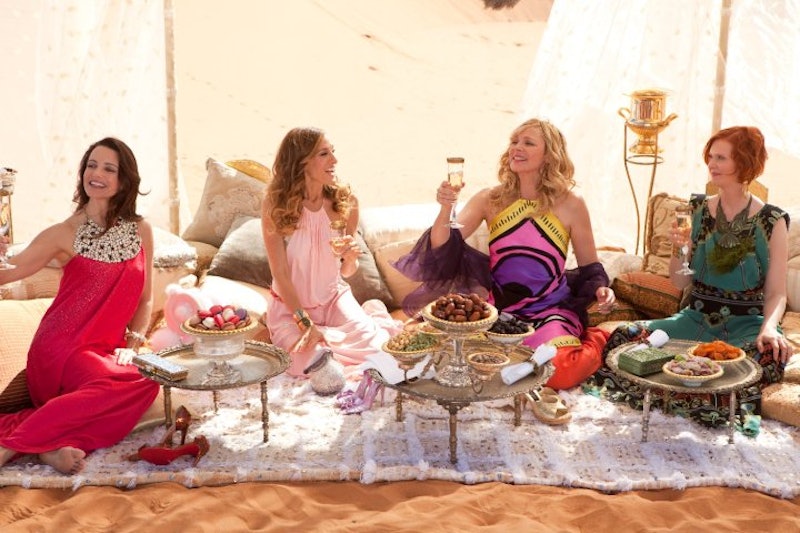 Back in 2010, I was living in New York City and I had the good fortune to attend the Sex and The City 2 premiere at Radio City Music Hall with my best friend at the time. Neither of us were huge Sex and The City fans, but we thought it would be a hoot to see the movie in the same room as the stars. And it was, except it got a little awkward... thanks to some rather offensive moments in Sex and The City 2 . In fact, it was difficult not to cringe during the sequel to the first movie and the HBO comedy series. So, since the 2010 film is celebrating its fifth anniversary, I figured I'd give this movie a re-watch. Would I cringe again? Unfortunately, you bet.

First, let's back up and rehash the plot of the sequel: Sex and The City 2 follows Carrie Bradshaw and friends Charlotte York-Goldenblatt and Miranda Hobbes through married life, as well as Samantha Jones through trying to not get menopause. Life has gotten a little stale in many ways for the one-time single gals about town — Charlotte thinks her hubby wants to bone their nanny and Carrie is disappointed that Big no longer buys her fancy jewelry. So when Samantha gets an all-expenses paid trip for her and her friends to enjoy Abu Dhabi, the ladies hop on the next flight for an adventure that is contrived and, at times, tasteless — not just when it comes to the Middle East, but to women as well.

Here are the top nine offenses that Sex and The City 2 is guilty of in New York and Abu Dhabi.

1. All The Judgment At Stanford & Anthony's Wedding

I understand that gay marriage is still a relatively new right in this country and was especially new in 2010 when this movie premiered. But oh my God, the phrase "gay wedding" is used about 10 times in one scene, and then there are so many jabs at how "gay" the wedding is — it's over-the-top and all white, and comes complete with swans, a chorus, and Liza Minnelli (seriously). Samantha asks at one point, "Can this wedding get any gayer?" We. Get. It. Just let the guys have their awesome wedding! Why do we have to keep pointing out how "gay" it is? Sure it's all played for laughs, but this was handled much better by the Saturday Night Live parody, "Xanax For Gay Summer Weddings."

Even Anthony says the wedding is over the top, but says he's letting Stanford have the wedding of his dreams, so Anthony will be able to cheat. "Because you're gay?" Samantha asks. "No, because I'm Italian," Anthony responds, in jest (I think). He leaves and the gang is left to process what it means to cheat during marriage. I don't even know.

Look, I don't blame Charlotte for being a little threatened by her kids' nanny Erin (played by Alice Eve), who clearly has a bond with her kids and hubby. But the movie plays Erin's bra-lessness for laughs by constantly pushing the one-beat joke with the constant slo-mo close-ups on her boobs and Irish music playing in the background, making this character offensive to both women and Irish people. She has big boobs, and she's Irish, and that's all the movie wants us to know, sadly. And did we really need the Irish music? Because Alice Eve's terrible accent was enough. (She's actually British.)

Carrie, Samantha, Charlotte, and Miranda visit Abu Dhabi thinking it'll be all magic carpets (this is referenced several times) and decadence, a category their hotel certainly falls into — it's totally gorgeous. At the hotel, the ladies observe the women dressed in hijabs and Miranda (who is the trip's Abu Dhabi Wikipedia) warns Samantha to cover up numerous times, which she does reluctantly (numerous times). Carrie then talks about how the veils across the mouth "freak her out." (Remember this.)

His name is actually Abdul and he tells her "like Paula," which makes her think he's gay. But must she call him Paula Abdul? Then, it's further implied Abdul is gay when Miranda has him pick out camel-riding outfits for the ladies, which look like Betsey Johnson parodies of the Middle East, and his lingering looks at attractive men.

I think this is just offensive to the Carrie and Big love story itself. Did the movie really have to go there?

6. Samantha's Birkin Bag Spills Out Condoms In A Suk

When men from a black market chase Samantha thinking that she stole one of their bags, they break open hers and naturally condoms spill out everywhere. Men in the suk (market) surround her and judge, which causes her to shout out, "Condoms! That's right, I have sex!" And then she gives the entire crowd the middle finger, and tells everyone to "Suck her dick" and "Bite me."

I have a feeling this was meant to be some kind of big girl power moment in the Middle East with Samantha standing up for a woman's right to sexual expression, and while it wasn't her fault that her condoms came flying out, the way she responded (i.e. telling a crowd to "suck my dick") would be disrespectful to anyone.

7. Carrie & Co. Wear Veils To Sneak Out Of The Suk

Remember when the veils freaked Carrie out? Well, now the SATC women are donning them to evade men who chase after Samantha, The Condom Offender. In order to get a cab, Carrie shows some leg. Seriously. I don't even know what to say anymore.

Also, the women aren't in a rush because they'll miss their flight — their big fear is that they'll get bumped and have to fly coach.

8. The Lesson Of This Movie Is There Were No Lessons

As Carrie narrates what all the women have learned over the course of the movie, I realized there were no actual lessons. Big finally gets Carrie her the piece of jewelry she wanted. Charlotte gets over her jealousy. Samantha bangs the Dutch guy on the beach with red, white, and blue fireworks in the background — because, America. Miranda gets a new job, because her storyline comprised of exactly three minutes.

Basically, we never needed this movie.

And that in itself is offensive.

More like this
Jennifer Coolidge Got A Lot Of “Action” Thanks To 'American Pie'
By Catharina Cheung
How Director Quinn Shephard Turned Dylan O’Brien Into A “Viral Weed Blogger”
By Samantha Leach
The Biggest Differences Between 'Bullet Train' & The Book It’s Based On
By Arya Roshanian
The Ending Of 'Prey,' Explained
By Morgan Leigh Davies
Get Even More From Bustle — Sign Up For The Newsletter