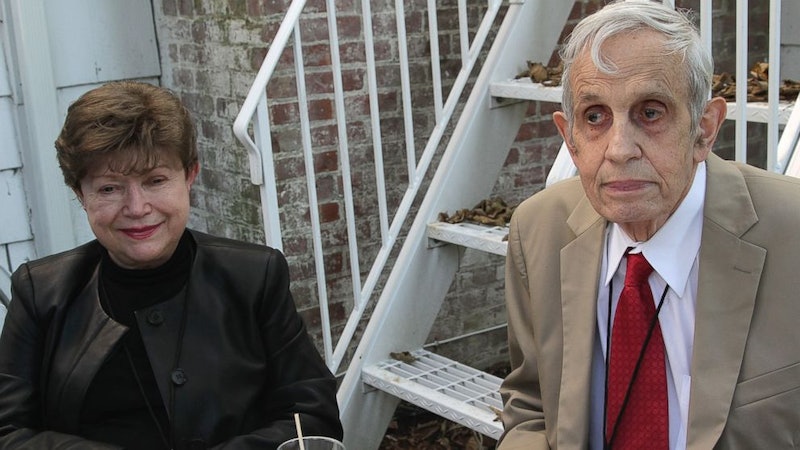 John Nash had been called brilliant. A genius. A "mathematical giant." But his story, which captivated millions due to a Pulitzer Prize-nominated biography and ensuing Oscar-winning film, was not his alone. His wife Alicia Nash, who was killed along with her husband in a car crash Saturday on the New Jersey Turnpike, had long been the brilliant woman behind the gifted mathematician — and changed his life.

At the time of the crash, the Nashes were on their way home to Princeton, New Jersey, from Norway, where John had just received the famed Abel Prize for mathematics, according to a statement from Princeton University. University president Christopher L. Eisgruber said Sunday:

We are stunned and saddened by news of the untimely passing of John Nash and his wife and great champion, Alicia. Both of them were very special members of the Princeton University community. John's remarkable achievements inspired generations of mathematicians, economists and scientists who were influenced by his brilliant, groundbreaking work in game theory, and the story of his life with Alicia moved millions of readers and moviegoers who marveled at their courage in the face of daunting challenges.

Although most talk about John and his ground-breaking work in mathematics and economic theory, Nash was also a talented woman with her own aspirations in the sciences. Nash was born Alicia Esther Lopez-Harrison de Lardé in 1933 in El Salvador, and her family settled in the United States in 1944. Just several years later, she entered the Massachusetts Institute of Technology as a physics major — one of 16 women in the MIT class of 1955, according to PBS. She hoped to one day be a scientist, a dream her parents also supported.

While studying at the esteemed university in Cambridge, Massachusetts, Nash met John, who was already teaching there in the mathematics department. They reportedly met in an Advanced Calculus for Engineers class, of which Nash has said in the past: "I walked into the classroom, and I thought he was very nice looking. He was like the fair-haired boy of the math department."

The couple married in a Catholic ceremony — even though John was an atheist — in 1957, just a few years after John ended a complicated relationship with a Boston nurse (he also had a child from that relationship, but according to his biography, refused to acknowledge paternity). Not long after their wedding, John's schizophrenia began to emerge.

The troubles for Alicia and John Nash began in 1959, when John reportedly began experiencing severe paranoia and delusions. Nash, meanwhile, was pregnant with the couple's first and only child. She had to make the difficult decision, then, to commit her husband at McLean Hospital, an institution located near Boston. Several other institutional stays — most of which were involuntary for John and made by Nash and John's relatives — followed.

Nash immediately moved the family back to Princeton, but John's condition worsened. In 1961, Nash filed for divorce — a detail that is left out of the movie version of A Beautiful Mind.

In fact, Nash remained divorced from John from 1961 to 2001, when the couple remarried 38 years after their divorce and John's devastating spiral into schizophrenia. However, she did remain very close to him during that time, acting, in many ways, as a caretaker for the struggling mathematician while also raising their son virtually on her own.

According to the biography A Beautiful Mind, Nash took John in as a "boarder" in 1970, when he was still suffering from severe paranoia and hallucinations. Though still divorced, she let John live in her home so she could ensure that he was safe.

"If she hadn't taken him in, he would have wound up on the streets," A Beautiful Mind biographer Sylvia Nasar told PBS in the American Experience documentary "A Brilliant Madness." "He had no income. He had no home. I think that Alicia saved his life."

When John accepted the Nobel Prize in Economics in 1994, Nash was at his side, despite their technical divorce. The couple remarried in 2001, and continued to live in Princeton.

Although Alicia Nash's life wasn't exactly like the narrative that was depicted in the movie A Beautiful Mind, there's a reason Russell Crowe, who depicted John Nash in the film, tweeted about the couple's "amazing partnership" on Sunday. For 60 years, Nash and her husband persevered even when she believed his illness had already won.

And when John fought his way out of the schizophrenic fog decades later, she was there waiting.

More like this
Revisit 1992’s 'A League Of Their Own Cast' Photos After The New TV Series
By Grace Wehniainen
At 28, Lesley Manville Was Acting, Picketing, & Singing Kate Bush Songs
By Olivia-Anne Cleary
What Is Ben Affleck's Net Worth? At 50, The Oscar Winner Makes 8 Figures Per Film
By Meg Walters
Dr. Anna Pou Is Still Practicing Medicine After Facing Murder Charges
By Brad Witter
Get Even More From Bustle — Sign Up For The Newsletter