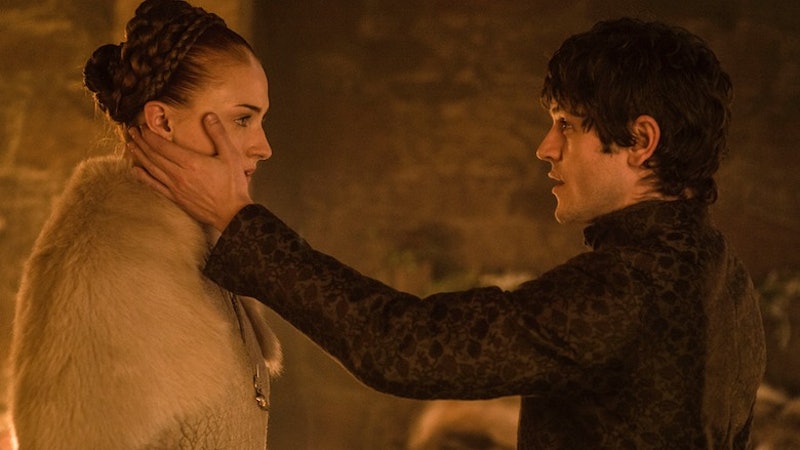 Honestly, I don't think I'm emotionally stable enough to deal with any more tragedy befalling Sansa Stark on Game of Thrones. Season 5 may have started out on a semi-positive note for the eldest surviving Stark child, but that was just to lull us into a false sense of comfort before all hell broke loose and things went from bad to worse for Sansa. Now she's married to Ramsay Bolton — part of Baelish's half-cocked plan to get her to be named Warden of the North in Winterfell and to gain more power for himself, of course — and must be subject to rape and brutality at the hands of her new husband. It seems like there's no way out, but Sansa is nothing if not a survivor, and I'm not quite ready to give up on her.

But in order for Sansa to make it out of this situation alive, she's gotta start making some moves. She was just starting to come into her own and believe in her own power before all of that was grabbed away by the twisted Bolton, and you can't tell me she's going to take it lying down. If she wants to get rid of the tyrant and reclaim what's hers, she's going to have to steel herself and step up to the plate. I don't know about you, but I think she can do it — and there are several ways things could go.

Baelish Comes Back With His Army And Kills The Boltons

Baelish seems rather preoccupied at the moment with proving his loyalty to the Iron Throne down in King's Landing, but that's only because he has no idea just what's been going on back in Winterfell. Once he gets word, however, he could very well bring the Vale's army north and wipe the Boltons out (though whether or not his army is powerful enough is another matter entirely).

Sansa Goes On The Run

It's unlikely that, after all she's been through, Sansa would just pick up sticks and go on the run. She's gone from one tyrant to another, sure, but as she pointed out last week, Winterfell is her home. She'd have to be pretty desperate to leave again, but anything's possible when you're dealing with a psychopath like Ramsay.

Sansa Lulls Ramsay Into A False Sense Of Complacency Before Striking

Sometimes the best way to beat an enemy is to pretend you're on their side until they trust you completely, then strike. This could be Sansa's best option of them all, making Ramsay believe that she is bending to his will, only to turn around and crush him later.

Considering how badly Reek has been tortured and brainwashed at this point, the likelihood that he'll actually be able to grow a pair (pardon the pun) and help his honorary sister escape Ramsay's hands is slim to none, but a girl can dream, can't she?

Arya Returns As A Faceless (Wo)Man And Kills Sansa's Captors

The longest shot of them all, but how amazing would it be if the Stark sisters were reunited and completely overturned their enemies together? Ugh, the whole thing is too delicious to even entertain. Once Arya masters the art of becoming a trained assassin that can wear her victims' faces at will, we might be onto something.