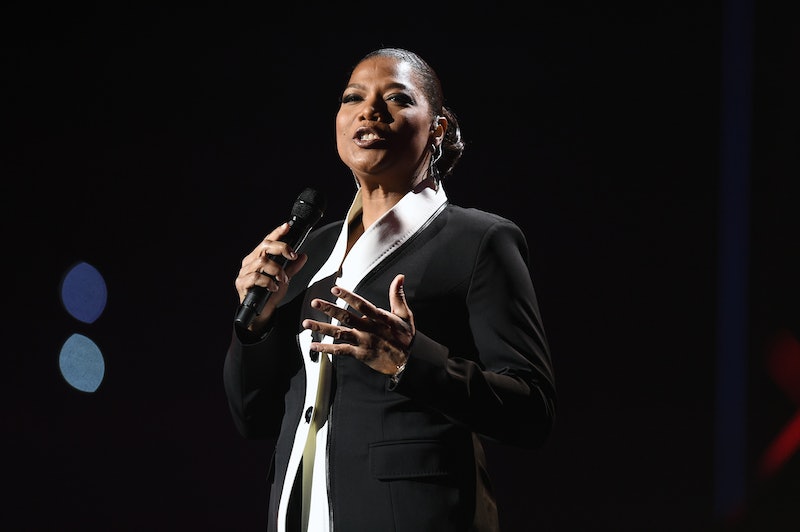 As a feminist, it can be hard to listen to rap songs a lot of the time thanks to misogynistic language from even some of the best artists making rap music today. But it's not always all about the "b*tches" and "hos" in rap music. There are quite a few rappers in the world that will talk about feminism, women's rights, and inequality of the sexes. Or at the very least, there are rappers who will produce records featuring lyrics that respect women, especially the mothers that raised them right through highs and lows. And when I hear music like that, my heart feels a little bit better. These lyrics are some of the more empowering and respectful of the bunch.

Many of the songs on this list are a little older, but hopefully now that more and more people are talking and singing about women's rights and feminism, we'll see progress in the way rappers focus their lyrics about women. It's going to take a long time. Not everyone is going to embrace the Beyonce way of life and just accept feminism and gender equality immediately. But if we can keep pointing out the rappers who have already attempted to make music that can be appreciated by both sexes, wouldn't it be great for those rappers and more to keep going up this road to actual equality in music? That would be a sight to see.

Tupac Shakur: "Keep Ya Head Up"

Tupac Shakur produced a number of records that empowered and respected women. The lyrics in this song are some of the best:

And since we all came from a womanGot our name from a woman and our game from a womanI wonder why we take from our womenWhy we rape our women, do we hate our women?I think it's time to kill for our womenTime to heal our women, be real to our womenAnd if we don't we'll have a race of babiesThat will hate the ladies, that make the babiesAnd since a man can't make oneHe has no right to tell a woman when and where to create oneSo will the real men get upI know you're fed up ladies, but you gotta keep your head up

This song, dedicated to his mother, showed that Drake's "sensitive rapper" description applied to respecting women like his mother. Hopefully he can keep this momentum going and write more songs about equality of men and women. That's the kind of Drake song I'd listen to on repeat forever:

When you have Mary J. Blige on your record, there's no way she'll let you get away with anything but respect towards women. But Method Man really stepped up with this song:

"Shorty I'm there for you anytime you need meFor real girl, it's me in your world, believe meNuttin make a man feel better than a woman"

This Canadian rapper has made quite a few records with empowering lyrics for women. "Keep Shining" is my favorite:

"There's no girls rapping so we're only hearing half the truthWhat we have to lose? Too muchHalf our youth aren't represented, the better halves of dudesSo we don't hear about your brain, just your brains"

"Doo Wop (That Thing)" is an incredible song because it shows that sometimes both men and women have trouble respecting women and seeing them as equals:

"Babygirl, respect is just a minimumNiggas f***ed up and you still defending themNow Lauryn is only humanDon't think I haven't been through the same predicamentLet it sit inside your head like a million women in Philly, Penn.It's silly when girls sell their soul because it's in"

Queen Latifah's songs about equality are epic, important anthems for people everywhere. It's the kind of rap we need to see more of nowadays. This entire song is feminism at its best:

"Instinct leads me to another flowEverytime I hear a brother call a girl a bitch or a hoTrying to make a sister feel lowYou know all of that gots to goNow everybody knows there's exceptions to this ruleNow don't be getting mad, when we playing, it's coolBut don't you be calling out my nameI bring wrath to those who disrespect me like a dame"

Salt 'N' Pepa: "None Of Your Business"

Another song that proves sometimes women can be the worst critics of other women. It's definitely a problem that we still have fix today:

This is a great start, Beastie Boys:

Kanye West's tribute to his mother is the kind of music he needs to continue to create. But now, let's make it even more empowering:

"You work late nights just to keep on the lightsMommy got me training wheels so I could keep on my bikeAnd you would give anything in this worldMichael Jackson leather and a glove, but didn't give me a curlAnd you never put no man over meAnd I love you for that mommy cant you see?"

Eve made a name for herself with songs that showed she was just as badass and kickass as the male rappers. This song about abuse was something deeper, something more. And it's easily one of her most empowering and one of her best, period:

...Love is blind, and it will take over your mindWhat you think is love, is truly notYou need to elevate and find"

A great song about the beauty of the "brown skin lady" that shows love, respect and honor for women:

A step in the right direction from T.I.:

Common is pure genius guys. A complete and utter genius:

"It's important, we communicateand tune the fate of this union, to the right pitchI never call you my bitch or even my booThere's so much in a name and so much more in youFew understand the union of woman and manAnd sex and a tingle is where they assume that it land"