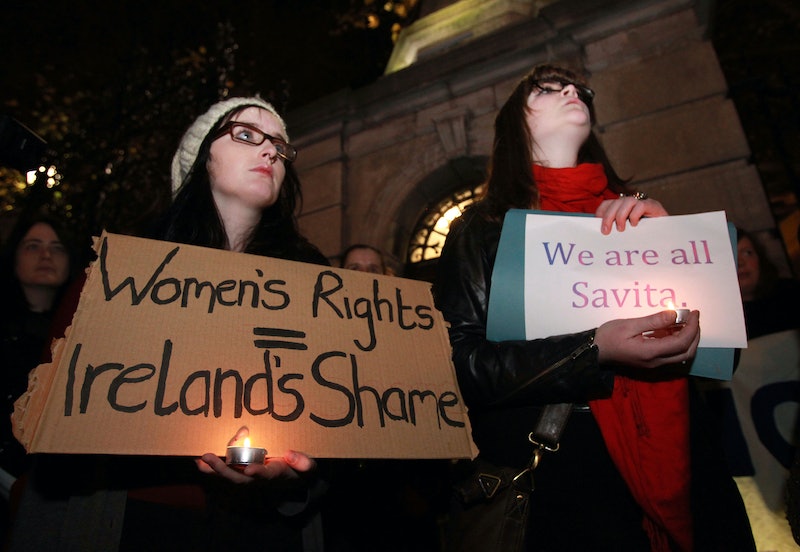 Ireland became the first country in the world to legalize same-sex marriage through a national vote — a kind of paradoxical feat, considering the Catholic Church's long-lasting influence on the county's laws and beliefs. Yet the success of Ireland's "yes" campaign, which led to 62 percent of voters on Friday passing the historic referendum, emphasizes what many Irish people have known for quite some time: Despite the pretenses of being a "Catholic country," Irish citizens have been gradually disassociating themselves from the Catholic Church and its more conservative teachings.

Archbishop of Dublin Diarmuid Martin, one of the highest-ranking Catholic clerics in the nation, told Irish news outlet RTÉ that the vote to legalize same-sex marriage was a "reality check" for the Catholic Church. "We [the Church] have to stop and have a reality check, not move into denial of the realities," Martin said.

But which realities of Ireland will the Catholic Church acknowledge, aside from the obvious push for full equality for gay citizens? While Ireland has now become a vanguard of progressive politics on the gay rights front, the nation is at the other end of the spectrum when it comes to reproductive rights — another issue that could enact great social change, but remains marred in Ireland's austere Catholic tradition.

Abortion is illegal in Ireland in all cases except for when a woman's life is in danger. The ban on abortion is enshrined in Ireland's Constitution, which states, in its Eighth Amendment, that "the State acknowledges the right to life of the unborn and, with due regard to the equal right to life of the mother, guarantees in its laws to respect, and, as far as practicable, by its laws to defend and vindicate that right."

The amendment has come under heavy criticism since it was introduced in the early 1980s, particularly in cases where the moral ethics of "the right to life" — and to whom that "right to life" applies — have been challenged. In the 1990s, the "X case" became the first major test of the law when a 14-year-old pregnant rape victim, assaulted by a much older man, sought to leave Ireland to obtain a lawful abortion. At first, a federal court barred the girl barred from leaving Ireland for the procedure, believing overseas travel to receive an abortion was unconstitutional. The Irish Supreme Court later overturned that ruling, and the Irish Constitution was amended to allow women to freely travel to foreign countries for abortion services.

But more than 20 years later, as gay rights accelerated throughout Ireland, abortion remains illegal. And the burdens placed on abortion-seeking women, whether underage rape victims, patients suffering serious pregnancy complications, or everyday women who want to terminate a pregnancy, haven't eased all that much.

The U.K. Department of Health estimated that about 3,600 women traveled from Ireland to either England or Wales in 2013 to obtain an abortion. The Abortion Rights Campaign, one of the Irish groups organizing for the repeal of the Eighth Amendment, states on its website that approximately 12 women leave Ireland everyday to obtain an abortion.

Irish girls and women who are rape victims — yes, even underage rape victims — are also forced to seek abortion services overseas. Last year, the story of an underage and pregnant rape victim, who was also believed to be suicidal, made international headlines after it was revealed that the state denied her request for an abortion. The state delayed her case for months, ultimately blocking her from traveling overseas for the procedure and forcing her to undergo a C-section at 25 weeks of pregnancy, according to The Sunday Times.

Her story highlighted some of the red tape pregnant women who are ill, whether mentally or physically, must untangle before obtaining a lawful abortion in Ireland. Under the Protection of Life During Pregnancy Act — passed in 2013 following the death of Savita Halappanavar, an Indian national who was denied an abortion while miscarrying a non-viable fetus — women can terminate a pregnancy when there is a "real and substantial risk" health risk, including suicide. Yet two doctors still must evaluate the patient and sign off on the procedure.

The process, taken from the handbook distributed to doctors in 2013, looks like this:

In many ways, Ireland's fledgling progressive movement mirrors the United States: As LGBT rights gain new, unprecedented ground, reproductive rights has fallen by the wayside. Abortion may be legal in the U.S., but the nature of that legality has become murkier over the last five years. And like Ireland, wads of red tape and legal bans remain while gay rights is seeing those same legal strictures loosened and freed all together.

In Ireland, there is hope that when voters go to the polls in the near future, they will be voting to repeal the onerous Eighth Amendment. On Sunday, Irish Labour leader and current deputy prime minister Joan Burton said the party's 2016 platform will include the right to a legal abortion.

However, Fianna Fáil (or "Republican Party") has continually opposed amending or repealing the ban on abortion. On the flip side, Fianna Fáil endorsed the "Yes" campaign for marriage equality. Fine Gael, which is currently in power in Ireland, is also opposed to repealing the abortion ban.

Just hours after Ireland's vote to rid itself of one of the Catholic Church's most ardent and definitive teachings, Irish citizens have begun thinking about the next major repeal. As the Catholic Church upholds that abortion can't be procured in any circumstance — even when a woman's life is in danger, unless it's to remove the fallopian tubes in an ectopic pregnancy or the entire uterus in the case of uterine cancer — the legalization of abortion in Ireland may indeed signify the toppling of the Catholic hierarchy.

If anything, it would be a more powerful defeat of old social mores than legalizing same-sex marriage. That's saying something.

More like this
How To Fight For Reproductive Rights, Based On How Much Time You Have
By Courtney Young
Why You're Seeing Green Bandanas At Abortion Rights Protests
By Lexi Inks
Jujubee’s Humble Reminder
By Sam Ramsden
Megan Barton-Hanson On Bi-Visibility & The Need For LGBTQ+ Love Island
By Sam Ramsden
Get Even More From Bustle — Sign Up For The Newsletter