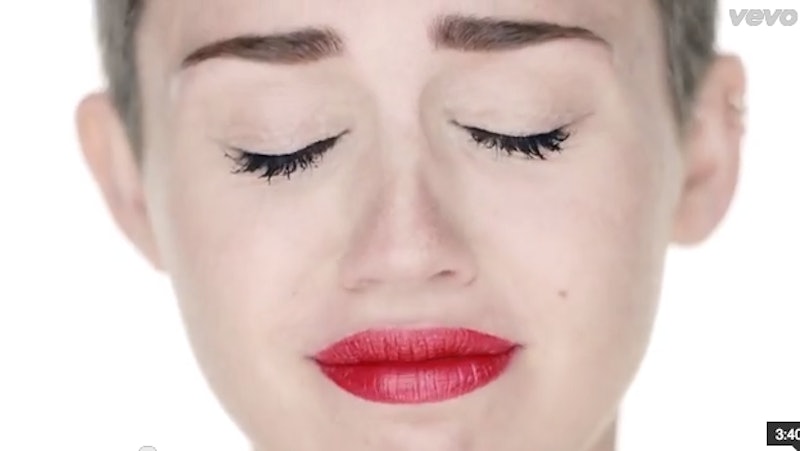 According to sources close to the star, Miley Cyrus has been drunk dialing Liam Hemsworth, and furthermore, they say that despite her cheeriness in public, she is sad and desperate to get him back. Below we imagine a drunk dial, in all of its unfortunate, terrible glory.

It's 1 a.m. on a Saturday night in Hollywood, and the fog above La-La-land fully obscures the stars. Liam Hemsworth sits on his leather couch next to his cradle full of kittens.

As he flips through the channels on his flat screen, looking for that documentary on the first British steam trains he saw advertised earlier, his mind wanders off in all different directions. He thinks of his niece, global warming, and his upcoming films, and he feels so relaxed that he walks to his vintage teak record player and puts on his favorite record.

God it's nice to have a private night in sometimes, he thinks, although truth be told, he does stay in rather often. As the dulcet tones of the Adagio from Rodrigo's Concierto De Aranjuez flow over him, he thinks he'll have a quick meditation sesh before bed, as he has to get up early for a work out and then a day on set.

As he walks out of the room though, his cellphone rings and buzzes on the table, a harsh jarring sound that wrecks any semblance of late night peace he had previously. "God dammit!" he says before stopping himself short. He's been trying to think positive thoughts and maintain a calm energy, just like his yogi says, but it's just too damn hard when he knows there is only one person that would call at this hour.

Yes, as he picks it up and looks at the screen, a sheen of sweat breaks out over his entire body. He takes a deep breath, and picks up the phone.

Liam: I thought I told you not to call for a few weeks, didn't I?

Miley: (slurring) but...you came in like a wrecking ball...I, uh, never fell so hard in love-

Liam: I know, I know. Your song is all over the radio, I know alllll about how you feel by now.

Liam: I'm not fucking bottle service, I'm your ex Miley, remember? Remember that we broke up? Darn it, and I promised myself and Swami Ramesh that I would try not to use negative language.

Miley: And whooooo exactly is Swanny Rafesh huh? Is she your new girlfriend or summin? Is she prettier tha me? Yaknow Liam, it reaallly hurts my feelings tha you —

Liam: Swami Ramesh is my new spiritual councilor Miley, he's been helping me to —

Miley: I FUH-KIN KNEW YOU WERE SEEING SOMEONE ELSE. Don you love me anymore? I know it ga messed up but uh.... when it comes to loving you, well I can't stop, an I won't stop an-

Miley: Well, Mr. Quitter, don' you ever say I just walked away, I will always loooove you.

Liam: Did you call me just to quote your own songs at me? Again?

Liam: I asked you not to call me that anymore Miley.

Miley: Well if you wan me to hang up, you know what you have to do.

Liam: Oh please, not again. Ya know, this is in large part why I wanted to break up, I'm so si —

Liam: Fuck it, fine. But I'm changing my number after this, okay? This is the last time I'm going to do this.

They start singing in unison:

I hopped off the plane at L.A.X. with a dream and my cardiganWelcome to the land of fame, excess, whoa! am I gonna fit in?Jumped in the cab, here I am for the first timeLook to my right, and I see the Hollywood sign

This is all so crazy, everybody seems so famousMy tummy's turnin' and I'm feelin' kinda homesickToo much pressure and I'm nervousThat's when the taxi man turned on the radio

So I put my hands up, they're playin' my songThe butterflies fly awayI'm noddin' my head like Yeah!Movin' my hips like Yeah!