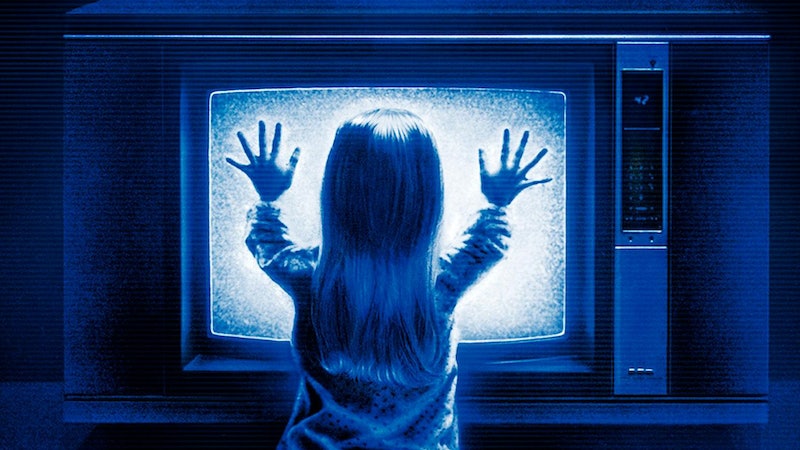 On Friday, a remake of the 1982 classic Poltergeist hit theaters. It earned itself a PG-13 rating for what is ultimately a haunted house tale with some nifty CGI thrown in for good measure. In 2015, the idea that a horror movie not aimed directly at kids (like the perfectly creepy Coraline) could get a PG rating is absurd. Horror today is such a gore fest there is no way the MPAA would let even a tame horror movie for adults be given a rating designated for family friendly fare. Oh how the times have changed. Back in 1982 when Poltergeist, which in my humble opinion is one of the scariest horror movies ever made, was released the MPAA was a lot more lenient because Poltergeist is certainly not a movie a seven-year-old should be watching. Especially if that seven-year-old lives in the suburbs.

Poltergeist is one of my favorite movies of all time. I vividly remember the first time I watched it. I was around 10 and the movie came on television. I was completely entranced by Carol Anne's creepy pronouncement, "They're here!" and I spent the next two hours becoming increasingly more freaked out as the family dealt with more and more paranormal activity. By the time bedtime came around I was so petrified of the TV I crawled in with my mom to ensure I made it through the night. To this day, Poltergeist still frightens me, but as an adult viewer it's not just the scary scenes that shock. After watching these scenes, you too will be asking yourself how Poltergeist ended up with a PG rating.

1. The Parents Smoke Weed In Their Bedroom

Early in the movie before all the crazy poltergeist business starts happening, there is a completely naturalistic scene between Diane (JoBeth Williams) and Steve (Craig T. Nelson) where they hang out in their bedroom, smoking pot, rolling joints, and discussing a time when Diane was a child and her father thought she might have been sexually assaulted after sleep walking. The scene grounds the film and introduces us to Diane and Steve, but can you image what would happen now if a PG film just tossed in recreational drug use like it was no big deal and had two little kids come into the room a moment later?

2. Robbie Gets Snatched By The Tree

Robbie is almost eaten by a tree outside his window. This little kid is literally yanked out of his bedroom window by a possessed tree. I have no idea how director Tobe Hooper made the scene look so realistic, but it still holds up today.

3. Carol Anne's Voice is Heard Through The TV Set

I know as a kid I thought of the TV as a close, personal friend. The TV is certainly not supposed to suck up small children and deposit them in purgatory where they get chased by evil monsters their parents can't see or protect them from. The fear in Carol Anne's voice is what sells this scene the most. Given how young she is, it makes the whole situation all the more disturbing.

Poltergeist is not an especially gory movie, but when it does get bloody it goes for broke with the double whammy of one paranormal investigator hallucinating his face getting melted off while the other watches a steak decompose right in front of him. I am still not over the face peeling — in what world is that kid appropriate?

One of the most impressive parts of Poltergeist is its emphasis on female relationships, especially between mothers and daughters. Ultimately, only Diane can save her daughter and she does so by going into purgatory to get her back. The visuals blatantly call forth images of birth, including Carol Anne and Diane being expelled from purgatory covered in goo and everyone waiting for Carol Anne to take a breath. The symbolism would go over children's heads, but what was the MPAA's excuse?

6. Diane Is Dragged Onto the Ceiling

Just when you think it's all over, Diane is forcefully held down on the bed by the demon before it sends her flying to the ceiling. The scene is both violent and sexually suggestive in a way that never fails to make me shudder.

There are a lot of urban legends surrounding Poltergeist, but one of those legends is absolutely true: the skeletons used in the movie were real human remains. The real kicker is no one told Williams they were real before she was put in the muddy pool with them. Her screams are not method acting is what I'm saying.

Even if you have never seen Poltergeist, you have probably seen the clown from Poltergeist. The clown was scary way back at the beginning of the movie when it was just leering at Robbie, but when it tries to strangle him at the end? Game over.

Now you know what a PG movie looked like in 1982, kids. Pretty different, huh?

More like this
Revisit 1992’s 'A League Of Their Own Cast' Photos After The New TV Series
By Grace Wehniainen
At 28, Lesley Manville Was Acting, Picketing, & Singing Kate Bush Songs
By Olivia-Anne Cleary
Florence Pugh Won’t Discuss Harry Styles Sex Scenes In 'Don’t Worry Darling'
By Grace Wehniainen
Amanda Seyfried Says She Felt Pressured To Shoot Nude Scenes At 19 Years Old
By Jake Viswanath
Get Even More From Bustle — Sign Up For The Newsletter