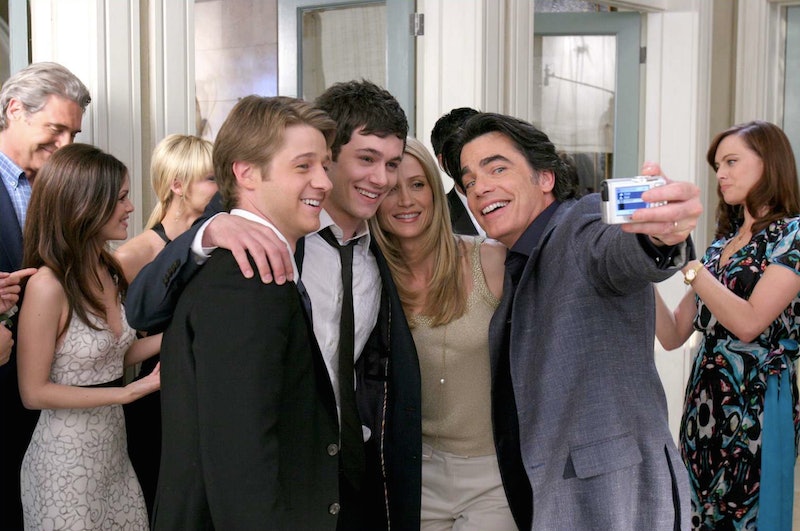 Well, another year has passed and The O.C. is still over. This harsh reality makes me cry on the inside (OK, and maybe a little on the outside, too), but luckily, all I need to instantly feel better is an epic marathon session, letting me re-live those magical four years in Orange County. Although the other residents of Newport Beach weren't too shabby, The O.C. 's true stars were the Cohen family, and they're the reason we still remember and love the show all these years later.

When Ryan Atwood stole a car with his delinquent brother, he was rewarded by being unofficially adopted by one of the best families in TV history. It's safe to say that since then, all die-hard O.C. fans have fantasized about being adopted by the Cohens — and not because they had the most spectacular house in Orange County. Being a Cohen involved celebrating made-up holidays, eating a steady diet of bagels and Chinese food, and receiving the best fatherly advice ever. They weren't perfect (although Sandy's eyebrows were), but no matter how tough things got, the Cohens always loved and supported each other unconditionally and weathered every storm together.

Sandy and Kirsten, please adopt me. I'll even steal a car and spend a night in lock-up if you promise to take me home with you. Here are 12 reasons why that'd all be worth it to become a true Cohen.

1. You'd Get To Celebrate Chrismukkah

Who wouldn't want to celebrate TV's greatest fictional holiday? All O.C. fans who are praying to be adopted by the Cohens: don't give up on a Chrismukkah miracle.

2. They Really Don't Mess Around When It Comes To Any Holiday

OK, so Valentine's Day was more Kirsten's jam than the rest of the family's, but Sandy, Seth, and Ryan indulged her because that's just how the Cohens roll.

3. The Family Who Serenades Together, Stays Together

In typical Cohen style, Sandy and Kirsten's anniversary was celebrated as a family. Continuing their tradition of celebrating every holiday in the most epic way possible, Sandy serenaded Kirsten at The Bait Shop and left teen fangirls pondering whether we wanted him to be our husband or our father.

4. Sandy's Version Of "The Talk" Is Basically The Best Ever

It's always a little awkward to tell your parents you're doing the deed, but Sandy and Seth's conversation took it to the next level. Gentleman, take it from Sandy: the appetizer is as good as the main course.

5. You Can Tell Sandy Anything

Sandy's busy schedule never got in the way of his willingness to listen to any and all problems Seth and Ryan needed to talk through. He had a knack for fixing any situation.

6. Sandy Believes His Kids Can Do Anything

...even before they're technically his kids.

It's no wonder Seth Cohen was the perfect boyfriend — Sandy and Kirsten set the best example of mutual trust, affection, and respect.

The Cohen family loved bagels as unconditionally as they loved each other. If you don't love bagels, you need not apply for adoption. I happen to adore bagels, therefore I have dibs.

After all, you gotta work up an appetite for all of the bagels and Chinese food.

10. When The Going Gets Tough, They Stick Together

Kirsten's battle with alcohol addiction was one of the toughest story lines to watch, but it was ultimately inspiring to see her recover with the support of her family. Remember when Ryan told her he couldn't watch another person he loved destroy herself? And when Seth was the one who finally convinced her she needed to check in to rehab? Excuse me while I shed a river of tears.

11. Their Selfie Game Is So Strong

Who needs a selfie stick when you've got Sandy around?

Only the most generous, kind family would take in a troubled stranger and treat him like their own. Ryan recognized this and he paid it forward — the series finale ended with him reaching out to a kid in need, just like Sandy did for him. Cue ALL THE FEELS.

Sorry, Mom and Dad, but I'm officially starting the process of becoming a Cohen.