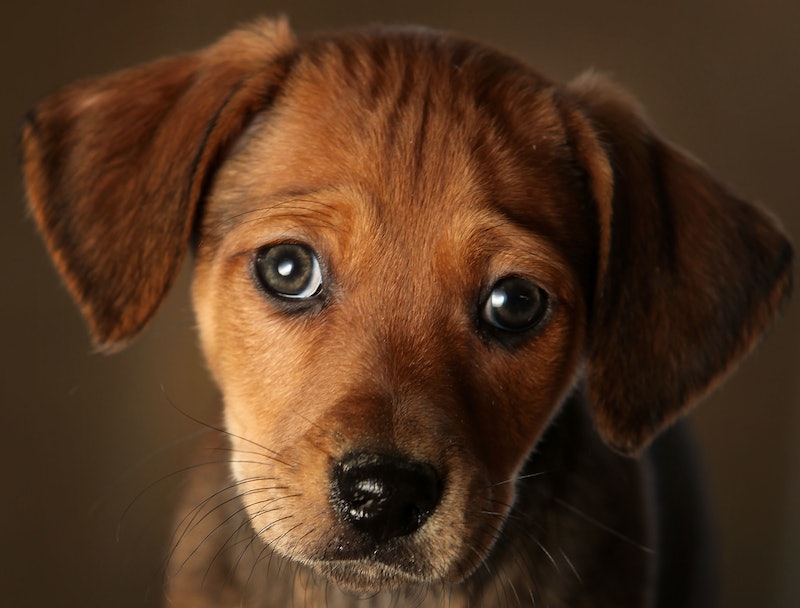 Sometimes, staring into the beady, neurotic eyes of my uncle's chihuahua, I find myself wondering, "How long have dogs been domesticated? Do they long for the days of their ancestors, when they didn't suffer the indignity of being... well, a chihuahua? Do they realize how closely related they are to wolves and wonder where it all went wrong?" Then the chihuahua does something like twitch violently or chase its own tail, and I remember that he probably doesn't care about anything other than dog treats and his ongoing feud with the neighbor's cat. I'm not the only one to be fascinated by the subject, however, which is why a considerable amount of research devoted to the special relationship between dogs and humans. Most scientists agree that humans and dogs became BFFs at least 16,000 years ago, but according to recent research, the relationship could actually extend back between 27,000 and 40,000 years. In order to pinpoint when domestication began, researchers look at when dogs and wolves parted ways on the path of evolution. Modern dogs are divided into four clades, according to The Scientist, which is how we know that domestication began at least 16,000 years ago: these four groups last shared a common ancestor back then. The Taimyr wolf is the last common ancestor between wolves and dogs, so scientists believe that dogs became fully domesticated sometime between the time of Taimyr wolves and modern dogs' common ancestor.

<img title="Image: https://31.media.tumblr.com/387577df5c50363643676f64a19c100d/tumblr_ms648nAC5m1sg6la2o1_500.gif" class="article-body-image" src="https://31.media.tumblr.com/387577df5c50363643676f64a19c100d/tumblr_ms648nAC5m1sg6la2o1_500.gif" alt="" height="294" width="500"/>Although previous estimates had put the split at around 32,000 years ago, researchers at Harvard Medical School and the Broad Institute found a bone fragment belonging to a Taimyr wolf in Siberia that dates all the way back to 35,000 years ago. "Dogs may have been domesticated much earlier than is generally believed," Love Dalén of the Swedish Museum of Natural History said, according to Science Daily. The alternative theory would be that a "major divergence between two wolf populations [occurred] at that time," and this divergence created modern wolves. Dalen, however, believes this would be unlikely, because that would mean the other line of wolves was completely wiped out.

The results also indicate that modern dogs are much more wolf-like than their owners realize. DNA research provided "direct evidence" that Siberian huskies and Greenland sled dogs share a significant number of genes with the Taimyr wolf. If you're a dog person, this is probably just a nifty fact. If you're not a dog person, don't be afraid to use this information next time a dog owner tries to tell you that the massive animal straining against its leash to get to you is "just a big softie, really." Whether you're a dog person or not, though, it's pretty hilarious to know that this: