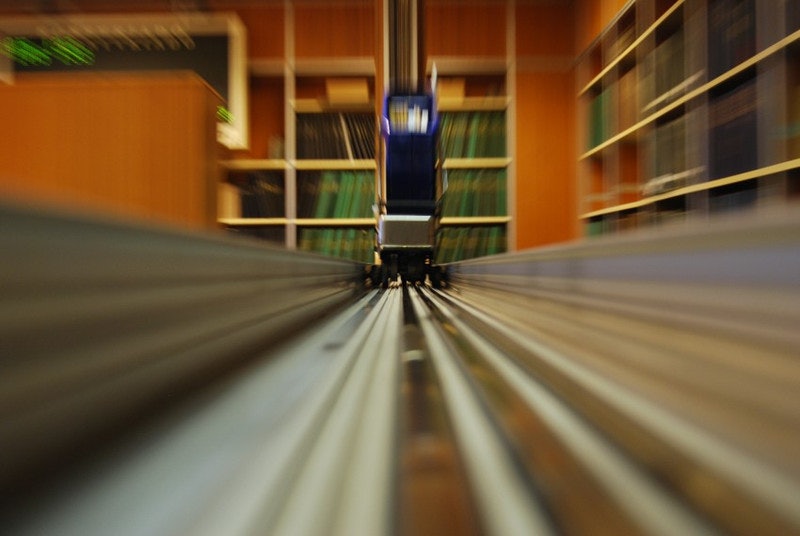 Who says libraries can't be fun... for the books? The creators of the Telelift book transport system (aka awesome book roller coaster) at the the National Széchényi Library in Budapest, Hungary clearly believe in the shelf-life satisfaction of books. There'll be no squeaky push carts for these books, and, for customers, no long waits while the librarian trudges up 10 flights of dusty stacks stairs. Nope, these books ride in style from the stacks.

Through an intricately designed system of carts, conveyors, rails, and magnetic switches, the transport system brings books from the stacks to different locations in the library. Yep, it's basically a roller coaster transport system. For books.

With 3.7 miles of tracks and 40 different stops or stations, the system boasts a 10 to 15 minute ride for books to arrive where they're needed. And that's pretty darn good for a library with more than 2.5 million books, and that's not even counting periodicals, audio, etc.

Check it out in action:

If you're already wondering how you can get one of these things installed in your house, maybe with a built-in whiskey dispenser somewhere. Well, there aren't any prices listed on the Telelift website, but Gizmodo estimates that the whole system cost around $1 million to install in the Széchényi Library in the 1980s. So... yeah.

Other libraries have incorporated the system into digital book return kiosks. Telelift has different types of transport systems now, and even though the first one was specifically designed for libraries, they've branched out to include medical supplies transport in hospitals and parts delivery in car shops.

The system at the Széchényi Library was purchased in the '70s, and has been installed there since 1985. So it's not all bright and shiny and new, But it's still pretty cool, right? Definitely, at least, cooler than the actual presumed future of books: you know, e-books. But imagine if this had caught on... go ahead, let yourself drift of into imaginings of a city-wide steampunk-style book delivery system.

Oh, the library is also super-pretty on the outside. Just in case you were wondering.