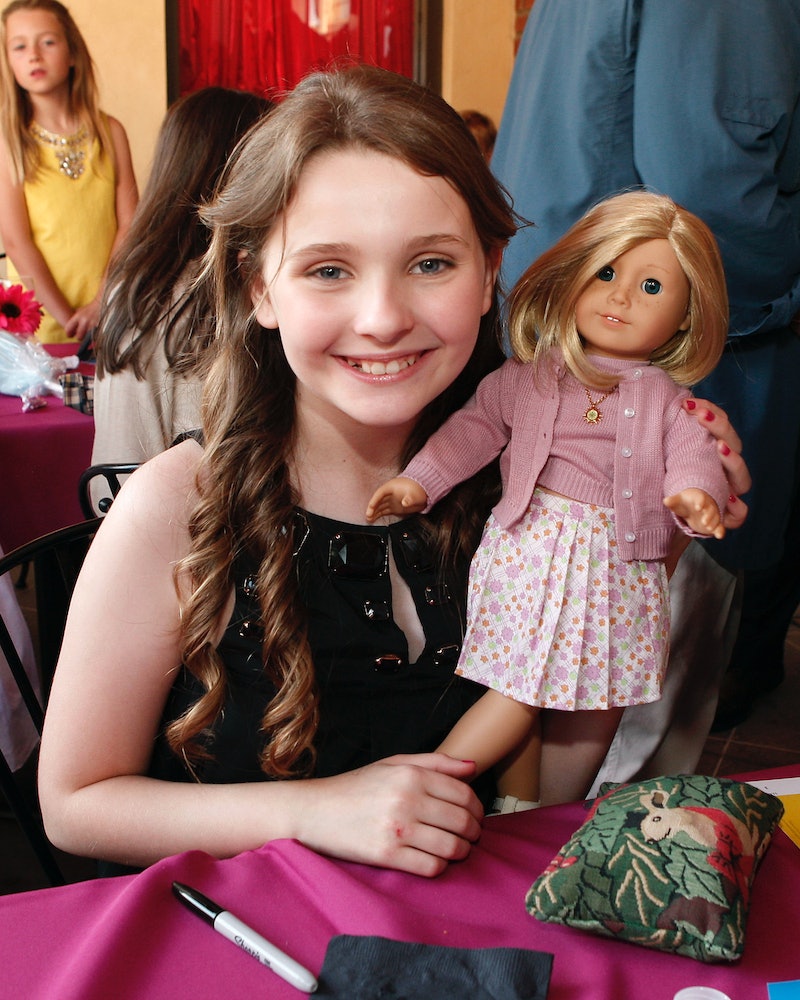 When I learned that Mattel, the maker of the American Girl dolls, had been eschewing the history-rich stories of their original dolls in favor of more modern and superficial characters, it made me think back to my first American Girl doll.

A box under the Christmas tree had aroused my hopeful suspicions and on the big day I opened it to find Kirsten Larson. She had blonde hair and blue eyes, just like me. Even our names were similar. Truthfully, I'd wanted a Samantha doll but my mother wouldn't have any of it: Samantha, she said, was "born privileged." At a time when my mom's blazing feminism was at its most vocal, she wanted to teach me the DIY, pioneer-spirit independence of Kirsten. Because a girl's gotta get things done in blizzards and on wagon trails and during epidemics — no one else is going to do it for you.

So Kirsten and I became inseparable. We would spend days in the guest bedroom going on adventures. The carpeted floor became a blank canvas for America. Sometimes Alyssa would come over with her Samantha and the girls would go on inconceivably long train journeys together to Chicago or across the country, aided by plot lines from Oregon Trail II (River crossings! Plague! Accidental gunshot wounds!). In December I'd open up my American Girl cookbook, break out a hair wreath made of fake pine boughs from Michael's, and make St. Lucia Day buns in Kirsten's Norwegian tradition. Super-fun times for an only child.

Given my own lack of siblings, I soon decided Kirsten needed a sister. After much scrimping of my $3.50/week allowance, Josefina arrived. I found her story, which wove elements of Latino culture into the history of America, beautiful. Also I liked her clothes. And so the Scandinavian girl and the Latina girl got along, no questions asked.

Long after Kirsten and Josefina were packed away in a plastic bin in my parent's basement (against all rational sense, I felt guilty bundling them up at age 13: What if they can't breathe?!), I realized how much they had given me. They taught me that ethnicity is something to be cherished, that people from all backgrounds shaped and continue to shape America. They gave me a sense of adventure that has seen me to 23 countries. When Kirsten burned down her family's barn by knocking over an oil lamp, I learned that confessing a wrongdoing wasn't the end of the world — and that I should have a new appreciation for electricity.

With the newer incarnations of the American Girl dolls, Mattel is taking a new approach, and ultimately a detrimental one. The former collection taught of history, diversity, and fighting against brutal hardships. But now Felicity, Kirsten, and Samantha have retired to what I imagine as the big American Girl Log Cabin in the Sky.

Now you can custom-make dolls to look like yourself, and topics like the Civil War have been replaced by story lines of spa days and training horses for the fundraising parade. And if the struggle of deciding which face mask to pick on your spa day with your look-alike are what define American girls now, then it shows we value similarity over difference.

Behold the story of 10-year-old McKenna, the 2012 American Girl of the year: "Ten-year-old McKenna Brooks has always excelled in school and in gymnastics. So when her grades suddenly fall, McKenna begins to doubt herself. With the help of a new friend, McKenna learns to focus on her strengths to overcome her challenges, one step at a time. But just as she begins to shine in school, McKenna is sidelined with a gymnastics injury. Will McKenna be able to springboard to success again?"

Will her promising pre-pubescent gymnastics career take off? Excuse me while I don't hold my breath. In the dolls' previous iterations, Marta died of cholera. Addy watched loved ones endure slavery. Molly's family fretted over their rations. Samantha spoke against child labor. The girls catching butterflies with today's Lanie dolls are missing out on these stories and lessons. The Atlantic points out:

Organic gardening and school art supplies are perfectly acceptable issues for young girls to tackle, but contrasted with Samantha taking on the entire practice of child labor (as opposed to just rescuing her one friend from factory exploitation), these plotlines keep good works close to home, focusing only on issues that affect their own backyards and school days. Problems that mainly affect people who, echoing the My American Girl dolls appeal, look "just like me."

In their revamp, Mattel's traded in substance for style, history's great moments for mani-pedi outings. And in today's ever-diversified, ever-globalized world, where income gaps are increasing, materialism is the order of the day, and Twitter is dominated by #firstworldproblems, that's exactly the last thing our American girls need.

More like this
What The History Of Pride Month Means For Celebrations Today
By Jay Polish
25 Quotes About Love To Share During Pride Month 2022
By Madeleine Aggeler and Emma Garza
Meet The Spice Company Founder Who Sees Chai As A Metaphor
By Madhuri Sathish-Van Atta
Remember These Ancient Pieces Of '90s Tech?
By Lucia Peters and Emma Carey
Get Even More From Bustle — Sign Up For The Newsletter