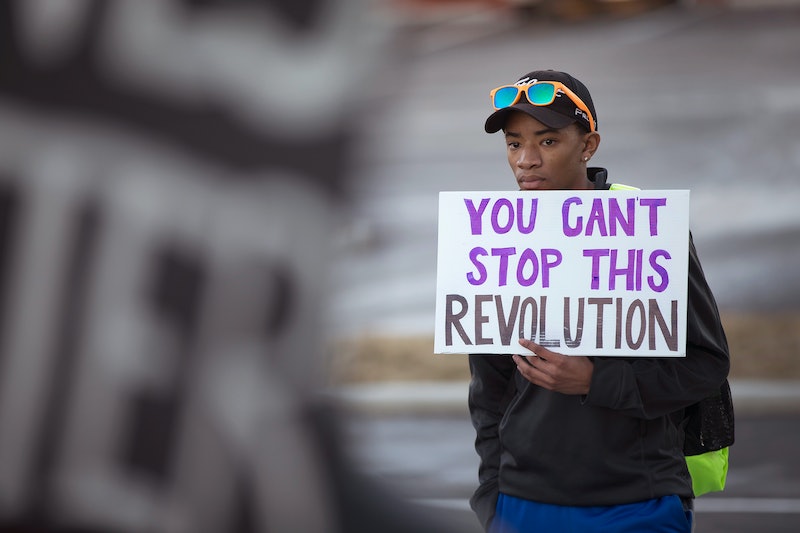 Over Memorial Day weekend, the #BlackLivesMatter movement reignited in several cities. From San Francisco, where a African American Policy Forum report sparked demonstrations focusing on police violence toward women, to Cleveland, where crowds gathered to oppose the acquittal of an officer who shot and killed two unarmed black men, the holiday weekend saw fresh Black Lives Matter protests pop up around the country, continuing the national cause to end police brutality and bring justice to victims.

Last Wednesday, the African American Policy Forum released a report titled "#SayHerName: Resisting Police Brutality Against Black Women," which shed light on the number of women who have been killed or sexually assaulted by police. Following the release of the report, and as part of a nationwide demonstration to protest the deaths of black female victims of police violence, like Aiyana Jones, Yvette Smith, and Rekia Boyd, protesters gathered in San Francisco and New York last Thursday, ahead of the Memorial Day weekend. The group in San Francisco set themselves apart from other #BlackLivesMatter protests by demonstrating topless "to make people stop and pay attention to the fact black women are being killed," one protester told USA Today.

The #SayHerName protests continued into Monday, when they spread to Atlanta, Georgia.

On Saturday, waves of protesters stormed the streets of Cleveland after Judge John P. O'Donnell acquitted Officer Michael Brelo in the 2012 fatal shooting of unarmed black victims Timothy Russell and Malissa Williams. Many protesters formed a line on the Cleveland Memorial Shoreway freeway, blocking traffic as police tried to control the crowds in riot gear.

In L.A. on Monday, protesters started at least six simultaneous demonstrations, with one of the most discordant occurring in the suburb of Cerritos, where crowds shut down an intersection and blocked traffic for more than 15 minutes. The protests were staged in remembrance of Ezell Ford, a mentally ill unarmed man who was shot and killed by officers last August, and Nephi Arriguin, who was shot and killed earlier this month when he allegedly tried to hit an officer with his car.

Take a look at all the #BlackLivesMatter protests around the country that brought police violence back to the forefront over Memorial Day weekend.