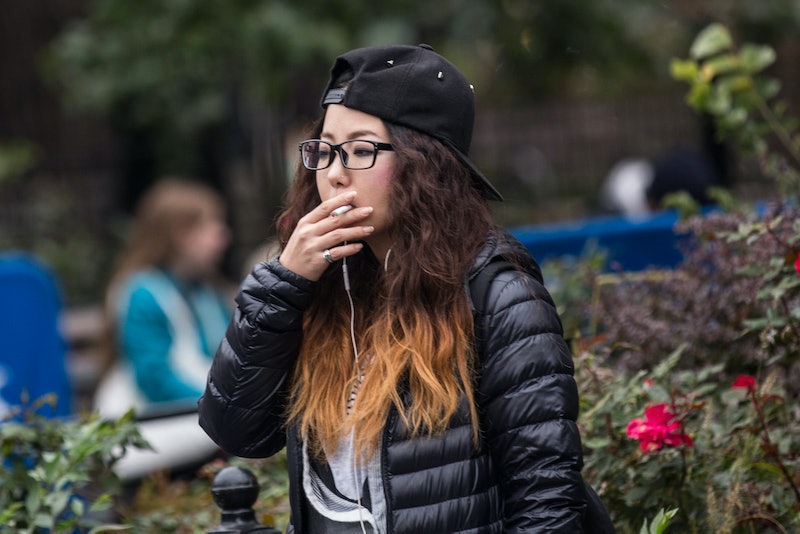 Despite generations of anti-smoking ads and graphic campaigns about its dangers, smoking's still a big part of our society: one study estimates that 18 percent of the adult American population smokes. And a huge amount of those people are, at one time or another, trying to quit smoking — 35 million people at any one time, apparently — with a pretty low success rate. Is nicotine just that amazingly difficult to kick? Or is there something particular about certain types of human brain that make it seriously tricky to keep away from the cigarette counter in the first place?

There are all kinds of studies around about the best way to quit smoking. E-cigarettes are offered as an easy "transitional" solution, though scientists are currently arguing about whether they're the real key to kicking the habit. (We'll get to some other hot solutions, from meditation to gambling, in a bit.)

But a new study has discovered a crucial difference between different "smoking" brains, which may explain why some people keep getting onto the nicotine patches only to fail time after time. If you're struggling massively to stop smoking, or have quit smoothly and are feeling smug about your own superior willpower, sorry: either way, your success may be all in your head.

The way nicotine spreads through the brain also contributes to how damn addictive it is. Nicotine, an alkaloid, actually only makes up five percent of tobacco products, but it's the bit that hooks the brain by rewiring it and giving us a pleasurable "hit." Other additives in tobacco also seem to help to get us hooked, but it's nicotine that hits hard and fast — within 10 seconds of inhalation, the nicotine level in your brain peaks — and then dissipates within minutes. Hence the craving for more and greater highs. Bastards.

Many cigarette smokers report "cravings" that are brought on by certain prompts, like seeing other people smoke, or an activity they associate with grabbing a cigarette. These prompts are known as "reactive cues," and they're formed because nicotine actually stimulates the reward center of the brain, giving smokers a feeling of peace and pleasure. We're pretty simple creatures: we like stuff that feels good.

The new study, published in the magazine Neuropsychopharmacology (in case you were looking for a snappy name for your next pet), highlights something interesting: you're less likely to be able to quit if you can't resist cravings, and it turns out that some brains find that much harder than others. The reason? A kind of coupling mechanism between parts of the brain: the insula and the dorsal anterior cingulate cortex (DACC).

The DACC, which processes information from the outside world, plays a big role in your decision-making and reward-seeking behavior. (If you choose to nab a cookie despite the fact it's breaking your diet, the DACC is where that decision was made.) The insula, meanwhile, is a hugely influential bit of your brain, but the relevant part here is that it produces cravings. Studies have shown that if the insula is damaged, by stroke or head injury, smokers simply don't want their death sticks any more; it takes away the urge completely.

The sucky bit? If you got hooked on cigarettes and now can't seem to quit, no matter what you try, it may be because the insula and DACC are so well-connected. The cravings feed heavily into your decision-making, and next thing you know you've grabbed another packet of Marlboros. A good connection in your brain sometimes isn't such a great thing after all.

So, How Can You Quit?

First things first: no, you cannot go into your brain, wiggle around a needle and disconnect your insula and DACC. However, an interesting idea about changing the size of the insula may be of some help: It turns out that people who meditate and use mindfulness regularly have bigger insula, and also have fewer cravings for addictive substances. The exact relationship between meditation, the insula, and cravings for nicotine are still being outlined, but it seems pretty clear: getting yourself a meditation cushion and a soothing soundtrack might be a good way to train your brain to resist tobacco.

Or... you could gamble against yourself. A 2014 study from the University of Pennsylvania showed that organized bribery is actually a pretty good way to tempt people to quit: if study subjects gambled their own money ($150, to be exact) on being able to quit, they were much more likely to quit than those who were just given a lump sum if they managed to stay clean. Bottom line: we hate losing our own money and love having a bit of quiet time.

Of course, there's big money in figuring out the silver bullet for quitting, and suggested strategies use anything from social pressure from your family to targeting your menstrual cycle: women, according to a new study, should quit just before their period, possibly because the hormone estrogen has a role in the regulation of cravings.