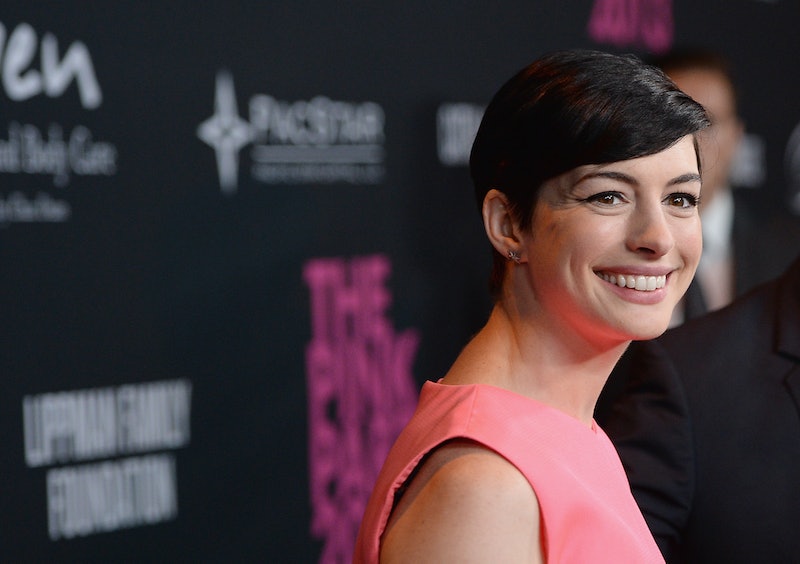 Do you remember when Anne Hathaway was a golden girl? When she was an ugly duckling-turned-swan in The Princess Diaries, and everybody's hair icon in The Devil Wears Prada? Back when we even tolerated her in The Dark Knight Rises, despite the controversy surrounding her casting, because she gave a solid performance and didn't completely send Eartha Kitt rolling in her grave? So what happened? How did this Oscar-winning, Prada-wearing, smile-having starlet earn the title of 2013's most annoying actress, usurping the likes of Gwyneth Paltrow? What's feeding the "Hathahaters"?

The answer isn't easy. In 2013, Anne Hathaway revealed what some deemed her true toothy, false, pretentious self in a serious of unfortunate moments that cemented her status as Intolerable Hathaway. And, in doing so, this talented, beautiful actress managed to alienate nearly every living person living on earth (except Oscar voters, apparently). So let us trace Mrs. Hathaway's fall from grace, shall we? The whole Anne Hathaway hating crisis started when...

She Weighed in on Her Performance as Fantine

In December of 2012, the porcelain-skinned lady told MTV that when she watched herself play Fantine in Les Miserables, she cried. Of course, she immediately realized how terrible that sounded, so she attempted a save.

So when I saw it, I did cry, but not because of what I was doing [on screen]. It was because I was back in the process of making it. The rest of the film made me bawl like a baby.

Unfortunately, most continued to see Hathaway's comment as a veiled way to prop up her own performance.

Then She Complained About Having to Lose Weight

All. The. Time. We get it — the whole weight loss thing was hard. But unlike other actors, who have brought up the process and, in turn, criticized the industry for the pressure of method acting, Hathaway played fragile. (Perhaps Hathaway's Fantine method work continued post-production?) She even admitted to The Los Angeles Times that her director felt she took it too far.

Woe is you, Annie, really.

In fact, it perfectly encapsulated her word vomit problem. Of her performance of Fantine, she said:

I tried not to think about myself that day because I was in a very unkind place. Fantine did nothing wrong. And I think that's where I was getting in a lot of pain because of it. She's innocent.

To boot, when asked how she felt about her performance she simply said, "Eh." That's after already admitting she was moved to tears while watching it.

And Then There Was the Matter of Her Pixie Haircut

Technically, Hathaway had been sporting the pixie for a good while before the rage over it really began brewing in early January. It's not that everyone hates short hair – Charlize Theron, Halle Berry, and even Edie Falco get major praise for theirs – it's her short hair. That's right, even Hathaway's hair stirred up emotion in the Hathahaters. Why? Perhaps it was just too polished and prim, much like the actress circa Oscar season herself.

But Her Hair Could Have Been Forgiven... If It Wasn't for Her Globes Speech

And Her Hijacking of Les Misérables' Golden Globes Win

She Feigned Surprise at Every Award Show Before the Oscars

She deep-breathed her way to stage of the SAGs, the Globes, the BAFTAS. Have you learned nothing from Taylor Swift, Anne?

Of Course, There Was Also Nipplegate Working Against Her

Not only did Anne change her Oscar dress at the last minute, a huge fashion industry burn, because her Les Mis costar Amanda Seyfried was wearing a similar gown, but the dress she chose showcased pleats that appeared to accentuate her nipples. And the award for Biggest Fashion Misstep Goes To... Hathaway, who was making it too damn easy for her haters.

As For That Oscars Speech...

She started her speech with the phrase "It came true!" and then later admitted to rehearsing the moment. We don't want our actresses to be acting all the time, Anne. If only she took a page from Jennifer Lawrence, who was comfortable (literally) tripping up. 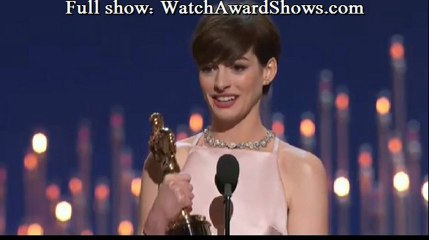 Her Response to Her Haters Only Fanned the Flames

Anne knew that her speech rubbed folks the wrong way, and it hurt her feelings. That's a very real thing, something that could definitely elicit sympathy. But the actress, in describing her plight, alluded to physics — a response deemed a bit too pretentious for those eager to hear a down-to-earth Hathaway. Her words:

But you have to remember in life that there's a positive to every negative and a negative to every positive. The miracle of the universe is that, as far as they know, there's 51 percent matter versus 49 percent anti-matter — things tip in the scale of the positive. So that is what I focus on.

And Then She Took Break from Acting

In theory, that should have stopped the hating madness because, honestly, it isn't easy to regularly insult a celebrity you see on the big screen so irregularly. But haters still saw her everywhere else: Charity galas, magazine covers, GIFs, the list goes on. And while some could forgive her for that, others just can't get over her hats.

All we can say is that eventually, like a great big smiling Phoenix, Hathaway will emerge from the ashes of her amazing/terrible year, and probably earn back her place in the hearts of America. Here's looking at you 2014! Save Anne Hathaway from her bad media decisions.

More like this
Why Sarah Jessica Parker Wanted Fans To Stop Calling Her Hair Choice “Brave”
By Brad Witter
Lizzo Proved She’s Team Jeremiah During Her ‘The Summer I Turned Pretty’ Review
By Grace Wehniainen
Jurnee Smollett’s Heart Is Healing
By Rebecca Carroll
What Is Miles Teller's Net Worth? How The 'Top Gun: Maverick' Star Made His Millions
By Meg Walters
Get Even More From Bustle — Sign Up For The Newsletter