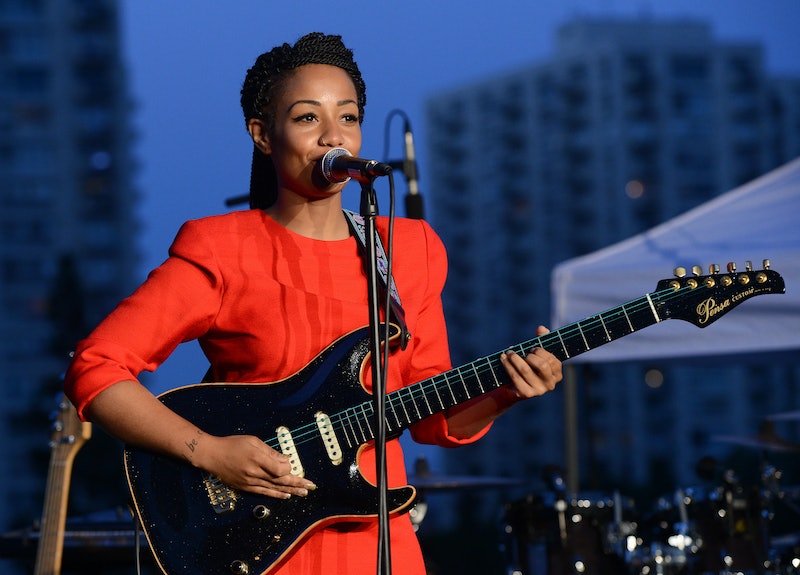 It's not hard to acknowledge the influence fashion has on music and vice versa. Some of my favorite fashion inspirations are, in fact, women in music, and it's a common desire for many of us indie lovers to get in on the indie music fashion trends as soon as we see our favorite band and singers step up on the stage.

I've always been interested in what a band or singer decides to wear at a gig, a live television performance, or how they get styled on the covers of magazines. Obviously, clothing choices can be hugely indicative of the way that musicians want to represent themselves, as they tell us a bit about what particular aesthetic or style he/she wants to be identified with.

Who can forget the always-emerging and ever-evolving fashion of singers like Bjork or Lady Gaga? The reality is that these icons are almost as widely known for what they wear as what they sing.

If you're in need of some fresh fashion inspo (or just want to want to know about some cool ladies of indie music), I've put together a list of nine of the raddest indie music fashionistas I know of. From the casual ensembles Marika Hackman wears to Lykke Li's dark and mysterious looks to the one-of-a-kind makeup of CocoRosie, there's much to drool over and get madly inspired by in these unique and creative songstresses.

Oakland, California born Jennah Bell has a unique look that blends her eclectic style of folksy music together with her impeccable sense of casual urban dress. She wears everything from bright and bold colors to lots of denim and all the subtle colors in between. And she's usually rocking any look with her gorgeous, long dreadlocks.

You can usually spot Swedish indie pop singer Lykke Li in her signature dark or black clothing. She's got mystery surrounding any outfit with all that black. But the best thing about all her dark clothing is Li's ability to mix and match pretty much any top and bottom together to create endless looks — even if said looks don't have much variance in color.

Marika Hackman's seemingly normcore look with mostly muted colors keeps a certain balance to the altogether haunting echo of her voice and music. She has been seen rocking a turquoise hue in her blonde locks as well, which hasn't failed to go out of style yet. The British singer also went to school with and befriended model Cara Delevingne — which can't hurt your sense of style either, I imagine.

Not one to post many selfies on Instagram, Annie Clark, who goes by the stage name of St. Vincent, isn't afraid to go all-out in wardrobe for her shows and photo shoots. She's bleached her hair a grayish platinum, rocked out some stunning eye makeup, and generally worn black leather like it's nothing. A true rockstar.

The Toronto-based singer-songwriter from the band Cold Specks takes things to another level with her wardrobe. She's got a vintage and elegant vibe to her sartorial choices that makes you feel like she's coming from another era. Her ability to tap into her Somalian roots perfectly enhances her style, and combined with her tantalizing voice draws you completely in.

The vocalist for Portland, Oregon-based band Kye Kye, Estonian-born Olga Yagolnikov rocks her dark, loose curls usually paired with some version of a black and white ensemble. I love how she's paired a striped crop top here with a blazer and some boots. Rocker chic at it's best, right?

An indie dream on the scene since the late '90s, Jenny Lewis was the lead vocalist for Rilo Kiley before she ventured out in her own solo career. Her style has always been somewhat '70s vintage paired with a modern cuteness factor with lots of dresses and boots. She's got a traditionally girly look associated with her early stage fashion, but she's recently been rocking the pantsuit in varying versions of rainbow colors for her latest album in 2015. If you needed any more reason to get a pantsuit now, well, Jenny Lewis is definitely that reason.

The babes in the quirky indie band CocoRosie, sisters Bianca and Sierra Casady, are emphatically known for their utterly unique, experimental musical style; but they don't just stop there. Their makeup and clothes are incredibly colorful and quirky. If you're looking for a way to use cosmetics that's far from average — but not too similar to that of a clown — take a look at some of their 'grams for some fun style inspiration.

If you're wanting a style guide for long, white-blonde hair that's been completely chopped into a perfect pixie cut, you don't have to look any further than British folk singer Laura Marling. She went for a totally new look from her early style, and it's proven to be a fantastic move for her both fashionably and musically. Marling has a truly folksy vibe to her wardrobe — a mixture of British nu-folk and laid back L.A. style, with lots of casual and oversized tops.