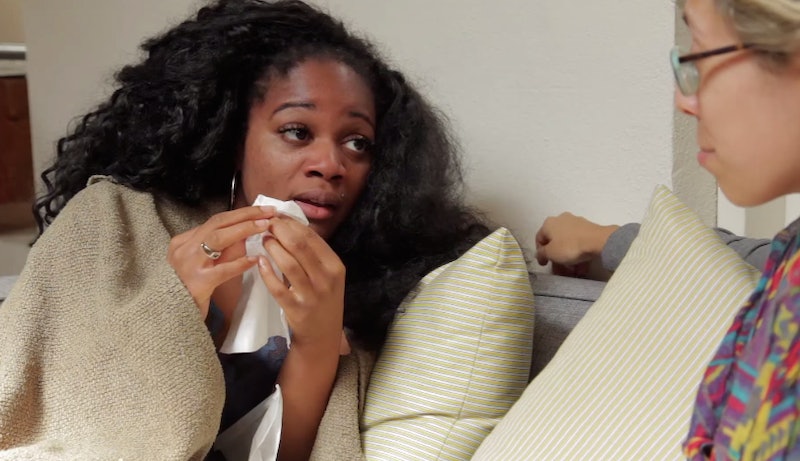 It's no secret that mental health isn't taken quite as seriously as physical illness. There's still, even in our deeply voyeuristic, over-sharing, social media society, a stigma attached to mental illness. BuzzFeed's video "If Physical Illnesses Were Treated Like Mental Health Problems" highlights just how much of a stigma exists. And as you can probably imagine, it makes the way we treat mental illness look utterly ridiculous. The video poses the question: Isn't it time we started taking mental illness more seriously?

Showing people in different states of disrepair, from the flu, to broken bones, to even diabetes, the video highlights the skepticism of people to mental illness by acting casually to these physical illnesses, which we know no one would ever do in reality. The point is, that just because you can't SEE an ailment, it doesn't necessarily mean it's not as real or as painful as an illness you can see. The insensitivity of people towards mental illness is in sharp contrast to the way be treat people and expect to be treated in the case of mental illness. Here are some of the responses to physical illnesses in the video that are actual, real responses people have towards mental illness, to show that we should be treating those illnesses with as much magnitude as we treat physical ones:

5. Showing an offensive lack of empathy

See more of the offensive, insensitive ways in which people treat mental illness by watching the same attitude applied to physical illness below:

More like this
This Viral TikTok Trend Is Exposing Everyday Scams
By Sophia Moore
American Girl Doll Memes Are Going Viral On Instagram & Tiktok
By Emma Carey
What Is A “Softboy?” The TikTok Term & Aesthetic, Explained
By Courtney Young
Why Are TikTokers Slapping Each Other With Tortillas?
By Courtney Young
Get Even More From Bustle — Sign Up For The Newsletter