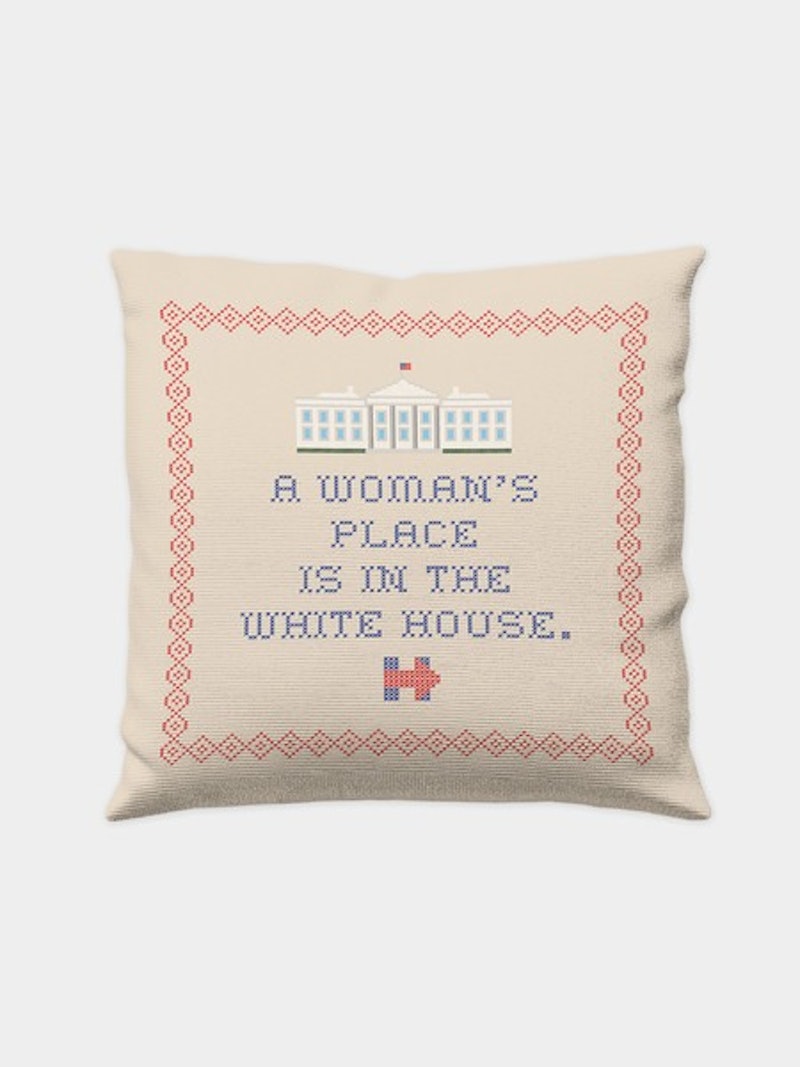 As Hillary Clinton continues to ramp up her campaign for presidency, she's finding ways to stand out from the rest of the 2016 pack. And one of those ways is with the glorious merchandise on HillaryClinton.com, which debuted on Tuesday. To be fair, it was quite a challenge to beat the wonderfully strange offerings in Rand Paul's online shop, but I think Hillary succeeded. Among the items in her shop are tongue-in-cheek apparel, eye-catching signage, and stylish housewares, including this absolutely amazing, on-point throw pillow that says, "A woman's place is in the White House." I bet you didn't realize how empty your home felt until you met this pillow, am I right?

The site makes sure to emphasize that the pillow is "American made," describing the pillow as "the perfect touch for any home, whether it’s 1600 Pennsylvania Ave or simply Pennsylvania." Or any state, really! Another popular item in the store is this hilarious Everyday Pantsuit Tee, which lets you channel Hillary's famous polished politician look without actually having to wear a pantsuit.

But for those truly die-hard Hillary fans out there who want a more Hillary vibe around the house, you'll need to look beyond her online shop, which you've probably already bought out already. Here are some other equally magnificent Hillary housewares to spruce up your home in the lead-up to 2016 and beyond.

That Throw Pillow Though, $55

Here it is. Marvel at its glory and be inspired by its powerful gender message.

The message on this hand-stitched embroidery hoop is basically her unofficial slogan.

This candle introduces to the world "Saint Hillary."

What better way to show your spirit at your next BBQ or dinner party than with this Team Hillary apron?

Hang Hillary the Riveter on your wall for a daily dose of girl-power inspiration.

This handmade mug featuring a black-and-white image of Hillary should be your official coffee mug.

If your drink of choice is something harder, then this Hillary flask is for you. The best part is you can fill in the word bubble with whatever you want.

You can't settle for just one Hillary Clinton throw pillow. Add to your collection with this pillow, which features her portrait.

The Many Faces Of Hillary Magnet Set, $20

You know your refrigerator is screaming for this magnet set.

This Hillary mousepad would be perfect for your home office.

And for your official tea mug, may we suggest this '70s-style Hot For Hillary mug?