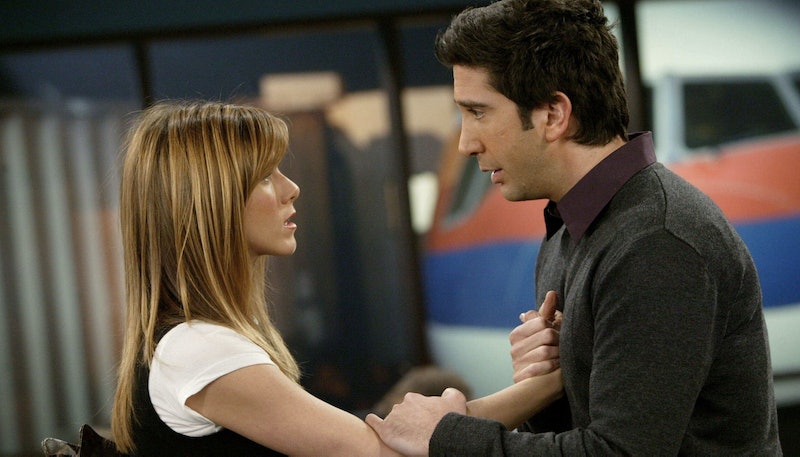 I may have only been seven years old when the first episode of Friends premiered, but that didn't prevent me from falling head over heels in love with this iconic Central Perk gang. These characters became my lobsters in every sense of the word. It wasn't enough that I wanted to be friends with them. I wanted to actually BE them. And, just like with any good obsession, my addiction has only grown stronger with time. So, naturally I have a lot of feelings about the series' huge season enders. While each and every episode is unique in its own right, it's hard to beat some of those game-changing Friends finales.

From Monica and Chandler's wedding to Ross saying Rachel's name at the altar, it's impossible to deny the sheer magnitude of legendary memories these finales managed to provide. However, that's not to say that all the finales were equally matched in their awesomeness. In fact, odds are that you already have a favorite Friends season finale that is near and dear to your heart. Believe me when I say that you are not alone. And, that's precisely why I've taken the liberty of ranking all 10 of the Friends finales from "eh" to "epic." Hey, every show has a few moo points.

For a series that produced some truly extraordinary cliffhangers, this finale was rather tame. Don't get me wrong, I love a spontaneous karaoke-type outbreak of "Copacabana" any day of the week, but for this to be the big end-of-the-season moment felt a little more calm than usual.

As a devout Ross & Rachel 'shipper, I always saw the Joey and Rachel 'ship as a road bump, so watching their big kiss was never going to be one of my favorite moments. I'm pretty sure the writers knew what was up. Still, I loved these two as roommates and adored their friendship as a whole.

We knew Ross and Rachel's love story wouldn't be easy, but that didn't stop hearts all over America from breaking when we saw him get off the plane with his new girlfriend, Julie. Isn't that just kick-you-in-the-crotch-spit-on-your-neck fantastic?

If I had a nickel for every time I accidentally thought one of my friends was proposing to me… Seriously, though, talk about unfortunate timing. Ross and Rachel were this close to getting back together, only to have it swiped away once more. BUT HE'S HER LOBSTER!

I mean, who doesn't love a good round of strip Happy Days game at the beach with some friends? Plus, this episode left viewers with the ever-looming question: Whose room did Ross go into?

If you weren't sobbing by the end of this episode then you might want to schedule a trip to the doctor's office ASAP, because clearly there's something wrong with your tear ducts. Seeing Monica and Chandler propose to each other was one of the sweetest moments on this show and further cemented their OTP status in TV couple history. Could I BE anymore emotional?

This episode was amazing in every sense of the word. (She got off the plane, guys!) But, I refuse to rank it any higher simply because it was just too depressing to see such a great show come to an end. I need more!

3. "The One With Monica And Chandler's Wedding" — Season 7

As if the wedding itself wasn't monumental enough, finding out that Rachel was the one who was pregnant was enough to completely exceed all my expectations and left all of us all with one very important question: Who's the father? But, of course, there was only one conceivable answer.

What's better than Monica and Chandler almost getting married? How about Ross and Rachel actually getting married while completely wasted? It's not the way I had pictured their wedding, but that didn't stop my jaw from instantly hitting the ground when they walked through those chapel doors screaming "Hello, Mrs. Ross!" and "Helloooooo, Mr. Rachel!"

I'm sure many of you may argue that this episode doesn't deserve top billing, but just hear me out: Not only did it renew fans' hope that Ross and Rachel would eventually get back together (he did say her name at the altar, after all), but it also introduced the idea of Monica and Chandler as a potential couple — a reveal that proved to be just as shocking. To quote Janice: "OH. MY. GOD."

Of course, there's no such thing as a bad Friends finale. So really, give me any episode on this list and I'm a happy camper.