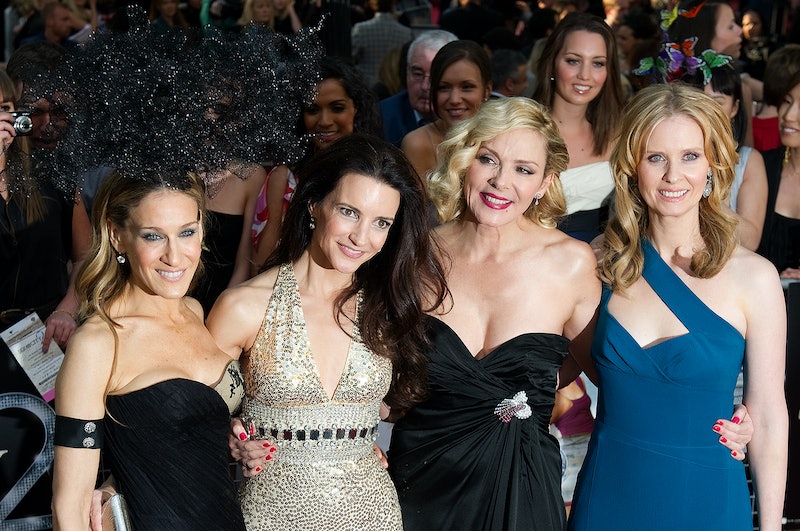 It has been five years since Sex and the City 2 came out. Have you recovered by now? Personally, my memories of the cultural event are fond, but only because of the enthusiastically, devastatingly critical reviews. While the film itself was a low point in cinema (among other things), it was clearly a brief golden age of film criticism. I still think about Lindy West's phenomenal review on an almost daily basis, in which she described it as "essentially a home video of gay men playing with giant Barbie dolls."

Sex and the City 2 seems more dated than any five-year-old film should be allowed to be, where shoe emergencies were a matter of utmost importance. Sex and the City creates a fictional universe in which a writer whose main talents are forced metaphors and bad puns can afford to have a designer shoe habit. While the show could be hilarious and intelligent, there are no genuinely funny jokes in Sex and the City 2. You can't even laugh at how bad it is, because so much of the dialogue is problematic and embarrassing and offensive. It's cringe-worthy, but not cringe humor. Here are some of the worst one-liners, from the cheesy to the outright offensive.

17. "When you married me you knew I was more Coco Chanel than Coq au Vin" — Carrie to Big

Classic Carrie wordplay. I love how often she elevates shopping as a legitimate lifestyle choice.

16. "Awkward times two!" — Tim Gunn on Miley Cyrus and Samantha showing up in the same dress

This is such a waste of Tim Gunn.

This is only funny because everyone who worked on this film wishes it was 1998 again.

What good is a foreign country if you can't make lots of puns about cultural differences?

13. "Not even five minutes into the vacation and I've already got a date." — Samantha on Middle Eastern fruits

Oh, Aidan, one doesn't have mirages. One sees mirages.

10. "It's a gay wedding. What's one more little bitch with an attitude?" — Samantha on bringing dogs to weddings

This is the worst offender of many, many gay jokes made at Stanford and Anthony's wedding.

Come on Samantha, you've been doing this for years. Is this the best you can do?

I wonder if the writers came up with this pun and then created character details to match.

7. "So your name is Dick Spurt?" — Samantha addressing Rikard Spurt

6. "There's a whole pool of testosterone from down under and I'm not feeling anything down under." — Samantha on the relatable scenario of seeing Australians in a swimming pool when she is too menopausal to feel aroused

Again, I feel that those men are Australian for the sake of this pun alone.

5. "I can't be in menopause and in coach!" — Samantha on sacrifices

Getting bumped from first class is the major low point of this movie.

This is sadly not the only pun they make about this situation.

3. "I am leading the way through the menopause maze." — Samantha on aging

Everyone has clearly given up on this movie.

Miranda, I expect so much more from you.

1. "Lawrence of my labia!" — Samantha on a hot guy in the desert

The screenwriters presumably started with this pun and worked their way back.