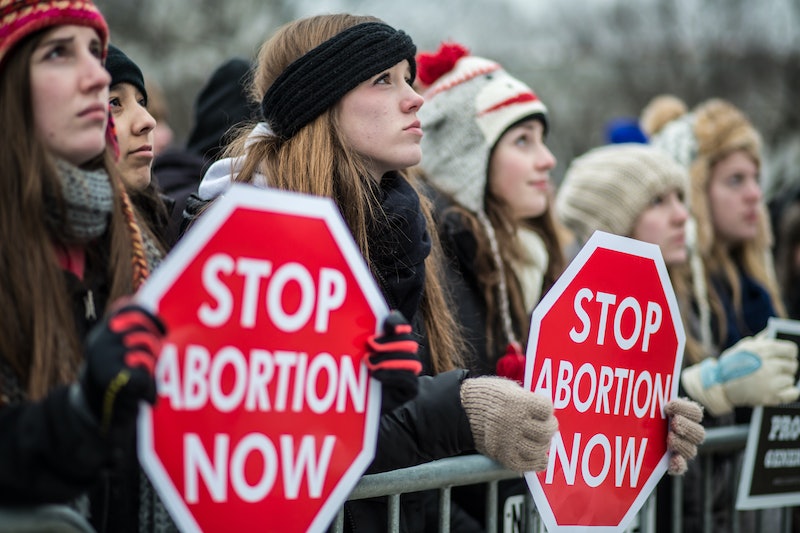 On Tuesday, West Virginia's contentious 20-week abortion ban officially takes effect, nearly three months after legislators in the state overrode the governor's veto for the first time in 30 years. Gov. Earl Ray Tomblin, an anti-abortion Democrat, attempted to block the bill, as he successfully did once before, because of its unconstitutionality. Yet lawmakers in the Republican-controlled legislature argue the law is not only constitutionally sound, but also scientifically accurate.

Drafted under the premise that fetuses begin to feel pain at or around 20 weeks of pregnancy, the new law bars abortions after 20 weeks "postfertilization," or 22 weeks of pregnancy dating from last menstrual period (doctors use the LMP method when dating and discussing pregnancy). There are narrow exceptions for when a woman's life or health is at risk, and for a non-viable fetus, but no exemptions are made for survivors of rape or incest.

Mental health, including risk of suicide or severe injury, also isn't covered by the medical exemption. The law states:

No condition may be deemed a medical emergency if based on a claim or diagnosis that the woman will engage in conduct which she intends to result in her death or in substantial and irreversible physical impairment of a major bodily function.

The lack of services for rape and incest victims, suicidal patients, or patients with complicated pregnancies who may need an abortion past the 20-week mark angered many health advocates at the time. Center for Reproductive Rights President Nancy Northup called the ban a "callous, cruel, and unconstitutional attack" on women's health care, while representatives for Planned Parenthood South Atlantic chastised West Virginia politicians for having a narrow-minded view on the realities many pregnant patients face in the second trimester.

"Planned Parenthood is deeply disappointed in the West Virginia Legislature’s complete disregard for the difficult real-world circumstances that women and their families face when a wanted pregnancy has gone tragically wrong," Melissa Reed of Planned Parenthood South Atlantic said at the time. "While a woman should not have to justify her personal medical decisions, the reality is that abortion later in pregnancy is extremely rare, and often happens in heartbreaking situations."

West Virginia joins 12 others states that currently outlaw abortion after either 20 weeks of pregnancy, 20 weeks postfertilization or 22 weeks of pregnancy (not all 20-week abortion bans are equal). According to research from the Guttmacher Institute, 11 of those 13 states have a ban in effect: Georgia's law is "only being enforced against postviability abortions," while Idaho seeing their laws enjoined due to pending litigation. Arizona's controversial 20-week ban, passed in 2012, was permanently enjoined by the U.S. Supreme Court in 2014.

Since 2010, when the first 20-week abortion ban was passed, the restriction has been steadily moving through state legislatures across the South and Midwest. During this latest current legislative session, 20-week bans have even made it to "pro-choice" Oregon and Illinois, as well as New Mexico, where a referendum proposing the ban in Albuquerque was defeated by voters in November 2013. In all, 12 states have introduced bills including 20-week abortion bans in the last five months.

But the West Virginia law particularly sparked debate after quotes from anti-abortion state legislators comparing women to refrigerators and romanticizing rape were publicized. Delegate Brian Kurcaba said that while rape is "awful," a rape or incest exemption wasn't needed because, "what is beautiful is the child that could come from this." Kurcaba later apologized for his remark, claiming he was misrepresented.