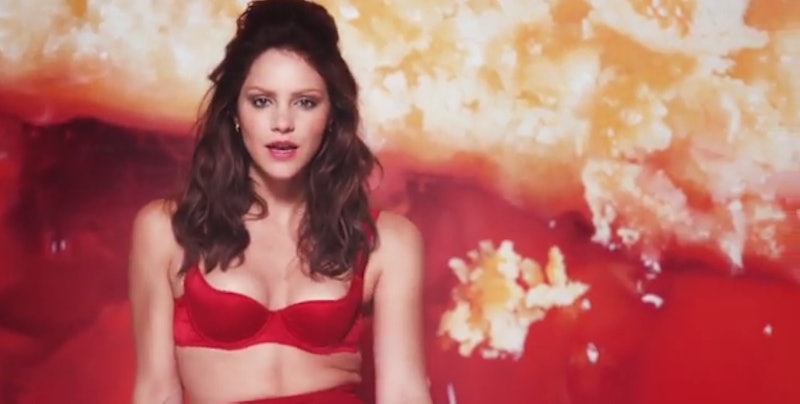 Well, here's a refreshing blast from the not-so-distant past. American Idol alum-turned-actress Katharine McPhee isn't exactly an ancient relic, but it has been quite a while since the 31-year-old dropped some new tunes. Luckily, she just released a sexy music video for McPhee's new single "Lick My Lips." While this cute, catchy song will definitely have fans applauding the end of her musical drought, they might find themselves drooling a little bit over the food-tastic lyrics and visuals.

Before I get into all the ways that this video is absolutely worth watching on repeat, here's a little background on the song. "Lick My Lips" was penned by Isabella Summers of Florence + the Machine and is rumored to be a single from McPhee's third album, which is reportedly set for a late 2015 release. If the album is half as satiating as McPhee's new single, then I absolutely cannot wait to savor every drop of it.

Now, I must warn you: however you choose to partake in viewing this video (sitting or standing, chair-dancing or full-on impromptu choreography), absolutely do not watch on an empty stomach. Aside from McPhee slinking around all sexy-like in the company of some pretty hot, shirtless guys and cute dancing girls, along with lyrics that are full of food analogies, the video also features some seriously yummy food (and folks snacking on that seriously yummy food). Basically, it's all in your face, like an irresistible platter waiting to be devoured.

So grab a plate (or at least a drink) and watch the 11 best moments from the "Lick My Lips" video.

Thanks a lot, McPhee. I don't even like pie and this scene is making me hungry.

McPhee Literally Hanging With The Fellas

Gotta give kudos to a girl who would risk a strained neck by balancing herself across a guy's shoulders. That along, with the three guys chewing gum and wearing stickers on their chests, makes this one of the video's best scenes.

Guy Preps For His Close-Up

The combing and the gum chewing are all apart of his master plan that is coming in 3, 2, 1...

This guy's a shameless camera hog — and McPhee loves it.

This Chick Eating a Hamburger

Whew, and she's seductively devouring a burger after dessert, no less. She's a total soldier with totally impressive digestive skills, which happen to be making me hungry all over again.

McPhee Playing With This Guy's Hair

Wait, wasn't he just combing it? Ah well, he doesn't seem to mind.

She's totally rockin' this Grease-era 'do, isn't she?

These Girls Doing Whatever They're Doing

I'm not entirely sure what's going on here, ladies, but it's strangely intriguing.

Dancing All Up on a Giant Comb

Um, where's hair-combing, side-eyeing guy? This scene was practically written for him.