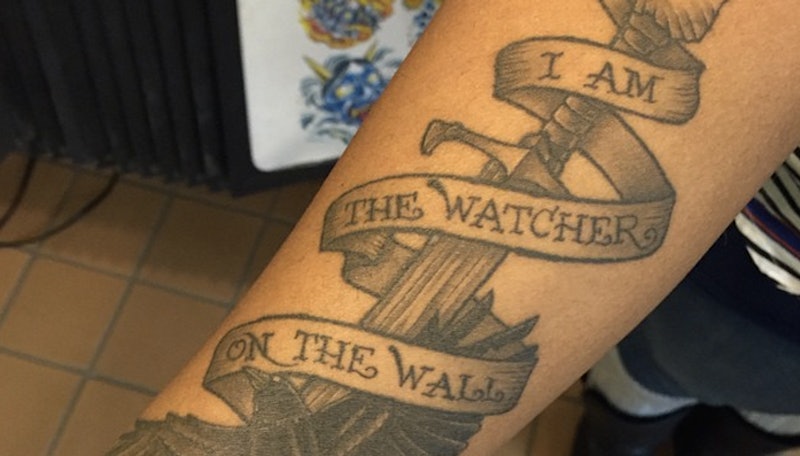 As the season five finale of Game of Thrones looms near, with just three remaining episodes before the June 15, 2015 wrap up, the only truth more apparent about the series than "Valar Morghulis," is that GoT fans are sincere in their undying devotion. True fanatics are gearing up for GoT finale parties and proving their valor with Game of Thrones tattoos. In fact, now that we're just a little over year out from the 20th anniversary of the publication of George R. R. Martin's first novel in the A Song of Ice and Fire series, the ranks of fans sporting GoT based tattoos have grown so vast that we're noticing the emergence of some very classically themed tributes.

It's really no wonder that the GoT series has us so captivated. According to a recent article on mic.com, the average episode of GoT costs HBO $6 million to produce, and has done wonders for the economies of the six countries in which it's filmed. That budget ranks GoT as one of the most expensive TV series in production, ever, and accounts for the gorgeous sets, breathtaking landscapes, intricate costuming, and violent dramatizations. Beyond visual marvels, the rich cast continues to prove its merits, and Martin's original plot is so densely packed that the exceptional writers in the GoT screenwriters room (Martin included) have much in the way of thrilling content to cover and re-imagine.

With a wealth of intriguing theories about the characters in GoT peppering the web, now seems a pretty ideal time to pay tribute to your love of the series, proudly declaring in ink who you envision might lay claim to the Iron Throne. However, if you're not willing to commit quite yet to that outcome, there are still a wide variety of ways to honor the Westerosi or Essosi bloodlines and banners with which you feel most akin. From quotes hailing from the original literary roots of the novels, to imagery from the rich tapestry of graphics created for the HBO series, you're bound to find plenty of inspiration for your next GoT inking in this list of timeless GoT tattoos.

In a world where the TV trope Anyone Can Die rings startlingly true, Valar Morghulis seems one of the most fitting quotes one could pull from the GoT series for a tattoo. Especially when balanced by its counterpart, Valar Dohaeris, or, "All men must serve."

Mixing the iconography of ravens and the iron from the Iron Throne, these epic back and chest tattoos have become a standard in the realm of GoT inspired ink.

3. The Honor Of The Hand

To be the Hand of the King is both an honor and a curse. Celebrate the fate, tragic or triumphant, of your favorite hand with this classic Ed Hardy style tattoo.

Little inspires more intrigue and terror in Westeros than whispers of dragons, and the rebirth of the Targaryen legacy.

Easily one of the most loved characters in GoT is Daenerys Targaryen, which is no surprise. She is, after all, an empowered, independent young woman, and the Mother of Dragons. From beautiful, lifelike portraits, to adorable pinups, Daenerys could just be the most inked GoT character.

These sweet giants stole our collective hearts early in the first season of GoT as the Stark family sigil made its first appearance south of The Wall in years. From geometric recreations, to realistically majestic and painterly renditions, these wolves are becoming a cult classic in the way of ink.

As the various houses of Westeros wed and form new alliances, fans find new reasons to get tatted up.

Some of the characters in GoT represent the deep rift between aristocracy and the struggle of the masses. And while Sandor Clegane, better known as The Hound, held a spot on the Kingsguard, his contempt for royalty was palpable.

Winter is coming. Probably the most terrifying aspect of GoT is impending doom, courtesy of the White Walkers. Although I don't personally revel in the idea of waking up to this guy on my skin, he certainly makes for a genuinely badass tattoo, one many an ink enthusiast would be proud to carry.

Has your honor been questionable? Were you born into unsavory circumstance? Perhaps it's time you took the black.

Reminiscent of the beauty of Quenya, one of the Elven dialects from Lord of the Rings, this Dothraki tattoo beautifully depicts one of the more charming quotes from GoT, "Moon of my life."

Since GoT is so packed with sigils, iconic imagery, and wild mythology, the series lends itself well to epic, sweeping pieces.

Dragon glass is vicious, especially in small form. Much like Arya Stark, our favorite pint-sized heroine.

Of course, what tattoo collection would be complete without a Lego listing? GoT fans, rejoice. The Lego/GoT marriage makes its way onto your skin in stunning artistry, and breathtaking color.