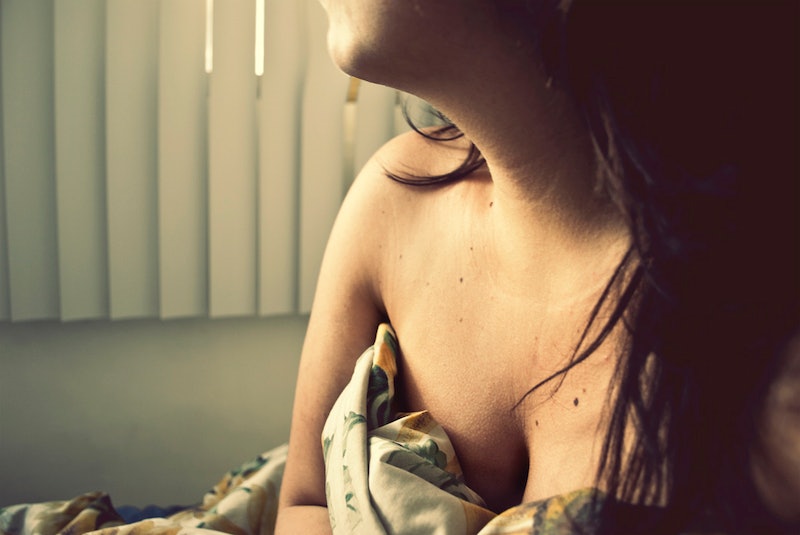 I'm romantically challenged, to put it nicely. It just doesn't come naturally to me. I'm completely baffled by flowers and candles lead to fire, and if I like you, then you probably make me nervous, and when I'm nervous, I'm mean to you, like a 6 year-old pulling pigtails. So cuddling after sex is a minefield. Not the cuddling, actually; I love touching. But you've just finished sex, and now there's this silence, this space, that some people seem to relax into. I am not those people. And I’m not the only one.

Yes, I may do some weird things, like immediately start to make jokes about the fact that neither of us enjoyed it (what could be more endearing?), put on YouTube videos of little kids getting hurt on tricycles, or refer to whatever just happened as some kind of Aristotelian catharsis for the neighbors who overheard our sex and surely experienced a mixture of pity for us, but fear that they might become us. (I have done all of these things more than once...) So I’ve said some weird things. But I’ve also been on the receiving end of some post-sex zingers.

Here’s a look at the 8 most awkward things to say (or hear) after sex:

Don't let the simplicity fool you — this can be the most awkward of all of the awkwards. When it goes so badly neither of you know what to say. And it just hangs in the air while you both studiously stare at the wall paper.

Yes, it's 3 a.m. But you know what's worse than a middle of the night, half-awake, journey home? Spending any more time with you.

Fun fact: I once hooked up with a friend of mine who not only said he was going to leave at 4:30 in the morning, he asked me to TFL his way home for him. You know what's worse than someone leaving in the middle of the night? Needing you to explain to them the most efficient way to flee you, knowing that the 4-hour journey and 3 bus switches is better than cuddling.

SOMEONE ONCE TOLD ME THIS WHILE HIS PENIS WAS STILL IN MY MOUTH. I don't care if that doesn't count as post-sex, it deserves to be included.

Perhaps my most hilarious after sex conversation was after a first time with a new guy and it had been really rough sex, especially for the first encounter. I had gone along with it, because it was fun, even though it wasn't my normal thing. But when I said, "I didn't realize you were into that," he immediately replied, "What? You mean I didn't realize you were into that..." Basically, we had both been following each other's leads, thinking the other one was into it, and it led us into some pretty weird shit. We spent about five minutes burying our heads in our hands giggling awkward when we realized what we had done... dear god, what had we done?

Do not ask this. Do not ever ask this. If you couldn't tell during, you're not going to like the answer after.

Awkward, but often necessary. It all seemed fun and sexy in the heat of the moment, but now that moment is over and things are just sticky and uncomfortable and it's time for cleanup.

Maybe I've lived in England too long, but just stop apologizing! I don't care if you finished quickly, or couldn't get there at all, it's fine.

More like this
The Best Time To Date After A Breakup, According To Experts
By Bustle Editors
7 Women Share Their Best Orgasm Stories
By Lexi Inks
Hinge's New NFAQ Feature Is Demystifying Queer Dating
By Emma Carey
Are Virgo & Aquarius Compatible In A Relationship?
By Kristine Fellizar
Get Even More From Bustle — Sign Up For The Newsletter