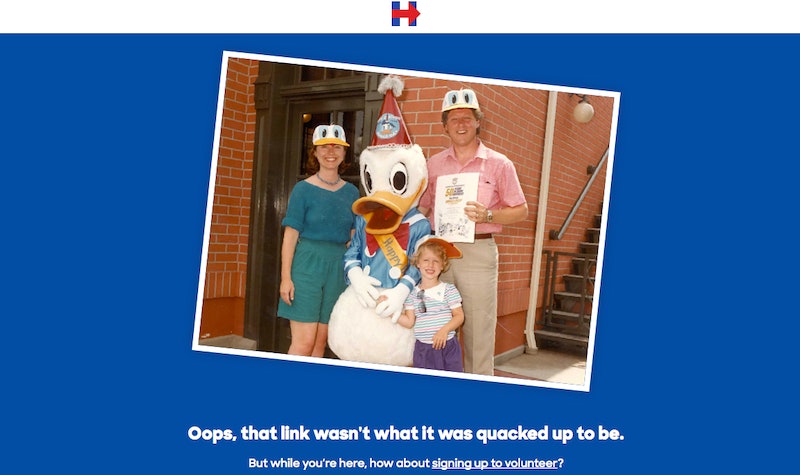 The 2016 presidential race continues to heat up each day as America braces for more campaign announcements. In the coming weeks, we can expect announcements from Louisiana Governor Bobby Jindal, South Carolina Senator Lindsey Graham, former New York Governor George Pataki, and former Maryland Governor Martin O'Malley. But alongside the race to the Republican and Democratic primaries is an even more fierce competition between the candidates — one that asks, "Which 2016 candidate has the best 404 error page?" That's right. If you want to cut it as U.S. president, then you better have one catchy 404 error page.

Those who are qualified to run our country should know the importance of a 404 error page. Not only is it functional — it lets the site visitor know that the particular page you were looking for couldn't be found on the server — but it's also something of a blank canvas that you can customize and tinker with however you want. Some websites have gotten really creative with their 404 pages, and many of the 2016 presidential candidates have followed suit.

Who's ahead of the 404 race right now? According to Slate, Hillary Clinton is the early leader in the 404 primary race, but just like the actual race that could easily change. Take a look at the 2016 presidential candidates' 404 error pages and decide for yourself who, based on the creativity levels, really deserves to be commander-in-chief.

Hillary Clinton's 404 page is simple, nostalgic, personal, and puntastic. It features a family photo of Bill, Hillary, and Chelsea with Donald Duck with the caption, "Oops, that link wasn't what it was quacked up to be."

Hillary's got some pretty stiff competition from fellow Democratic candidate Bernie Sanders, whose 404 page features a video message from the senator. He tells the visitor:

First of all, "scoot down"? That's adorable. He sounds like your grandpa telling you to just put some ointment on it and it'll be fine. Secondly, the bottom of the page does have an index to redirect you back to the campaign site, which is functionally brilliant.

Oh dear. Marco Rubio might have taken his 404 page a little too far. He uses a football analogy to let visitors know that they've "fumbled," which is fine, but then there's a nearly minute-and-a-half-long video about Rubio as a kids football coach. It's meant to show how he's learned important life lessons from teaching kids sports... but what does that have to finding the right web page?

Mike Huckabee's 404 error page is just meh. It's similar to Clinton's in that it uses a personal photo of Huckabee to show the more human side of him — he's fishing with his dog — and it also uses a pun — "Oops! Looks like you caught the wrong page." But I'd give this a solid B for "better than nothing."

One word: boring! Republican candidate Ben Carson didn't even try to make his 404 page stand out. If one's 404 page is reflective of his presidential campaign, then he might as well throw in the towel now.

Perhaps the worst 404 page of the bunch belongs to Carly Fiorina. Why? Hers does not even let the visitor know that they've reached a 404 error page; it just asks for donations. Really, Carly? Not only is that not helpful for website navigation at all, but it's also a super aggressive fundraising tactic.

As for Rand Paul and Ted Cruz, they don't seem to even have 404 pages, so they might as well not be in the race at all.