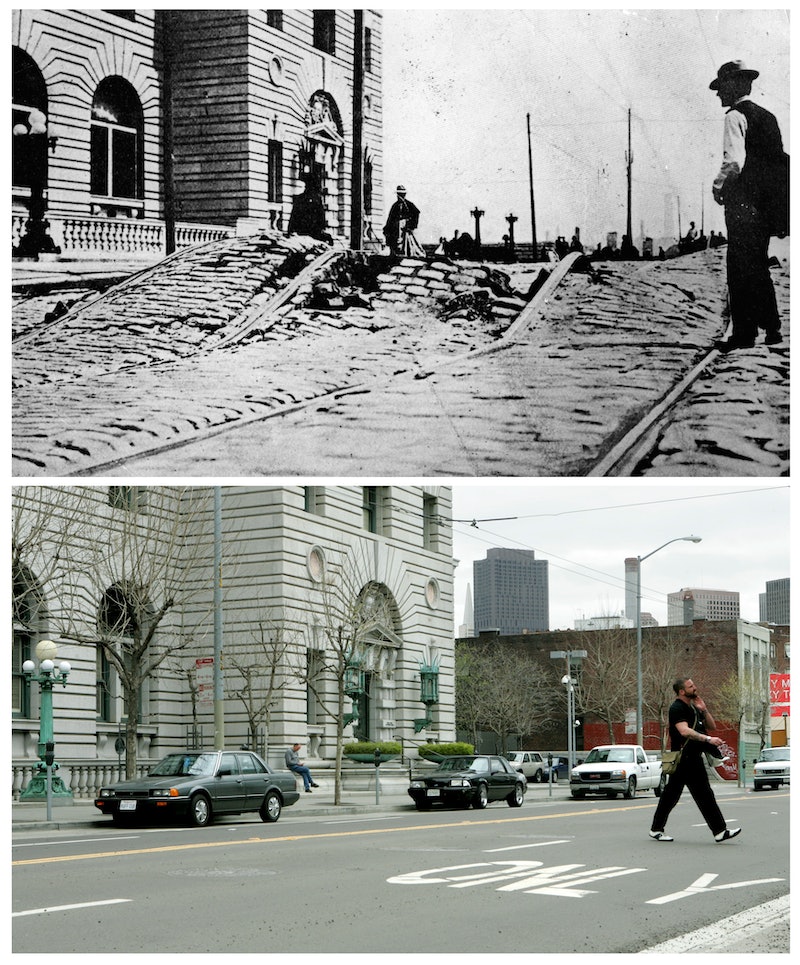 According to the University of California, Berkeley's Seismological Laboratory, the Great Earthquake of San Francisco measured at a magnitude between 7.7 and 7.9. The earthquake that hit Nepal last month was registered by the U.S. Geological Survey as a 7.8 on the Richter scale, but that might not be a fair comparison. USGS notes that scientists often disagree on magnitudes for older earthquakes, due to the poor quality of older data.

The disaster in San Francisco left more than 3,000 people dead and more than a quarter-million homeless, according to The New York Times. The earthquake's 5 a.m. timing led to people crowding the streets of San Francisco still in "their night attire," reported The Times on April 19, the day after the earthquake. Much like in present-day Haiti, people were forced to live in tents in unsanitary conditions, which led to a great bubonic plague outbreak in 1907.

The effects of the earthquake were debilitating. According to The Times, San Francisco prior to the April 18 earthquake was the largest city in the American West. The earthquake led to a shift in population and resources to Los Angeles, leading LA to become the West's most populated city by 1920. Here's a look at what a real, devastating earthquake on the San Andreas fault looked like.

Refugees camped out in rows of tents at California's Golden Gate Park. According to the National Park Service, an estimated 250,000 San Franciscans that were left homeless in the earthquake's aftermath camped out in park areas and burned out buildings, or turned to tent camps run by the US Army.

According to the Museum of the City of San Francisco, the refugee camp above is now the site of the University of California Medical Center at Parnassus Heights.

The buildings along Market Street, which makes up San Francisco's downtown, suffered a great deal of damage.

An anonymous traveler in 1906 shot film footage of Market Street on a San Francisco cable car just days before the earthquake hit.

According to The San Francisco Gate, San Francisco's City Hall building was the largest municipal building west of Chicago and was so elaborate it took 25 years to build. City Hall was supposed to be "earthquake-proof," but shattered within seconds after the earthquake hit. A new City Hall for San Francisco wasn't built until 1915, after a state-wide design contest. The 1989 Loma Prieta earthquake later caused an estimated $300 million worth of damage to the new City Hall.

The earthquake left many of San Francisco's iconic houses in disarray, including frame houses that tumbled from their foundations after the earthquake hit.

The Palace Hotel on Market Street was famous for hosting political gatherings and high society galas. According to the now re-built hotel's website, the fire that came after the San Francisco earthquake did the most damage to the Palace Hotel.

The flames reached the hotel in the early afternoon. By night, "the magnificent world famous structure was reduced to a burned out shell," according to the hotel website.

Bert L. Smith, who was a guest at the Palace Hotel during the time of the earthquake, was interviewed by the US Geological Survey in 1977. Smith told the USGS:

I recall the discussions about if the Palace would burn and when it would burn. As you know, it survived the earthquake rather well, but it burned down later as the fire swept through the city. The answer from the hotel manager was that despite the very latest fire-prevention measures in the hotel, he thought it was probably going to burn. Perhaps because of this he gave us all our room keys as mementos.

Both the Fairmont Hotel and the Merchant's Exchange remained upright after the earthquake.

According to NPR, city leaders pushed to relocate Chinatown to a less desirable part of the city after the earthquake. But the Chinese fought back and lobbied to have buildings in the neighborhood rebuilt to look like traditional Chinese buildings, in order to attract tourists.

The famous Chicago photographer George R. Lawrence took panoramic photos of the ruins in his Lawrence Captive Airship, according to Chicago Magazine.

According to NOAA, the three-day fire following the earthquake did more damage than the earthquake itself. San Francisco lost more than 28,000 buildings, most of which were made of wood.

According to the University of Buffalo, around 90 percent of San Francisco's buildings in 1906 were constructed with wooden frames. Only 54 were fireproof.

According to The San Francisco Gate, the city's businesses were eager to get back to business after the earthquake. Many buildings that rose in the aftermath, such as on Kearney Street, are still around today.