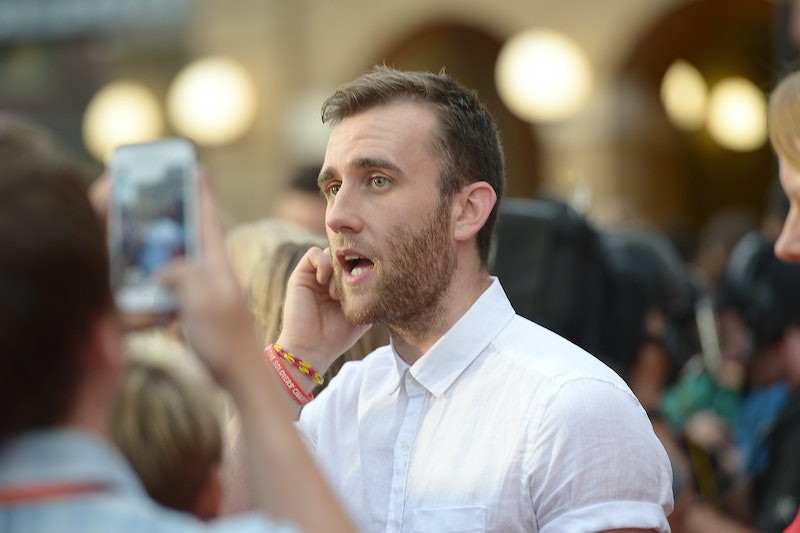 Remember when Nick Jonas posed shirtless in Flaunt Magazine and essentially threw his Disney reputation and virginal past into the dust? Whatever means he needed to prove that he was a grown man seemed to really work. And now, Harry Potter star Matthew Lewis has done the human population the good service of following in Jonas' foot steps. The only person who seemed to mind Neville Longbottom's tanned torso out in full view was, rightfully, J.K. Rowling, because she watched him grow up — unlike many of us, in person, rather than on screen — and the character he played is like her child. So yeah... that has to have been a little awkward.

Since his days on the Harry Potter set, Lewis has go on to star as a British soldier in the television series, Bluestone 42. As shocking as his transformation might seem to some who haven't been following his career post-Potter, the actor is indeed a very grown 25-year-old man who has been seducing us all long before this infamous photo shoot.

How, you might ask? Well, my friends, Lewis has been dropping hints of his upcoming reveal as smoldering shirtless model for the past few years, so lo and behold: all of the times Matthew Lewis has tried to seduce you and, now, succeeded in making fans drool around the world.

1. When He Brooded In The Corner

Tom Felton and Rupert Grint were smiling while Matthew Lewis licked his lips, oh so seductively.

2. When He Posed With A Massive Python

Because isn't that what all rich playboys do?

3. When He Went Straight To The Point

I mean, there is no denying where he wants to divert your eyes.

4. When He Was A Socially Conscious Bae

He was supporting children's food education and he wanted you to join him and his beanie in signing the petition.

5. When He Danced Shirtless With His Co-Stars

Words... I have none. Except, where's Daniel Radcliffe?

6. When He Supported His Favorite Rugby Team

Because any man looks hotter in a sports jersey. And there is a cute bunny on it as an added bonus.

7. When He Used The Power Of The Eyebrow

Look at that subtle movement. So talented, so mysterious.

8. When He Said This

So maaaaybe he didn't really say this and it was just a fan's wishful thinking, but I'm sure this is what he was thinking. He was obviously ready to let his sexy run free in the world and he has done just that.