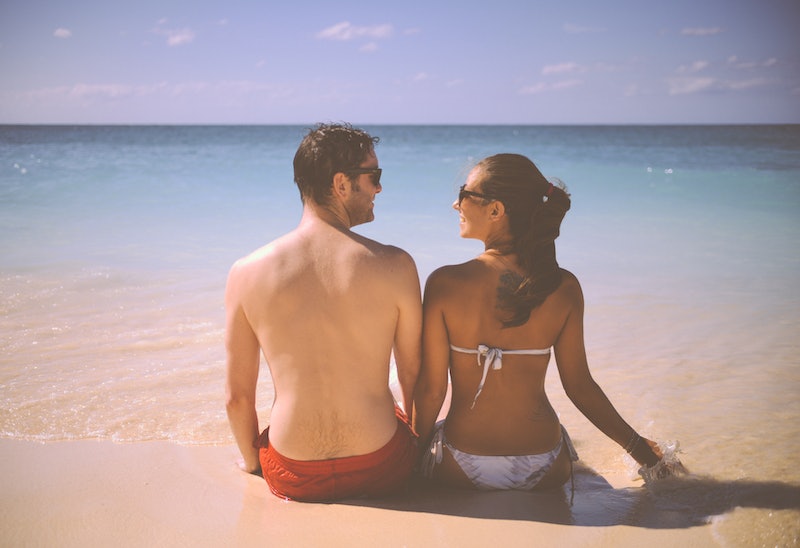 If human beings were unable to experience the beautiful and all-consuming sensation known as falling in love, we would have never created some of the world's most powerful music, art, literature, or film. We would also be missing out on one of the most profound facets of human existence. Falling in love is confusing, scary, funny, and life-changing all at the same time. While many of the physical effects of being in love may be unique to you, scientists have been able to pinpoint neurological and physical explanations for some of the most common symptoms known to the lovesick: racing heartbeats, nervousness, obsessive focus, etc.Dr. Helen Fisher, biological anthropologist and author of Why We Love?, breaks the process of falling in love into three different stages: lust, attraction, and attachment. The body reacts in specific ways during each stage based on brain chemistry and the release of various hormones. Your body's physical response throughout these stages also depends on whether you are happy or dissatisfied in the romantic relationship. Your willingness to continue or break off the relationship is also influenced by these neurological factors.Many aspects of love will always be a mystery to us, but there are universal effects that falling in love has on many people's physical beings. Here are eight things that happen to your body when you fall in love:

Falling in love activates areas in the brain that scientists have also found activated in the brains of cocaine addicts. In a 2010 Syracuse University study published in the Journal of Sexual Medicine, Stephanie Ortigue and her team of researchers observed the brains of subjects while they looked at photographs of their romantic partners. Researchers found that the dopaminergic subcortical system in the subjects' brains lit up (which is the neurological region also activated in cocaine addicts). When this area and other areas of the brain start working, they “release euphoria-inducing chemicals” — hormones including dopamine, oxytocin, adrenaline, and vasopressin. Oxytocin is also known as “the love hormone” because it's what causes that warm and fuzzy feeling, and vasopressin can cause “aggression and territorial behavior.” So that's why falling in love feels so wonderful, and why you'll lose it if someone tries to make moves on your boo.

2. You get sweaty palms and a fluttering heart.

There is increased blood flow to the brain's pleasure center when you develop an attraction to someone new, and the adrenaline and norepinephrine hormones are released into your body. Those two hormones contribute to the sweaty palms and heart-skipping-a-beat thing that you experience in those first magic moments. Adrenaline and norepinephrine also lead to feelings of “elation, craving, and focused attention.” This explains the one-track mind you often adopt at the beginning of a courtship, unable to think about anything besides that cutie you met at your friend's party the other night.

3. Butterflies in your stomach, for real.

The sensation that we call “butterflies in our stomach” is based in reality. Falling in love releases oxytocin, creating feelings of happiness, but it also releases cortisol, or “the stress hormone.” Romance is emotional, confusing, and stressful. (But what did he ~really~ mean when he texted me back with “OK”??!!, etc.) When that stress hormone is released, it “contracts the blood vessels around your gut,” which then leads to nausea. Yay, love is the best!

4. Your lover can help calm the stress, though.

The good news is that once you and your dream lover start kissing, some of that stress will be reduced! When you kiss, your body releases feel-good endorphins and dopamine.

5. You become obsessed with your love interest.

Donatella Marazziti, Professor of Psychiatry and Director of the Laboratory of Psychopharmacology at the University of Pisa, discovered that people at the beginning of a new romance produce less serotonin in their brains. There are also diminished serotonin levels in the brains of those who have Obsessive Compulsive Disorder. As explained in mental_floss, “Since both conditions (to different extents) also give rise to feelings of anxiety and obtrusive thinking, it is tempting to think of early love as a mild, temporary form of obsessive behavior.” However, your relationship alone shouldn't cause you to feel anxious and obsessive forever, since serotonin and the aforementioned stress hormone return to previous levels after one year to a year and a half of dating.

6. There's a reason your crush got you lookin' so crazy right now.

We've talked about which regions of the brain become hyperactive when finding that special someone, but which parts of the brain deactivate? Semir Zeki of University College London and, again, Dr. Helen Fisher from Rutgers University's Department of Anthropology utilized MRI scans to observe the brains of smitten persons, and what they discovered provides insight into why love makes us act so damn foolish. The amygdala and frontal and prefrontal cortecies demonstrated diminished activity, and it just so happens those are the neurological regions “associated with fear, ...learning from one's mistakes, ...analysis and judgement, delayed gratification, and predicting the outcomes of events.” If the areas of our brains responsible for these critical thinking abilities aren't fully functioning, is it any wonder that many of us make the same mistakes over and over again in love? Or that we just can't help falling for scrubs, no matter what Lisa “Left Eye” Lopes tried to tell us? It's awful to look back on past courtships only to ask yourself, “What the hell was I thinking?!” But at least you'll know that your erratic behavior wasn't entirely your fault. Your body BETRAYED you, after all. Ugh, this is some of that “love is blind” bullsh*t.

When you stare at the one you romantically desire, your pupils dilate. All of the excitement and nervousness leads to "stimulation of the autonomic nervous system's sympathetic branch," causing pupils to grow in size.

8. ~Love conquers all~ (or at least helps your headaches)

Since the increased levels of oxytocin in your system reduce stress, romance may lessen the frequency of headaches and migraines! In 2010, the Stanford University School of Medicine researched the success of oxytocin therapy, studying subjects who suffered from chronic daily headaches (often including terrible migraines). The researchers gave the study participants, who had not been able to achieve relief from any other treatment, a nasal spray consisting of a dose of oxytocin. The results were quite impressive: 50 percent reported their headache pain as cut in half after four hours, while 27 percent reported feeling no pain after four hours. See, all of the butterflies, nervousness, and anxiety are totally worth it in the end!

More like this
The Top Mistakes Scorpios Make In Relationships (& How To Avoid Them)
By Nina Kahn
Are Leo & Capricorn A Good Match?
By Kristine Fellizar
The 12 Best Air Fresheners For Bathroom Smells
By Amber Petty
The 10 Best Doormats For Cleaning Shoes
By Ileana Morales Valentine
Get Even More From Bustle — Sign Up For The Newsletter