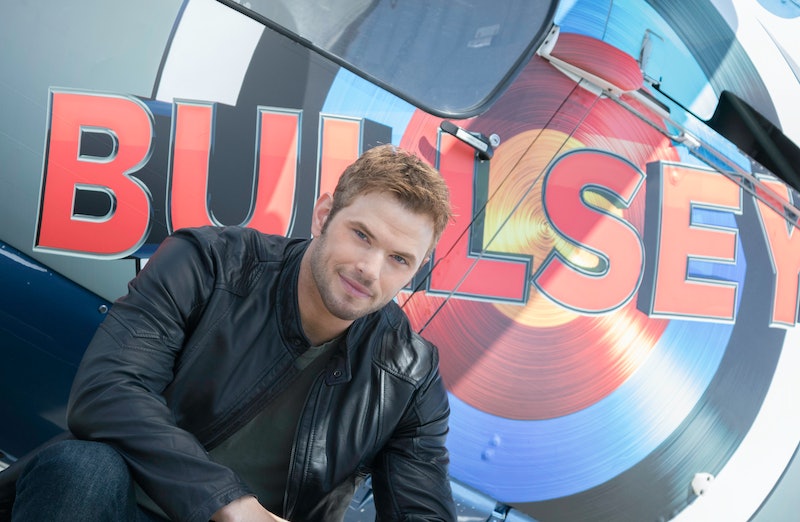 Summer is here and reality TV shows are heating up! If you’ve been looking for something fun and fluffy to fill your viewing schedule until the scripted dramas return, I’ve got a new show for you: Bullseye on Fox. It’s a reality-challenge show where four men and four women get put through the physical and mental wringer all with one goal. Yep, you guessed it: hitting the bullseye. Basically, everyone is turned into human darts (don’t overthink it). It’s pure action which makes for the best kind of summer fun. It’s like Fear Factor meets The Amazing Race, and serves as a welcome break from all of the singing shows that have dominated reality TV for so long. At the helm of the mayhem are Bullseye hosts Kellan Lutz and Godfrey (only one name needed), the new co-hosts with the most (Mostest? They’re great, is what I am going for).

At first they seem like a mismatched pair — Lutz is best known as Emmett from the Twilight saga and Godfrey is a well known comedian — but the two of them combined actually make for excellent television. Here are the seven reasons why Kellan Lutz and Godfrey are a perfect match for hosting Bullseye.

Anyone who has ever seen The Godfrey Complex knows that he’ll bring the humor. But Godfrey isn’t the only funny man around. Does anyone else remember Lutz's turn on 30 Rock? Or his stint on The Comeback? Surprisingly funny!

Not Bad To Look At

It might be obvious but it has to be said: they are both gorgeous. Not a bad way to spend an hour.

Looks aside, they are both up for the action that Bullseye brings. Lutz is a self-described adrenaline junkie, as he says in the video above, so don't be surprised if you see him doing some of the stunts.

Based on previews, it seems like Godfrey is going to be the levity and humor in the midst of all the target-practice-action, and I wouldn't have it any other way.

Check out the preview above and you'll see that Lutz and Godfrey are having a blast together, goofing around and trying out the stunts. They might seem like an odd couple, but I think we are in for a pleasant surprise with these two.

More like this
What’s New On Netflix: Lana Condor’s Ghostly Comedy & A Sexy Reality Series
By Arya Roshanian
Here’s Everything Coming To & Leaving Netflix In July
By Grace Wehniainen
Paramount+ Wants To Take Over Your Netflix
By Sophie McEvoy
What’s New On Netflix: The Return Of 'The Umbrella Academy'
By Arya Roshanian
Get Even More From Bustle — Sign Up For The Newsletter