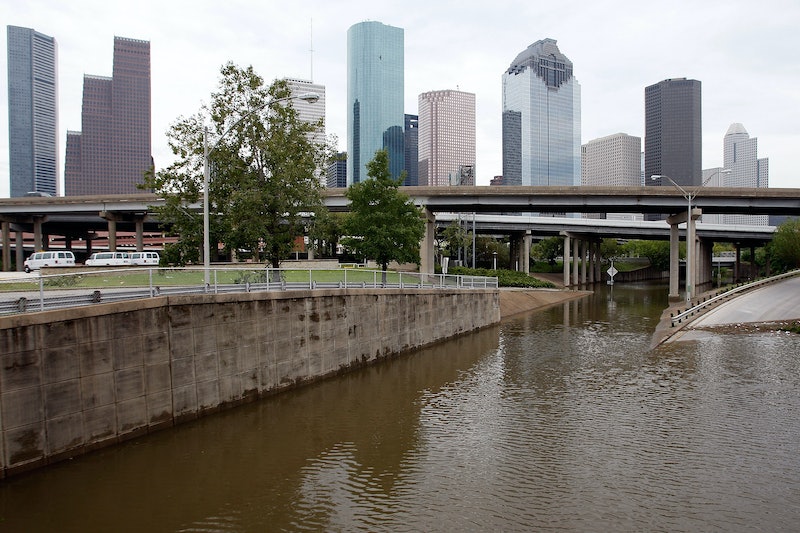 The situation in central Texas is still extremely serious, with flooding continuing to ravage the Houston area on Tuesday, The New York Times reported. Streets and buildings in the region were drenched for yet another day, with abandoned cars left along major roadways, and the death toll and number of people missing continuing to climb. This is on top of widespread storms and flooding across Texas and Oklahoma over the holiday weekend, including flash floods that left hundreds stranded. It's hard to watch these scenes of devastation, and most of us want to help the Texas flood victims. But where do you even start?

It's hard to get around the city at this point, as Houston's school district remained closed Tuesday, and the city Metro suspended bus and rail service. Officials were even warning people not to try to drive, because rescue resources were already stretched to the max. Once the floodwaters begin to recede, the affected cities are facing a massive cleanup, and many residents are going to need help both with rebuilding and with day-to-day needs. Federal Emergency Management Agency (FEMA) personnel are already in the Houston area, USA Today reported, and President Obama has pledged federal assistance will be provided.

While it's not safe yet for well-meaning people to venture into the area to try to help, there are several relief agencies stepping up in Texas and Oklahoma to help get assistance to those in need.

The American Red Cross of Central Texas is accepting donations in person, by phone call, or via text message by texting REDCROSS to 90999. In addition to seeking volunteers, The Salvation Army can take your donation via its website, mail, or if you send the text message HELPAUSTINAREA to 41444. The city of Austin is just outside the hardest-hit areas in Hays County, but has seen its share of flooding as well. The Salvation Army says monetary donations, rather than donated goods, are all it can accept at this point. The Hays County Food Bank in San Marcos has set up several drop-off points for donations, and can also accept monetary donations via its website. Donations can also be made to the Houston Food Bank on its website.

Donate To This GoFundMe

Hays County has been receiving messages of support via social media using the hashtag #HelpHayes. A GofundMe page started by television station KVUE aiming to raise $10,000 has already surpassed its goal, and it's still accepting donations. According to the GoFundMe page, all of the proceeds will stay in Hays County for victims of the flooding.

Volunteer (If You're In The Area)

in the central Texas area, there are plenty of places that would be glad to have volunteers, KVUE reports. Serve San Marcos needs people to help with clean up efforts, and to provide additional cleaning supplies, such as work gloves, mops, and rakes. And the Hays Consolidated Independent School District has compiled a still-growing list of smaller relief needs.

As the situation in Texas continues to unfold, the best thing most of us can do is spread awareness about ways to help. Even small donations can add up, and every little bit helps. Use the hashtag #HelpHays, and post links to your Facebook page that have the most updated details.