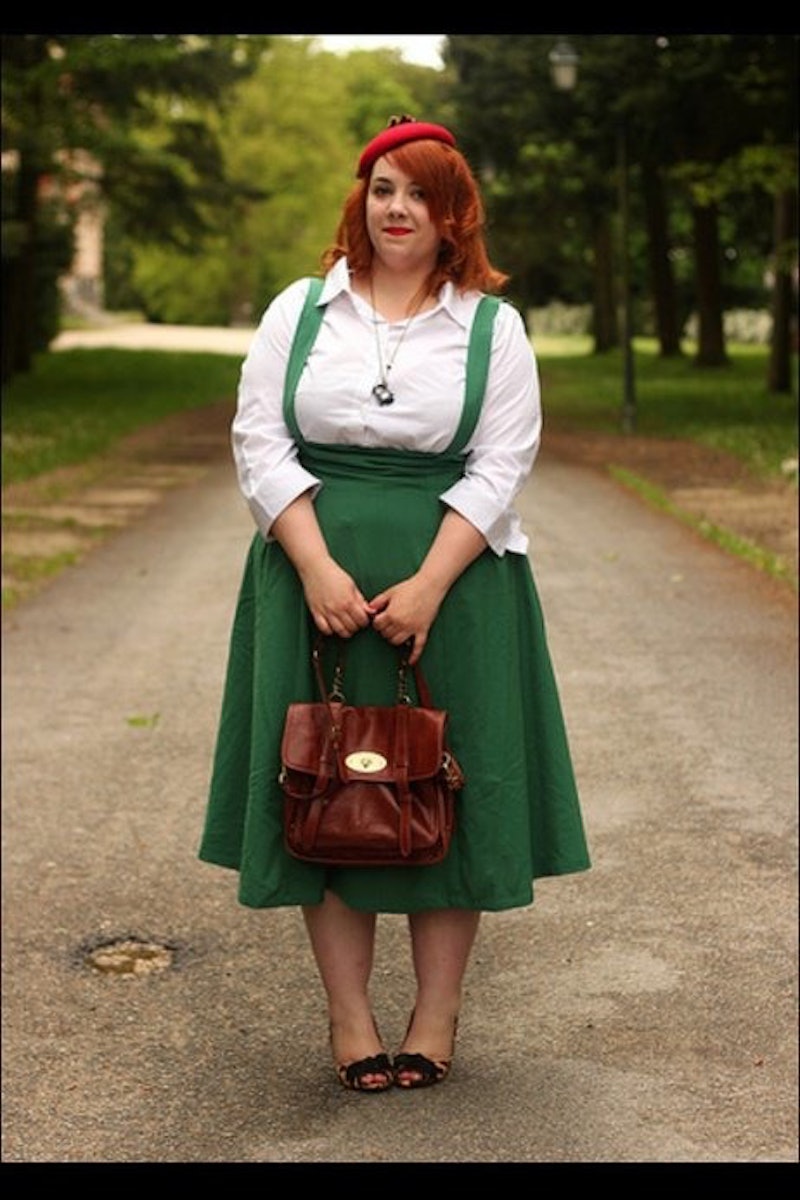 Depending upon where you're located in the world, your understanding of what a jumper is may be vastly different from the United States definition of a jumper. Contrary to our United Kingdom and Aussie friends, on this side of the pond, when someone mentions a jumper, what comes to mind are typically visions of youthful dresses sporting pinafore-style tops, often worn with a blouse or an under shirt.

They're cute, they're playful, and they're most certainly not sweaters (which is what a jumper signifies these days in the United Kingdom — over there, our jumpers are known as pinafore dresses). So, to further clear up any confusion, and to pay quick tribute to their versatility, let's embark upon a brief journey through the history of the jumper (dress).

Although the dependable little jumper hasn't had a substantial amount of time in the fashion limelight, this function friendly dress has been a subtle staple for the past century, with its roots potentially dating back to inspiration from the women's sideless surcoats of the 14th century. The two share some striking similarities in that they're both meant to be worn over another garment, they feature the effect of having or actually having shoulder straps, and their skirts both traditionally fell in loose folds from the hips (although the skirts of jumpers have generally been much shorter over the years).

According to The Greenwood Encyclopedia of Clothing Through World History: Prehistory to 1500CE, the sideless surcoat evolved into being exclusively associated with royalty, but unfortunately, that significance hasn't followed through with the jumper. However, nothing's stopping you from wearing one and proclaiming yourself queen for the day!

While the exact origins of the jumper as we now know it here in the United States tend to be a little vague, we do know it first became popularized through sportswear created by Jean Patou, Coco Chanel, and Paul Poiret. These practical ensembles liberated women (and men) from their more cumbersome predecessors, and began in the form (for women) of short skirts and sleeveless jumper blouses. Patou famously showcased the look with the help of flirty, flamboyant, and extremely skilled Suzanne Lenglen, a 1920s champion tennis player from France.

To pinpoint a more specific debut is difficult, although according to worldwidewords.org, the Oxford English Dictionary apparently makes reference to a catalogue from 1908 that discusses a loose-fitting blouse worn over a skirt, and there seems to be a Sears, Roebuck catalogue from 1916 that coins the term jumper frock to describe a pinafore style dress worn over a blouse or shirt.

Here there is also some ironing out of the terminology behind jumper, which has little to do with the English verb, jump, and may have originated from the French juppe, a petticoat, a word derived from the Arabic word jubba, meaning a loose outer garment. Phew, that felt like a bit of a jump down a rabbit's hole, didn't it?

So, how did the sporty jumper evolve into the fashion forward little numbers that models in the '60s, such as Lesley Lawson (better known as Twiggy), made popular? Well, as it turns out, much of the jumper's success comes from its wide variety of cuts, and functionality. The jumper has presented itself in a myriad of shapes, including jumper shorts, jumper suits, and jumper dresses with differing hemlines, necklines, and degrees of pleating. The pinafore style has been recognizable for decades as a common school uniform for adolescent girls. The knee length dresses provide maneuverability, and their classic blouse-inclusive design provides a level of coverage that many parents find comforting. But what about grown women? How did the jumper manage to keep its hold in adult society while becoming so prevalent in the world of school girls?

Jumpers boast some beautifully vital fashion basics. And it seems, that's what has helped propel them through the modern ages. They incorporate concepts like clean lines, layering, and separates. They are chic, classic, and come in a rainbow of fabrics and colors — again, their role as separates making them the sort of garment you can count on to add variety to your wardrobe, or to pair off with different blouses to achieve varying styles. And, as juvenile as some jumpers look, quite a few of the rockabilly and retro inspired jumpers evoke very womanly, even voluptuous vibes. Plus, just like a sundress, slipping a jumper on over a blouse and heading out the door is wickedly easy, and efficient.

With their rich history, practical design, and flirty style, what's not to love about jumpers? I don't know, I suppose you could argue that you don't appreciate the alluring way pleats cause fabric to fall, or the convenience of turning one dress into countless dresses with the simple switch of a blouse. Maybe you just don't like dresses... but then, there are jumper suits and jumper shorts, so, I guess maybe the jumper saw you coming with that one. Oh well, looks like you'll just have to embrace how adorably incredible jumpers actually are.